This Holiday, Give Thanks For Affordable Food - And The Farmers Who Only Get 8 Cents Of Every Dollar For Making It
By Hank Campbell | November 22nd 2019 02:01 AM | Print | E-mail

Hank Campbell
You know you are in a wealthy country when there are articles about how people are depressed if they can't get a $2,000 Macbook, young people can talk about how bored they are, and poor families live in more square footage than the middle class in France.

Oh, and a majority are fat, even among poor people. It was never before possible for poor people to be obese, abundance of food used to be a sign of wealth.

But just like we don't blame smokers for getting lung cancer, we don't criticize parents for their kids being fat. Urban food activists instead blame farmers. If farmers use modern pesticides or fertilizer or GMOs or tractors, they are killing Gaia with pesky science, all in the name of greed.

Yet if they were really greedy, farmers would produce less food, not more. Apple could easily produce enough phones for everyone at each product launch but they want you standing in line like some USSR peasant hoping to score toilet paper. And if factories actually controlled farming they would cut supply to increase demand and boost profits the same way.

Yet farmers don't do that, one of the many things urban elites who read Mother Jones get wrong about agriculture. America is not giant "factory farms" at all (1), it is mostly 2 million family farms. Most make so little income they work outside jobs to get things like health insurance, half of them only make enough money to pay their taxes.

How many of you would work if you paid 100 percent taxes?

That's why only about 0.4 percent of farm estates even pay estate taxes while Baby Boomers in other businesses are sitting on $9 trillion in inheritance.

Instead of getting rich producing cheap food, farmers only get 8 cents of every dollar. The rest of it goes toward shipping to your Whole Foods or Kroger or Safeway, it goes to corporate chain employees who have to throw the food out if it gets a blemish, because your special snowflakes shouldn't eat ugly fruit, it goes toward getting that free-trade, gluten-free, shade-tree-grown, organic lettuce into your hands.  It goes toward advertising those 61,000 Non-GMO Project labeled placebos. 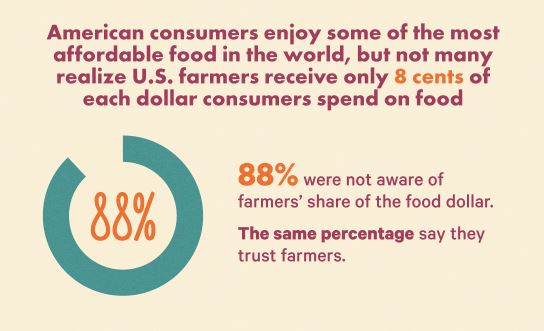 Despite what anti-agriculture activists like Organic Consumers Association and their allies inside the New York University Arthur L. Carter Journalism Institute hope to achieve, most people trust farmers, and they should. Be they livestock ranchers, dairy farmers, or organic onion growers, most farmers mean well.

Food trade groups might be another story. So this week and next, when you are told in a social media campaign to believe one chemical or process is killing you and only the alternative promoted by a different $100 billion market can save your kids from cancer, keep in mind that they are selling you a belief. Farmers are just growing the food, and for 8 only cents on the dollar.

Thanks for all you do, farmers. I defend you and I respect you, in large part because I could never be you.

I will have a Happy Thanksgiving and I hope you do as well.

(1) Though a compelling argument can be made that it would not be a bad thing.
Science 2.0
More Articles All Articles
About