Trace Levels Of Flame Retardant Chemicals In Car Seats Are Not Harming Your Child
By Hank Campbell | December 3rd 2018 11:44 AM | Print | E-mail

Hank Campbell
Marta Venier, an environmentalist at Indiana University, recently teamed up with a Michigan activist group to "test" car seats and declared they had toxic chemicals.

Obviously that is media clickbait but if you are reading here, you want to know science truth and will leave the fake news to Mother Jones. So let's get to it

In 2018, we can detect anything in anything

First, the chemicals were in trace amounts, and therefore harmless, (unless you are a homeopath and believe a molecule of acetylsalicylic acid  will cure your headache), and that is no reason for a scary press release. Nonetheless, Dr. Venier, armed with the Italian equivalent of a bacherlor's degree in chemistry (laurea) and who has spent her academic career trying to promote fear about chemicals, declares in their analysis that they found 15 "new or traditional hazardous flame retardant chemicals."

What does that even mean? No flame retardant has ever been shown to harm anyone - instead the lack of them caused numerous deaths due to flashover, fiery explosions when 100 percent organic solid wood furniture caught fire in rooms. Flame retardants in modern furniture caused deaths in house fires to plummet compared to solid wood. 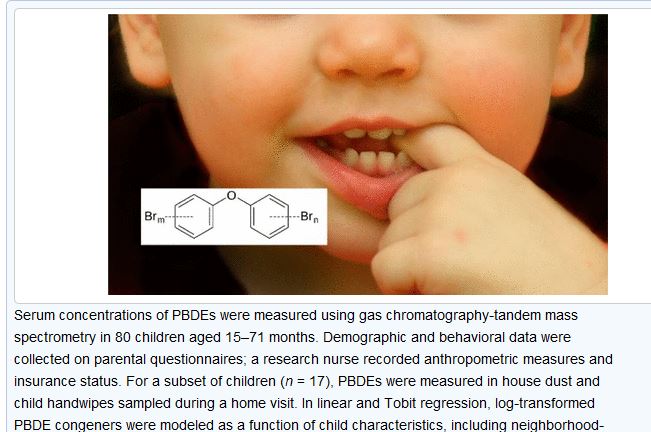 Yet in the modern environmentalism world, if you can detect a chemical, it should be declared toxic. These atoms can be detected, including in the body,  because the compounds are highly stable and can be stored in fat. Obviously fat is the biggest worry in fat but as environmental donors and politically sympathetic anti-corporate journalists become more removed from skepticism each generation, they instead readily believe minute levels of the brominated flame retardants known as polybrominated diphenylethers (PBDEs) are harmful, and the justification is because companies stopped using them. This stuff has been used commonly for almost 300 years, the first patent for a flame-retardant was issued in England in 1735. The Romans used chemicals, including PBDEs, to stop flaming arrows from ruining their wooden siege towers.

Companies stopped using them for the same reason ConAgra stopped using BPA in Manwich cans: Concerned parents wanted it and that is capitalism. The science caution at the time was that BPA is harmless but the replacements for BPA were unknown. And that is the argument in the paper - any chemical is bad, including newer ones that replace brominated flame retardants. "New replacement flame retardants, often marketed as safer alternatives, are lurking in children's products without rigorous safety testing and may pose risks for children's health," warns Venier - a quote which is the exact opposite of what biologists, toxicologists, and chemists know is true.

Perhaps she is lobbying for a job in Linda Birnbaum's National Institute of Environmental Health Sciences, where statistical manipulation to create new causes of cancer is prized.

Activists are in a war of extinction

What mainstream media won't tell you; these car seats were hand-picked by an activist group billing itself as the Ecology Center, and shipped by them from Ann Arbor, Michigan, to Indiana. If this was to be a science analysis with a legitimate prospective hypothesis, why not buy a random sample from stores in Bloomington and spare us all the global warning from shipping them on emissions-belching planes?

It's a science mystery - the solution to the mystery being the interest was in terrifying new parents at Christmas, no legitimate science was desired. And none is used in their claim. They insist that decabromodiphenyl ethane (DBDPE) "is a brominated flame retardant known to cause oxidative stress, hormone disruption and thyroid problems."

It's our recent friend Endocrine Disrupting Chemicals again, the 1990s boogeymen of Fred vom Saal and others who have made their careers getting paid to say that any chemical can cause changes in our hormones. Well, they are right. As I note when I write articles in the morning, the coffee I am drinking disrupted my hormones - these chemicals disrupt our hormones the same way a fly buzzing around disrupts the gravity of the moon. It is happening, it is measurable, but it is not meaningful.

Up above I wrote that chemicals that contain multiple atoms of bromine and chlorine don't burn very well, and here is the neat thing about solid stuff like wood. It doesn't burn directly at all. Instead, heat breaks down molecules and that releases carbon that reacts with oxygen (oxidizes) and burns.

You have heard the term free radicals and it is the same concept. Flame retardants are antioxidants and suppress the free radicals, slowing the combustion process or preventing fire entirely. That is incredibly safe during a fire.

Maybe that is what the chemicals industry needs to do - reframe the debate. People who deny science overwhelmingly love supplements, so if you note that a flame retardant chemical is an anti-oxidant for their car seat, they might feel better.