'Truthers' Are The Norm, Which Is Why You Should Stop Reading Scientific American Right Now
By Hank Campbell | October 23rd 2019 08:07 AM | Print | E-mail

Hank Campbell
Joel Moskowitz, Ph.D., of Berkeley is the kind of anti-science "truther" that even most west coast activists steer clear of, because he makes all of the social sciences look bad by association. Worse, he is a "social" psychologist, which for the last 20 years has been beset by fraud and retraction.

But at Scientific American, which has become the home of activist crazies, he fits right in.

They have published a new polemic against the modern world, this time instead of claiming we are overrun by Frankenvegetables and only supplements and alternative medicine will save us they are giving a platform to "cell phones cause cancer" Truthers, and Moskowitz leads the way. Since 2009 he has been to cell phones what Andrew Wakefield is to vaccines. Like Wakefield, he claims government is in on it, insisting California is hiding evidence that cell phones are killing us.

Moskowitz is the Andrew Wakefield of cell phones

Sure, the National Cancer Insitute has an entire page debunking his nonsense, but Scientific American does not care about that, and Moskowitz lumps NCI in with his Science Is A Vast Corporate Conspiracy narrative. Cell phones are non-ionizing radiation, it is impossible for those to cause cancer, but Scientific American doesn't need science, they will instead allow links to data dredging surveys where someone who got cancer mentions why, yes, they did use a cell phone. 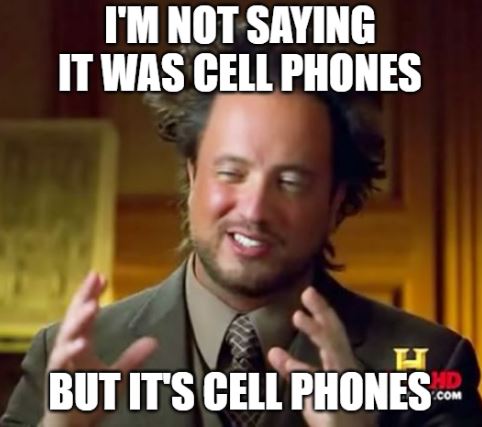 The energy per photon in the cell phone spectrum is too weak to break any chemical bonds, and our bodies are great at reflecting what little radiation there is. Physicists in 2019 are often too timid to speak in absolutes, it was hard even getting them to deny that the LHC was going to create a giant black hole and ruin earth (yes, that was a thing), so they don't like the word "impossible" but until there is an instance where it happens, it is impossible. Somewhere in a multiverse, I may be a French female riverboat captain, but in this realty I am not.

And the same goes for cell phones causing cancer.

Moskowitz and the people he supports claim cell phones cause autism in kids, and asthma, and ADHD. It's impossible to prove him wrong because it is just shoddy correlation. Have autism diagnoses gone up in the last 20 years? Yes. Has cell phone usage gone up? Yes. Therefore the latter caused the former because he can show two curves going the same way.

Why aren't we still testing railroads for harm to humans?

During the start of the railroad age, they first tested steam engines with dogs, because of the argument that no humans had ever gone 25 miles per hour so it might be risky. 19th century biologists knew it was impossible to be harmed yet the test went on. But after the test was done, no activist continued to insist that a railroad was going to create a "toxic cocktail" of effects over time, and that government needed to redo tests for 26 miles per hour, then 27, then 27.1, and so on.

Yet that is what Moskowitz and his fellow conspiracy theorists are doing about cell phones.

They don't know enough science to know they are wrong, so they insist they might be right and we just don't know it yet, but everyone should stop using cell phones while he becomes a highly-paid expert witness for trial lawyers who are waiting to sue everyone over anything.

Moskowitz doesn't just think 5G is the problem, he thinks all radio waves are killing us. And plants too.  Naturally, the Russians have been happy to support him. Propaganda outlets like Russia Today (RT.com) and Sputnik have been happy to promote his claims, just like they promote activists about GMOs and natural gas. America is their biggest competitor in Europe, so if they can support (and fund, using offshore donor advised funds that can launder the money anonymously) dissension among the American public at home, they won't have to worry about American competition elsewhere.

His paranoid 'science is terrible' posturing never survives a simple four word question that skeptics ask; "Where Are The Bodies?"

There are none. We should be keeling over in droves if 3G, 4G, Wi-Fi, and Bluetooth are all killing us

Scientific American, as always, will try to to shroud themselves in the air of "debate", yet we won't see them having open debates about anything that isn't a progressive darling for the organic food, supplement, anti-vaccine crowd that still read their magazine.

If you care about science literacy, you should simply take an ethical stand and stop reading them.
Science 2.0
More Articles All Articles
About