Hank Campbell
The 1948 Samuel Beckett play "Waiting for Godot" is about two people that are, as you can guess, waiting for Godot. They wait at a tree, but they have no idea who he is or if he will arrive. When the person they do not know and had no idea was ever arriving does not arrive, they decide to commit suicide using the tree, but give up on that because they don't have a rope. They say they are leaving, but stay. You get the idea.

It is the archetype of the Theatre of the Absurd, and it is everything wrong with existentialism, dystopian scaremongering, and postmodernism. It believes, as Camus posited, that we have no purpose other than what purpose we invent to do whatever we do. But because it is avant-garde, it sells to people impressed by terms like that. Lots of organic food marketing groups and alternative medicine hucksters sell products to people 'waiting for Godot' - magical totems.

If you buy food that only has pesticides they claim are free of chemicals, or plastic that has trace levels of a different "endocrine disruptor" than the one trial lawyers are suing about, and you don't get cancer, they assure you that their magical totem saved you. You didn't get cancer today, did you? And if you do get cancer, they can blame it on something else that you didn't buy a totem to prevent.

That is why '"Waiting for Godot" is the perfect metaphor for coronavirus, says an editorial in Disaster Medicine and Public Health Preparedness, from Cambridge University Press. No one is denying the disease is real or that prevention is important, it is the climate of fear being perpetuated based on incomplete information, and hyping each flash point, that is preventing an honest look at the situation, and real risk analysis. If it is as impossible to contain as some claim, is it truly absurd to keep turning knobs trying to fix it? That's like buying homeopathic cold remedies or whatever Chris Cuomo and his wife are hawking this week and being amazed your cold went away after three days. 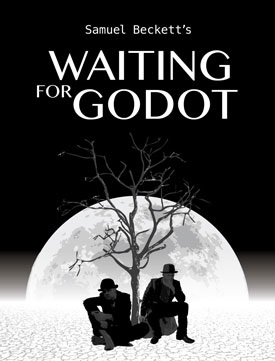 Beckett had to be amused that his work supported almost any interpretation anyone chose to make, and the rush to coverage, including in peer-reviewed journals, of every aspect of coronavirus also allows supporting almost any opinion or policy. It has clearly become the case that whether or not you affirm or deny a field of study or a paper or a potential treatment can be as much political as medical.

And in true Theatre of the Absurd fashion, people are suddenly clamoring for a vaccine when activist groups have spent decades assuring us all that Big Pharma is evil. Trial lawyers have successfully sued over baby powder - baby powder! - and that culture of fear about science and progress is why 50 percent of Americans don't even get a flu vaccine. Given all that, those people will believe a product rushed through clinical trials is safe?

On the other side, the argument is that products were never unsafe and added bureaucratic red tape and cost - brought on by politicians posturing after lawyers win jury settlements that may have had nothing to do with science - being removed is just going to make the regulatory world more normal. Why did hand sanitizers have to go through regulatory approval? It saved no one but created a bootleg market where FDA now pretends it's doing its job warning us about 100 terrible products that only came into existence because FDA wouldn't allow companies to make good ones without spending $100 million and five years in the approval system.

But in true 'Waiting for Godot' fashion, no one can be wrong in being suspicious. Critics say they will not trust a coronavirus vaccine made by the same companies they have been educated to believe are corrupt, and from whom they believe only government regulations provide protection. Others will argue that the people most likely to be harmed by COVID-19, the elderly and those with a confluence of risk factors, are least likely to be saved by a vaccine. It's a money grab under a health halo.

Individual risk, lockdowns, herd immunity, in true Beckett fashion, SARS-CoV-2 has an argument for everyone who wants to be for or against everything.

That would be fine, 'all of the above' might be a strategy except, the editorial argues, we're making decisions on incomplete information that have real consequences for children. The largest numbers of casualties in the war on coronavirus, it notes, will be the 55,000,000 school age kids who are essentially immune from it.

If COVID-19 is as hard to stop as it seems to be, the editorial essentially argues we are creating the 'illusion of hope' that Vladimir and Estragon sought while talking about nothing while waiting for a savior that is never coming. It is a dream while we wait for a totem.

Beckett might be horrified. Or proud. But no one who knows the loosely grouped work of the Theatre of the Absurd will be surprised that some people will insist that they know he would be one or the other.
Science 2.0
More Articles All Articles
About