What May Decide The Election May Not Be Abortion Or Inflation - It May Be Runaway Health Insurance Costs
By Hank Campbell | October 20th 2022 06:15 AM | Print | E-mail

Hank Campbell
When the federal government took over health care during the Obama years, a lot of promises were made while the concern when legislation was passed without knowing which parts of three competing plans would be implemented boiled down to high cost to get a million people insured who couldn't get insurance.

It ended up being worse than projected. Individual plans shot up 300% in just a few years and may never be affordable again. There are two big reasons the system is flawed, and they are why up to 40% of people will abandon their political party if a candidate on the other side says they want to fix the high cost of health care.(1)

First, like with automobile dealerships, government forces people to use their hand-picked designated sources, creating a de facto monopoly. It's an archaic system yet, with cars, Tesla has successfully gotten around it in most states while those that still force you to endure a dealership hide behind increasingly bizarre claims that letting you buy a car direct from Ford or GM leads to "unfair and deceptive trade practices" - which is instead what you get from car dealers.(2) 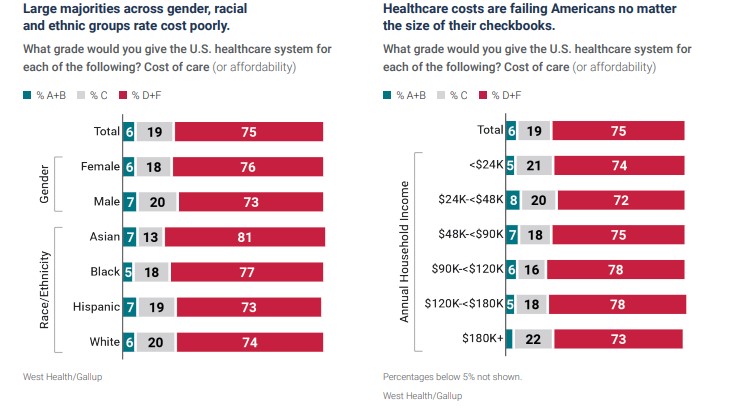 Health care should be allowed to be more ethical than car dealers, because we can't opt out of aging the way we can new automobiles. If government would allow insurance companies to sell across state lines, health insurance would be cheaper for everyone. California does not make Amazon sell me everything from a California company and pay 70% more, why does the state force that on people who need health care?

Second, health care costs should be a tax deduction for individuals like it is companies. The current "benefits" system is a relic of World War II, when Democrats in control froze wages to keep everyone focused on winning against the Germans. Lacking any way to compete for workers using salaries, companies began to offer other benefits - like health insurance. Those are a sunk cost for companies yet as an individual you can only write off medical expenses if they exceed 7% of your income. Individuals who don't work at companies are now paying 300% more for health insurance but unless they create a company they can't write that cost off.

There are other reasons for high costs - defensive medicine, because we won't engage in tort reform and prevent lawyers so shady even environmental groups think they are sketchy - and politicians advocating that everything be covered under health care - but that lawyer part won't get solved while the other would be if companies were allowed to compete in health care the same way they are in food. Instead, government treats health care as flawed as they do the internet; everyone gets overpriced, equal access they may not want or need.

Costs we all knew would be in defiance of rosy claims when politicians were forcing this on us are why 74% think the system is broken. Black Americans and independent women, two demographics that Democrats insist should be in the bag for them, are the most likely to flip, and the reason is economic mismanagement by progressives.

Which means the real thing keeping drug costs high is the federal government.

We know well how insulin works, just like we know how an epinephrine needle works. Yet if I want to compete in the insulin market or with the corrupt toadies running Mylan and their EpiPen, I have to go through FDA approval like I am claiming to cure cancer. It will cost me $1 billion and 10 years of time to create a generic form of something that we know well.

Yet people voting in November are not going to know all that unless they read this article, so please share it if you like. And if you appreciate our no-nonsense takes on issues, please leave a donation using the block on the right.

(1) The worrying sign for Democrats is that 50% of Independents and 40% of Democrats are willing to flip. Far fewer Republicans will, but Republicans tried to gut Obamacare numerous times so a flip for them would mean more high costs, making it unlikely.

(2) Two local dealers are near the top in the state for being the most unethical and marking vehicles up (Folsom Lake Ford and the even higher one in Roseville) and California protects them from capitalism that would put an end to their corruption.

Like 1950s mob bosses, car dealers claim to be capitalists while using government to protect themselves from the free market. At least until old politicians retire. 67% of Generation Z who endured it once say they will not use a dealership again.
Science 2.0
More Articles All Articles
About