Why Is Illegal Immigration - And Everything Else - Once Again More Important Than Science?
By Hank Campbell | January 20th 2018 10:00 AM | Print | E-mail

Hank Campbell
Yesterday, Democrats in the U.S. Senate which, along with the House of Representatives, form the two chambers of Congress, which are one of the three branches of government,(1) refused to fund a "continuing resolution" to essentially keep funding government as is while a long-term budget is negotiated.

Once again, there are a few claims that this will mean catastrophe for science funding, but many are now saying shutting down government is necessary and even courageous. Yet this exact same event occurred two, four, five, seven and even 22 years ago and it was framed as reckless and dangerous and a disaster for science.

What is different? Those other times a Democrat was President and Republicans were balking.

It may be coincidence that in those previous cases few in media noted how ridiculous the posturing was. In my USA Today article in 2013 I referenced TMZ (no, really) because they poked fun at how hyperbolic the claims were against Republicans by the science community:  "Ann Romney: She's the reason we're not able to make sure there's still not water on Venus right now."

Not everyone on Twitter was convinced this was really a crisis-level disaster either, to wit Joe Weisenthal‏ of Bloomberg slightly tweaking the Obama administration: 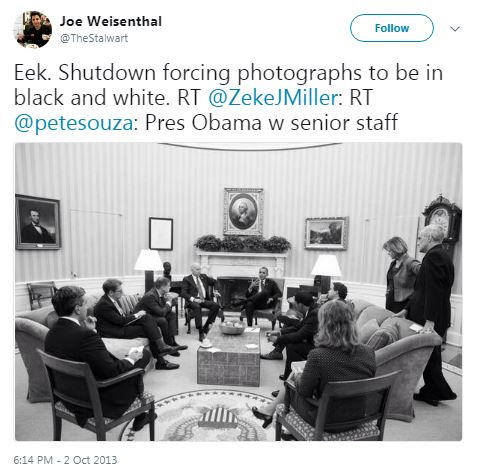 And it isn't a crisis, though it is being spun as one once again, mostly to annoy people. Want to visit the Statue of Liberty today? Well, you can't, because politicians want us to believe that employees there, or at Ellis Island, or other monuments, line up every morning to get money from the federal government, and so those must be closed. Even privately owned museums like Mount Vernon, the home of our first president, George Washington, are shut down. Government manages the parking lot so they closed it for effect.

In science funding, panic is already setting in also, but even though it is Democrats blocking the continuing resolution this time, science media are once again blaming Republicans - just like they did 2, 4, 5, 7 and 22 years ago, when a Democrat was in the White House. They are blaming Republicans even though it is Democrats who have held the funding resolution hostage to an effort to prevent illegal immigrats from deportation, the Deferred Action for Childhood Arrivals (DACA) policy, which the Obama administration created but wisely punted to his successor to formalize permanently. Instead, his successor let it expire.

In widely-publicized instances, these are people who came here at a young age, so their parents were breaking the law and not them, and they have never known anything but America, they are culturally American, so there is a great deal of sympathy for them, but if you ever wondered in the past why George Lucas sued students who made fan versions using his "Star Wars" characters, you learned it isn't because he hates kids, it's because if laws are enforced selectively, the ability to enforce them at all is completely invalidated. They are automatically considered discriminatory. 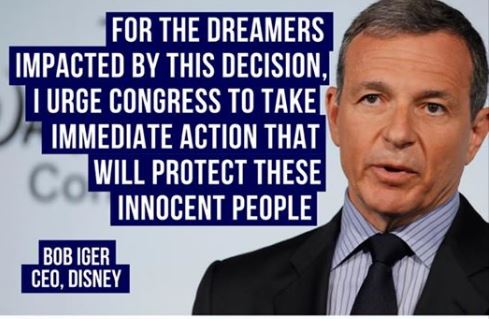 So if you innocently sneak into DisneyWorld, his company won't throw you out?

Immigration issues will need to be untangled but should academic scientists, overwhelmingly Democrats for three decades now, support shutting down science to defend illegal immigration when they never supported shutdowns for anything else? That looks like putting political party before science, the last thing academics want to do if they want to be regarded as a neutral force for public good.

Instead, academic scientists and science media are already circulating stories that the Panda cam will be shut down, and science will be set back years. In 2013, the Obama administration deemed fewer National Science Foundation personnel as "essential" than staffers in his White House. He only kept security guards and some IT people at NSF, who were apparently managing the cameras they shut down anyway. A pretty important thing called CRISPR took off that year, somehow the shutdown did not prevent that at all. The Obama administration sent home 20 percent of the federal government during the "sequester" but kept 97 percent of NASA off the job. What about an asteroid hitting us, which we are being told is something to worry about, which will be suggested is thanks to Trump. Could NASA stop an asteroid even if they were there? Nope. We can't even go back to the moon without $20 billion dollars and 20 years, despite it being done in the 1960s with the computing power of a Commodore 64.

But even though only a relative few regular government employees were sent home last time, yes, it is right for government scientists to be concerned about their paychecks, but Republicans were not to blame then. Just like this time. Science is being used as a political pawn, by the politicians they support.

The Centers for Disease Control and Prevention are trying to get journalists to put pressure on the President by telling us they can't notify the public about "major food borne illness" outbreaks in an email. Apparently, no government employee is willing to go rogue against the Trump administration and press a "Send" button to save lives. Even less of a reason to worry; just before January they notified us about contaminated lettuce from early November. So even if they needed per diem money each day to open the doors or click "Send" on an email, an outbreak that happens this weekend wouldn't be known about until March. How should that really concern us?

One thing no one will be concerned about outside Capitol Hill - the lack of towels. Even though we all know it is part of the political sideshow, just like claims science will be set back:

Members also complaining to me that the House gym lacks enough towels this morning and they wonder if it’s because of the shutdown.

(1) That all sounds confusing but it usually works quite well. In simple terms, three branches prevent any one group from gaining two much power. Congress has one chamber that is decided by population, so California has a lot more representation than Vermont, but even in 1787 the founding fathers knew that "tyranny of the majority" could be a problem, so the other chamber provides equal representation to states (two Senators) regardless of their size. Congress can pass a bill but only a President can make it law. However, an obstructionist President with a veto of a bill can be overruled if enough in Congress want it passed. Then the third branch, the court, is there to make sure the law is legal.
Science 2.0
More Articles All Articles
About