Hank Campbell
Is honey healthier than bleached white table sugar or brown sugar or high fructose corn syrup? If you ask people selling nutritional fads yes, but if you ask your mitochondria, sugar is sugar. It's the total, which means calories, that matter. in our increasingly wealthy, sedentary society.

Yet government standards use "one size fits all" population level metrics and though they are meaningless to individuals, they carry outsized weight for people and companies, so when new Nutrition Labels were posited by the U.S. Food and Drug Administration, it created mass confusion, because they wanted to separate out added sugar. This was part of the nanny government approach to nutrition we've allowed to occur, where the 2015-2020 Dietary Guidelines for Americans are aspirational and only 2 percent of Americans will ever abide by them, most without any ill effect, but everyone feels like someone benefits from them so they're important to have. (1)

Companies that sell honey, maple syrup, and other syrups were in a panic about the new label. Given the new requirement, consumers could easily think those all had added sugar, instead of being almost pure sugar. Biologically, it is meaningless, if you consume too much sugar whether it has been added or not is irrelevant, but since honey is basically pure high-fructose sugar in its natural state it is wrong to call that added sugar.

Then the Agriculture Improvement Act of 2018 declared that Nutrition Facts labels couldn't require the declaration of the gram amount of Added Sugars for single-ingredient sugars like honey and syrup. So FDA and USDA were in opposition.

This not in the world of science, despite FDA claiming they are following the latest nutritional science, this is the world of law and lobbying, so the new clarification is a compromise solution. It helps no one among the public, it is the kind of United Nations "split the difference" thing government does. And the Declaration of Added Sugars on Honey, Maple Syrup, and Certain Cranberry Products reads like a UN document:

These kinds of compromises using population level statistics (what is the right amount of salt for you individually? How about sugar? Fiber? No one knows unless they get a problem) are not helpful, unless you also accept that on average humans have fewer than two arms because some people are missing an arm. You certainly shouldn't make government policy for individuals based on averages or we would say that every American should own 1.1 guns.

The problem with this compromise aside from its arcane nature is its capricious one. Cranberries have almost no sugar, they are very tart, but the cranberry industry argued that even with sugar added they didn't have any more added sugar than other fruits had naturally, so they wanted to be exempt.

And FDA agreed, added sugar is only added sugar unless they waved their magic chemical wand and declared it is just like natural because lots of fruits have natural sugar.

If the goal is to allow consumers to make "informed choices" about their diets, then give them valid information. Sugar is sugar, calories are calories, added sugar is not suddenly natural sugar and therefore has a hint of being somehow healthier because Big Cranberry complained. Fruit is not a healthier source of sugar than anything else.

If I add vitamin C to a Dr. Pepper soda, I have created the nutritional equivalent of orange juice - with no more sugar than a cranberry juice cocktail. It would be helpful to the public if FDA focused its efforts on getting people to achieve energy balance, that your intake needs to match the calories you burn, rather than having small obese people mystified because they eat 1900 calories a day, 100 less than government says they should eat, but still gain weight.

(1) Government separated out trans fats in 2006, for example, and it didn't make anyone healthier, since people who eat pie and donuts don't see the label. And trans fats became the rage because government nutrition panels had declared saturated fats the problem a generation earlier. 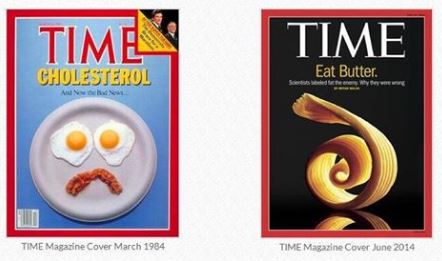