Hank Campbell
Fermilab, now a tourist attraction, found the Higgs Boson before the Large Hadron Collider did, but the lack of comparative luminosity made it a struggle to know that as quickly as the LHC did.

That's why the discovery of a star by Hubble 28 billion lightyears away, a new record, may not last long if everything goes as planned with its long-delayed successor, the James Webb Space Telescope. It's so far away that Hubble can't tell astronomers if it is even one star or two, because statistical blips in the data need more clarity that a deeper space telescope will provide.

The star, nicknamed Earendel (“morning star”) by astronomers, may be up to 500 times more massive than Sol, and was detected using gravitational lensing. Einstein's theory of relativity said that, as John Archibald Wheeler boiled it down, space tells matter how to move and matter tells space how to curve.(1) When light is near the Very Large stuff out there, it curves. 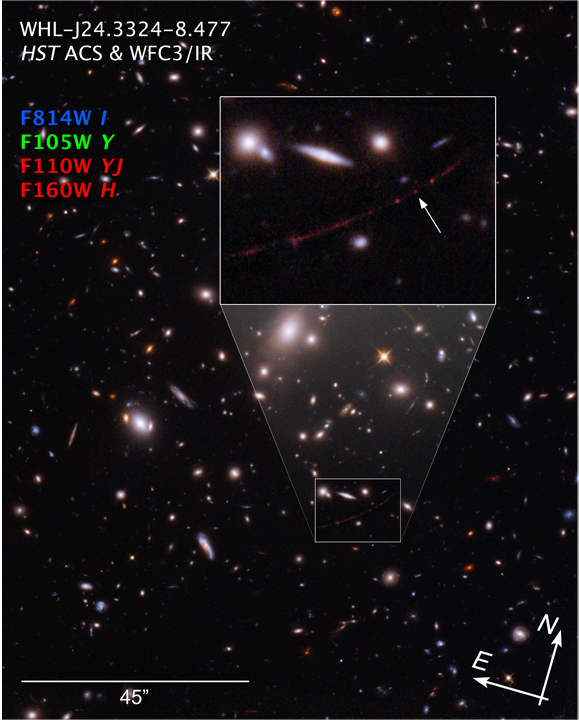 In this instance the massive object was a whole galaxy cluster, WHL0137-08, and the deflected light fortunately pointed to the 1/250 of a degree Hubble could see. Earendel had its light magnified enough to be detected. If that is not good fortune, I don't know what is.

The light was emitted when the universe was less than a billion years old, and in the nearly 13 billion years since it is now 28 billion lightyears away.

(1) We can punt the spacetime part for this. It is often just picayune clutter that confuses the public and has led to theoretical physics being overrun by time travel science fiction. Wheeler would object to my truncation, though, and without Wheeler, interest in general relativity may not have come back so strongly after World War II and Einstein might not be misquoted on all those sociology posters as he is now. We also might have still gotten the terms 'black hole' and 'wormhole', at least if you are a theoretical physicist hoping to get on TV waxing philosophically about the multiverse, where Marisa Tomei came up with those.