Hank Campbell
The U.S. Centers for Disease Control and Prevention (CDC) were shown to be a bureaucratic mess when the coronavirus pandemic hit - refusing to send coronavirus tests unless hospitals first proved proved patients had coronavirus, then sending faulty reagents - and academic epidemiologists often seemed to be just making things up, but one area came through nicely; academic medicine.

Medicine, along with the life sciences and social sciences, are areas where women dominate in graduates but because leadership positions are often held for lengthy periods, when it comes to the top levels the numbers aren't the same. Men are in control.

That's why 79 percent of academic hospital medicine programs are run by men, according to a recent paper in the Journal of General Internal Medicine, and males are more likely to be full professors. We know the shackled man theory - it isn't enough to take the shackles off a hobbled competitor 100 yards into a running event - because of racial issues but it won't be any different for gender or any other demographic. Today, when it comes to overall academia, women are more likely to be selected than men for high-level positions but faculty jobs are a small percentage of the academic work force. And men were not fired, they have tenure, so normalization has been slow because it only happens if someone retires or dies. Women are not shackled any more but they came off far into the competition.

What about in newer medical areas that don't have entrenched constituents? The new analysis is of "hospitalists" rather than general doctors. As government has increasingly taken over health care, private practice has become more expensive and more cumbersome so many physicians who are trained in internal medicine go right to work in hospitals - no outpatient practice. Because that's only recently been considered a distinct field it doesn't have legacy leaders who will stay in jobs for decades.

Yet the demographic  issues are similar. The recent survey of academic hospital programs, collated via the Association of American Medical Colleges, isn't conclusive but the exploratory findings are compelling. Of the 135 programs the authors found, 80 responded to questions about the gender of the "hospitalist" leader, its size, and then more subjective perceptions about promotion and faculty development; an obvious confounder.

Oddly, given these programs are often under 20 years old, 37 percent of male hospitalist leaders were full professors while no female hospitalists were. And 79 percent of program directors were male even with no meaningful difference based on area of the country, funding, or institution type. 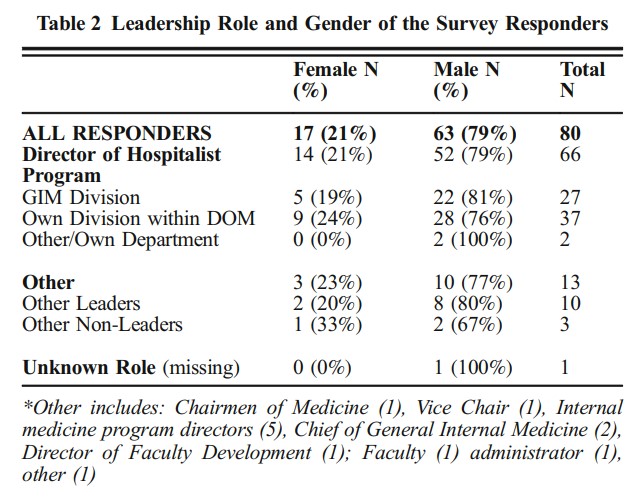 When it comes to gender differences the other way in social sciences, or political conservative representation across academia, it is said to be self-selection rather than bias, but that is an unconvincing argument. As if people self-select out of high-paying tenure jobs. And self-selection - that women don't want the responsibility, want to do more at home, or want to compassionately care for patients rather than running departments - is equally suspect here when exposed to reason.

It also misses a bigger issue; what do we miss in creativity and deduction when everyone around us is just like we are? If we create a tribe who look like us, or think like us, or have experiences just like us, and rationalize exclusion as those being excluded are just not smart enough or hard-working enough, we're not really any better than people who go ahead and admit to bigotry on surveys.

Would coronavirus response have been different if people in communities with greater co-morbidities and who suffered outsized illness and deaths had greater representation? It's all speculation at this point, virtual lives lost claims are insulting to those who really had losses, but in 2017 a team of us wrote "The Next Plague, And How Science Will Stop It" (download it free here) and included the chances of it being coronavirus because we knew one was coming. And one will be happening again.

The definition of insanity is doing the same things and expecting different results, so maybe in the lull between pandemics - coronavirus alone went from 9 years between the first and second to 7 between second and third so it may become an annual event like flu - we should think about doing things differently across the spectrum. Rebuild CDC for the 21st century, no more centralized authoritarian control by career bureuacrats that results in needing 6 weeks to tell us about E. coli on lettuce, etc. Change the mix in leadership in all fields related to disease. Stop producing scaremongering claims about trace chemicals and food.

Let's get people back to trusting science. All people.

We may not need to go out of our way to create quotas for women, people of color, the handicapped, or Republicans in academia, but we're doing the world of science and medicine a disservice if roadblocks are placed in their way. And roadblocks, including implicit ones we deny because we happen to know one person in each group, is what needs to be examined. Numbers are only telling the 'what' of the story - we need to think about the 'why' as well.
Science 2.0
More Articles All Articles
About