Hank Campbell
No one is for child labor but people are unfailingly for lower prices rather than higher. That is why the organic industry is a tiny fraction of the overall food market. With no benefit other than paeans to health halos or holistic beliefs about urban people about farming, most remain unconvinced.

What if it eliminated child labor? Nearly everyone would agree to that - unless they believe paying more would just lead to more profits by exploiters in developing nations.

That is the problem with a model created by academics. They can conclude a price increase would eliminate a problem, but it is in defiance of real world behavior. Current Ghanaian law already prohibits child labor but children still farm and in 2015, it was estimated that just under 40 percent of children were working in the cocoa sector. Many cocoa farmers live in poverty on small plots and need children to work in order to earn enough for their families to survive.

When America was an agrarian country, kids worked on their own farms also. That changed when people got off sustenance farms and food got cheaper and they had enough to buy basic necessities and leave poverty. 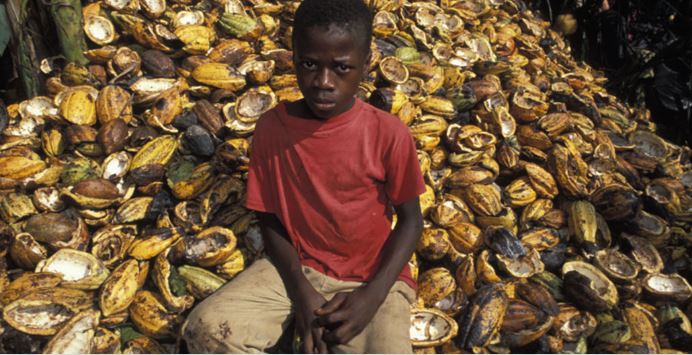 What to believe? In 2016 the Obama administration applauded Ghana for having made significant strides in reducing child labor after controversy the previous decade.

The authors of the paper (one is from Ghana) say paying more for cocoa would solve the cultural problem because they believe kids working to grow cocoa are not a result of poverty, they cause it - kids quit school to work in cocoa orchards. And a 2.8 percent increase in the price of cocoa would begin to fix it. But the model assumes that the higher price will offset the loss for the household that no longer has child labor. And it would, if that money actually reached households and no one wanted to improve their lives rather than maintain their current state of poverty. That is the problem with numerical models that use a limited number of variables in a world where variables are numerous. It is in defiance of behavior.

When you are looking at two products side by side on a grocery shelf and one is 47 percent higher, it had better come with a compelling story. 47 percent more would demand accountability - some proof that the increased money was actually going to help kids and improve results and not simply line the pockets of the distributors who sell to the world.

America and Europe are an example of switching from poverty and child labor to developed economies. Wealth for everyone increased when larger farms were created, replacing smaller farms in America and the feudal serf system in Europe. In places like Mexico, and in Ghana, government policies claiming to protect family farms actually prevent efficiency and the ability to negotiate, because small farmers cannot scale. They are forced to work on farms because costs for food remain high. It is when food and energy, basic necessities, drop in price that more wealth is available and improved culture takes hold. Attending school becomes the norm. The Tennessee Valley is a great example of how when a basic necessity, in that case energy, became cheap, culture changed in a single generation. Once they had cheap energy food became efficient and suddenly there were libraries.

America and Europe did not just raise prices for food 47 percent and see kids run off to school, we drove the cost down using free market principles. And that is a better model for Ghana than using the same government policies which created oppression to make well-connected oppressors richer.
Science 2.0
More Articles All Articles
About