The American Physical Society’s April 2020 meeting is being held as an online event this year due to concerns over Covid-19. This is also true for school and for many people work. Many workers do work which is essential and which cannot be done remotely, and they are very important to the rest of us surviving this situation right now. That said, in 1990  stating that by 2020 a large percentage of the population could work from home, and a majority would have at least a basic ability to communicate face to face while holding productive meetings by computer, you would’ve been writing science fiction. A side effect of the coronavirus is that it has forced us to break with the old traditional habit of having to travel to do office work, travel to attend a meeting, or travel to go to school. After this is done there will be people who will still want to travel for such activities, but I predict it will be optional. It may even become a privilege of sorts to actually travel to meet face to face, or something which is only done on a special occasion.

The American Physical society APS had to cancel their March 2020 meeting because the closures of the states in the United States of America occurred without enough notice to make it an online meeting in a meaningful way.  A big science project I am a small part of, the Laser Interferometer Space Antenna LISA has been having large online meetings via Zoom teleconferencing for a while.  This is a viable option for most regular meetings. Zooms privacy and government level security issues aside unless one is discussing nuclear secrets Zoom will work just fine. The APS has gone a step further with a very well-done website which looks good on every device I have tried it on. 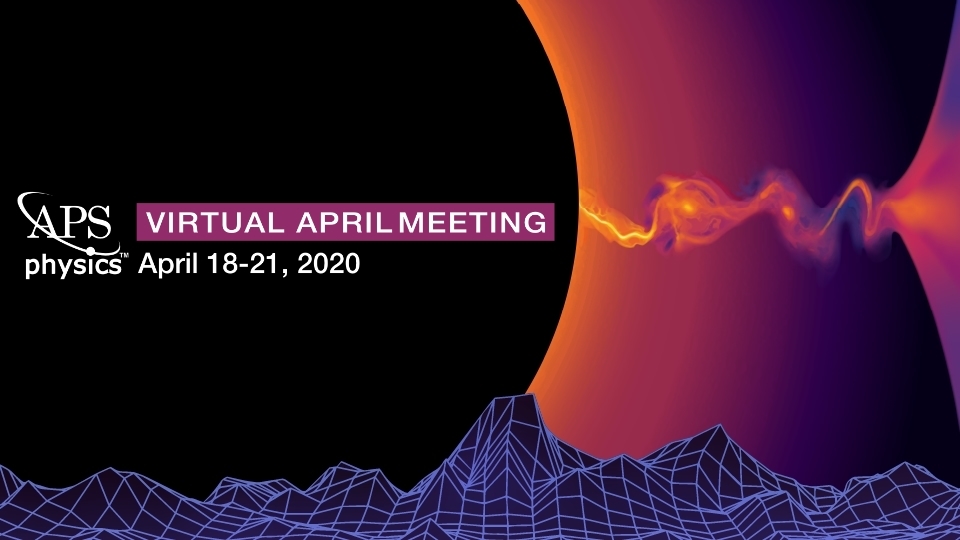 There will be talks both live and recorded, networking specific online meetings, undergraduate talks, and poster sessions.  Having traveled to present at the meeting in 2019 the travel experience is nice. It is like a little vacation to go and talk to people and hear about a subject I am interested in. To meet in person just as a happen stance people whom I may only know by their names on papers. Travel could also be a hassle. A flight can be canceled, weather can be foul, hotel rooms over booked. Rental cars not available. Then when you get to the conference you find a hostile audience. That hasn’t happened to me but It could.  (Plus I know how to disarm a hostile audience.)  The big hassle of meeting in person is that it cost a lot more than meeting online.

If the APS meeting is a success, then it is likely that we will see similar meetings moved online completely for the rest of 2020.  In 2021 people may want to go back to in person meetings.  Then remember how much of a hassle it is.  Undergraduate, graduate students, post docs, and adjuncts who make very little money will wonder why are we paying upwards of $500-$1000 to travel within the United States of America or within Europe to go to a meeting for a brief talk, or even just to attend.  Many will ask the following questions.

“Why can’t we meet online, at least those of us unable to attend for a good reason?”  “It was done a couple years ago when the powerful people needed it. Why not now at least as an option?” “Meeting online would be more accessible to minorities, the developing world, the disabled, and the elderly.”

Those who insist on an in person only meeting without options that treat online attendees as first class citizens equal to those who can afford to come in person will have some explaining to do.

In many cases what is to be done at work or at school is knowledge acquisition and manipulation.

The effects of this on education and work are going to be profound. The same concerns noted above with accessibility and cost will apply to work and school. One of the biggest obstacles to finding a job can be finding a job that is close enough to where one lives that it the commute is reasonable. One of the biggest obstacles to college attendance can be the cost of room and board not of tuition and fees. When the actual task one is doing is knowledge acquisition and manipulation, and not hands on, a commute will not make sense after this for a lot of people.

Many people limit their job search to how far they can travel in a period of 1- 3 hours, each way. In the Chicago area there are some people who commute six hours per day. Often by our commuter rail system Metra, not the famous L. On the L they may commute from the northern most reaches of the city or near north suburbs to the farthest south side of the city.  A commute that may be an hour and a half each way.   Then those of us who drive the expressways. To get from Bellwood, Illinois a close suburb of Chicago to downtown can take up to an hour with the usual rush hour traffic. In truth, commuting by car into Chicago and cities like it feels less like driving and more like waiting in a line 20 miles long.

The same considerations apply to school which many in Chicago attend by commuting to campus. It cost money. For me travel to campuses was a day long expedition. I would go and spend all day from sun up to well into the night on campus.  There is a cost to that.

Welcome to the Future.

This was foretold and we are now living in it. It is only too bad that a terrible pandemic that it seems may have been under study at a lab (not necessarily created could easily have been studied as a way to get ahead of the pandemic it could cause) had to escape.  This event has forced us to confront the fact that we no longer need to travel just to meet and interact in meaningful ways.

TLDR Do you realize we are closer to the future predicted by Demolition Man than to the year it was released in?