My tiny mostly Black suburb of Chicago has 446.7 cases of Covid-19 per hundred thousand.  A very disproportionate number of Covid-19 deaths have been of Black people.  Deeply ingrained structural and cultural anti-Blackness has meant that Black people often suffer racial disparities.  The Covid-19 hotspot of Bellwood, Illinois, my hometown shows how complex these issues are.  The Black community of Bellwood IL breaks many of the stereotypes and which has overcome…days ago.  That said the history of racism is a factor but no one White made any choices that directly lead to Bellwood becoming a virus hot spot.

No one did this to us. Due to bad adaptations to the social conditions of slavery our people spread misinformation on social media because we learned as a culture not to trust the authorities. Even if it looks more and more likely this virus first made the leap to humans in an accident in a Chinese lab which was studying how to fight one of these viruses. 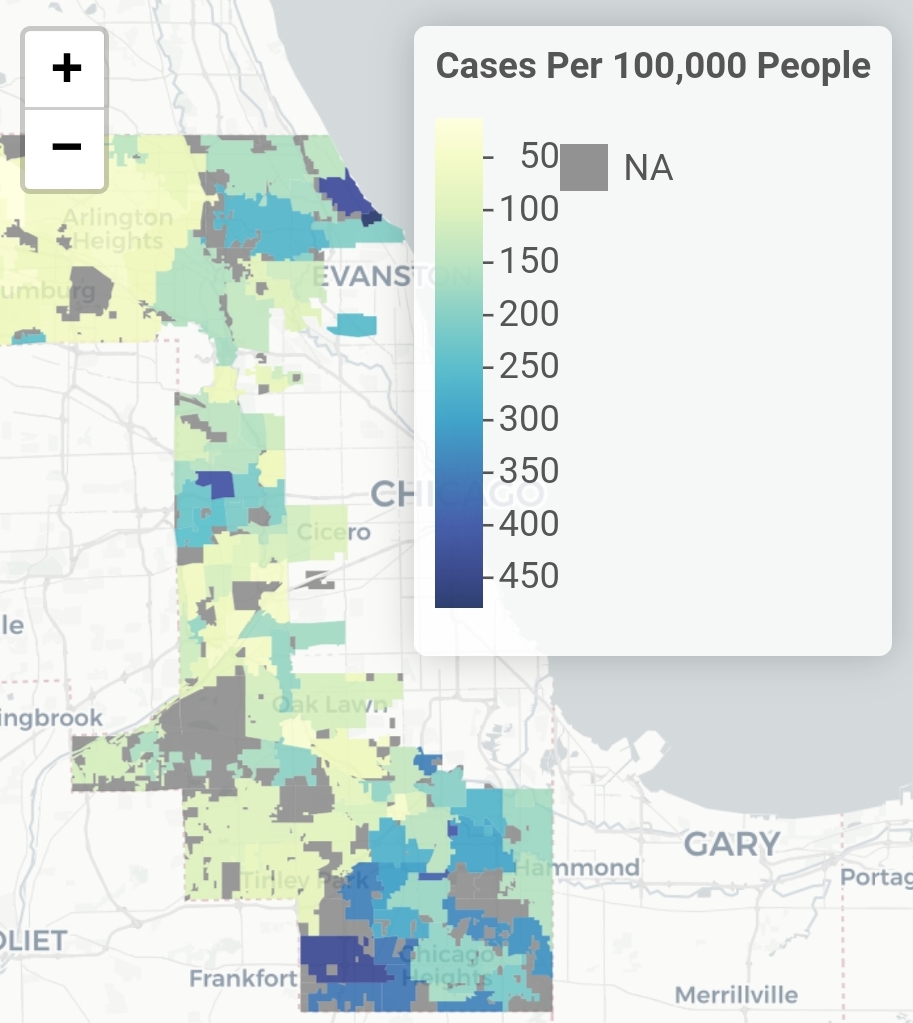 A coronavirus hot spot Bellwood IL is a suburb of Chicago easy to find on this map as it is the dark blue zone directly to the west of the city. About 80% Black but middle class in most respects. Inspite of better than average access, resources, and opportunity still this area is disproportionately hit. This is a combination of choice, the racial history of the United States, and perhaps a concentration of elderly residents. A local church had services on the 15th of March and by the 20th the pastor was dead.

Not All Black Areas Are In Poverty.

Bellwood is a western suburb of Chicago which like many at this range is mostly Black as well as with many Hispanics (of every color) and non-Hispanic Whites.  The community is 80% Black but very much integrated and has been since the 1980s.  The Median income for a household or family is about 55,000 per year.  Most of the homes are houses with not a small number of apartments of the two bedroom or more variety.  Rent in Bellwood is not cheap.  We have two companies offering broadband cable or fiber internet…at worst very high speed DSL.  It is centrally located 30 to 45 minutes from downtown Chicago, O’Hare, and Midway airports.  Two astronauts were from this tiny suburb and even now that it is mostly Black the level of college attainment is probably about the national average of 35%.  The crime rate is below the state and national average so far this year as it is most years.

A nice, average, midwestern suburban place to live that just happens to be mostly Black.

This is the false or unhelpful information I have seen spread around social media.

Thinking prayer will protect from disease is hardly new or unique to African Americans.  Around the world starting in China it was thought by some that traditional Chinese medicine could help.  In some literature the Chinese government even recommended it as part of treatment. In Iran communal salat was held and resulted in many people getting infected.   Now here in the United States of America we have people who think that being super duper Christian will protect them from a virus.   Through slavery religion gave hope.    Church services were one of the few places where we could gather in a large group and be as human as anyone else. Not to mention how many civil rights leaders were religious figures.

In relation to Bellwood, Illinois, this small suburb of 19,000, the local Baptist church held services up to at least March 15th. The Village of Bellwood also held a public board meeting on March 18th.  If just one person had the virus in our small Baptist church, or that meeting room in village hall, that one person would’ve infected everyone there.  Since that point they have carried on services remotely.   The Village of Bellwood has conducted meetings remotely. People become pastors and preachers to offer spiritual help and comfort to others so that is likely a strong motivator.  People run for public office in such a small village as ours for the same reason.   From what I know of the man the pastor of that church was a very good man, and a veteran, and just wanted to serve people who needed spiritual comfort.   By March 20th he was dead at the VA hospital in Maywood, IL the cause is not publicly known.   I suspect, I strongly suspect that meetings like those were a hotbed of infection. 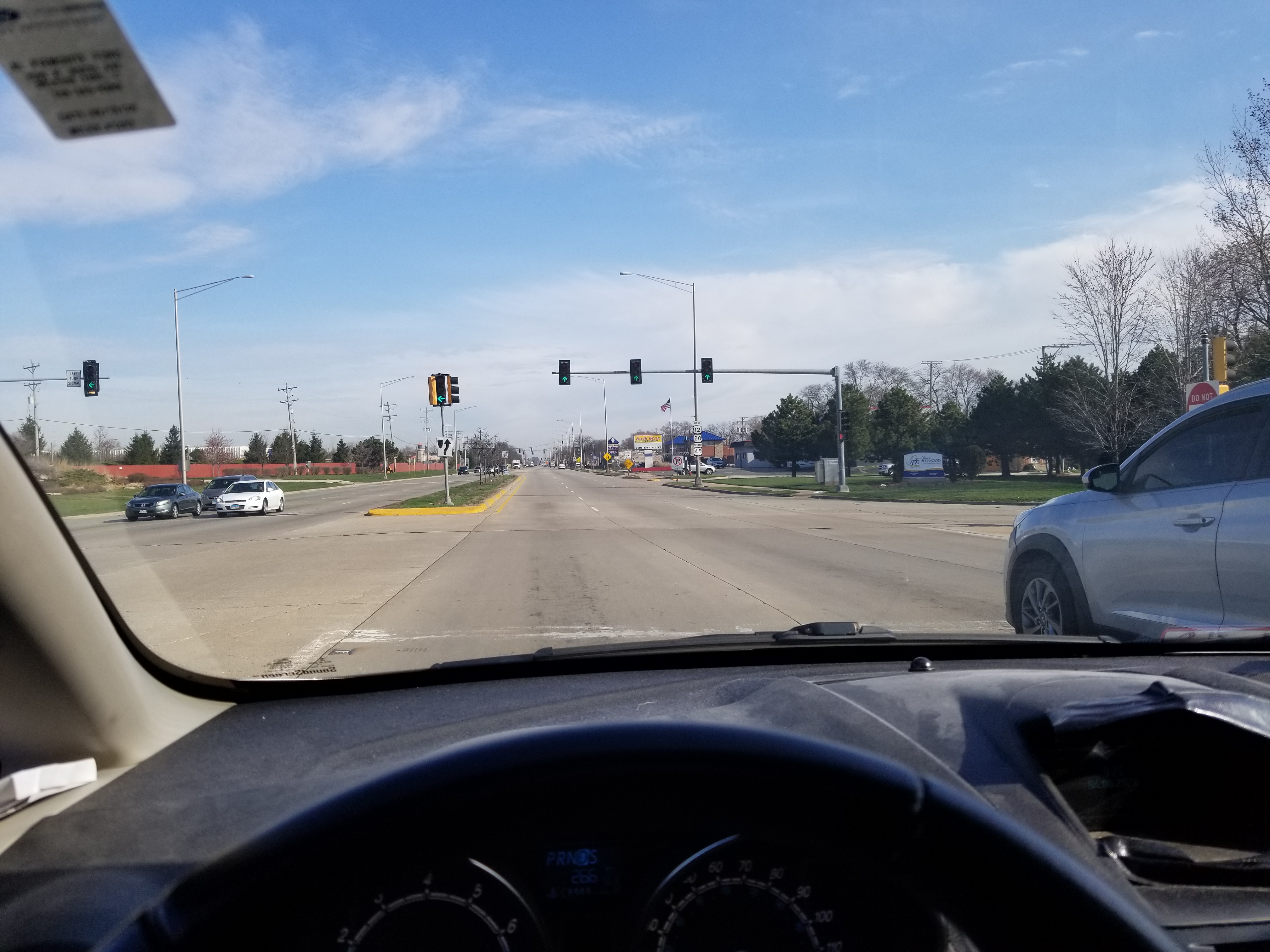 This started with either a mistranslation of words from Chinese doctors about how well a Nigerian man in Wuhan China recovered or from some of the horrible anti-Black sentiments present in China. The traction this gained on Black social media is rooted deeply in history.  We are taught that part of the reason our ancestors were imported was due to being resistant to infectious diseases.  Being something less than fully human yet also knowing or being able to learn useful skills up to a point.  Some of us have embraced this idea that was once used to dehumanize us.  The idea that we were resistant to disease in a way not unlike the horseshoe bats of China which naturally carry corona type viruses. 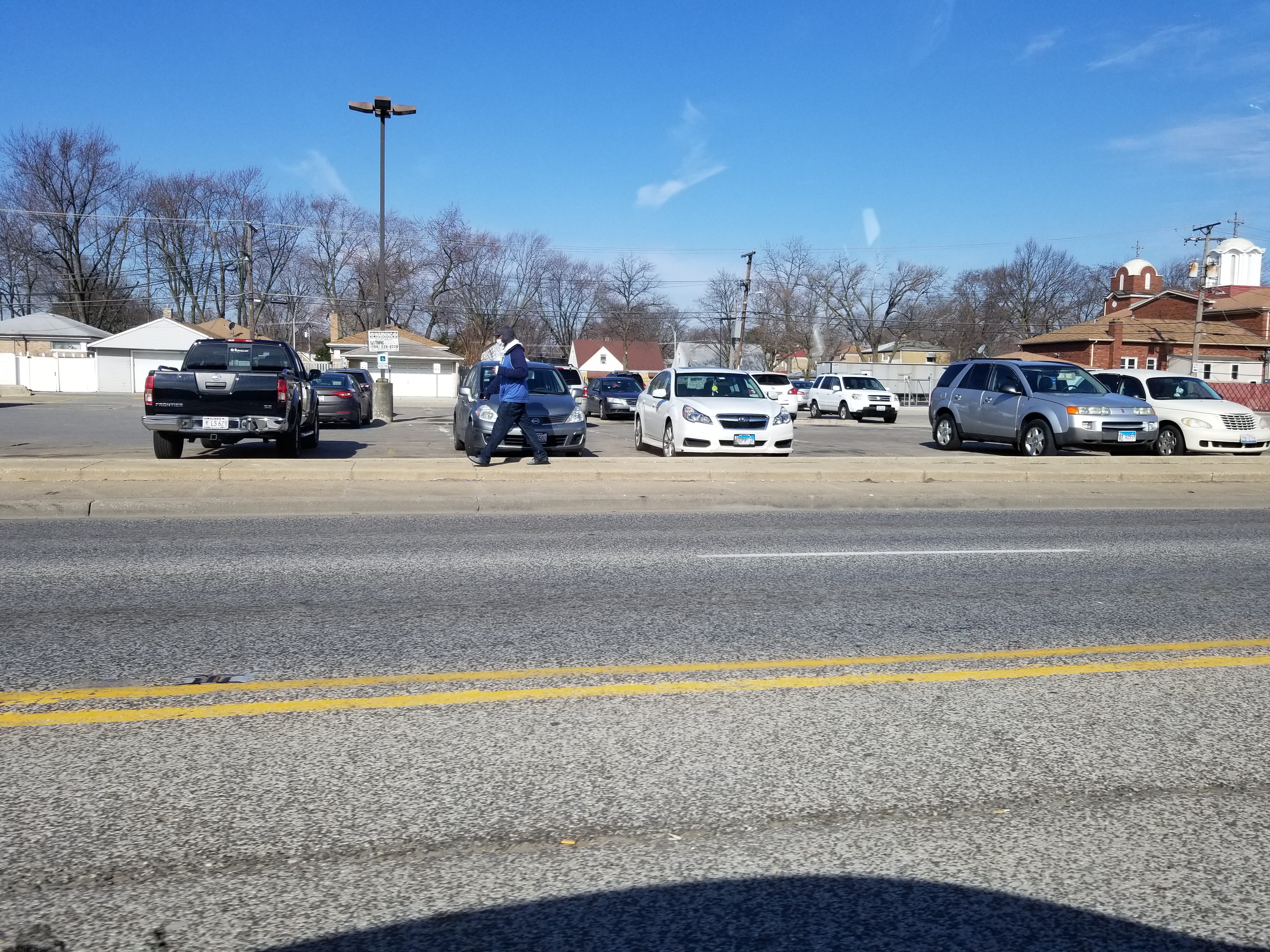 This is not exclusively a belief on Black social media.  However, it has gained a lot of traction.  That Black people more easily believe these things is not because of ignorance.  To say that is to ignore the long and scandalous history of enslaved Black people being used for medical experiments.   MK Ultra was a CIA experiment in mind control done even on Harvard students like Theodore Kaczynski. The use of Agent Orange, a powerful defoliant meant to kill plants near the roads in Vietnam, which it turned out caused cancer.  The Tuskegee Syphilis experiment, where Black men were infected with then allowed to suffer and die from Syphilis .  Finally, the use without consent of the cells of a Black woman named Henrietta Lacks to create a line of cells upon which numerous papers have been based.  This culture of cells is called HeLa.  For decades her cells were used without any consent of her or her family at all.

A fair-minded reader will see that there is lots of reason for otherwise reasonable educated Black people to be very warry of “official” information and want to see something deeper.  It is the reason why I was watching independent media, such as China Uncensored and ADV China.  Youtube channels which it turned out were right about this issue starting in China.

However, the 5G signals RFID conspiracy fails the smell test on so many counts.  First of all millimeter wave 5G signals have a wavelength too long for it to do anything to our biochemistry. It is not ionizing radiation.    Second, the idea that all of this is part of a conspiracy fails to consider that incompetent handling of exotic animals is way more likely.  That a researcher got infected maybe got sick then appeared to recover and spread it without realizing it or died and her remains infected the undertakers is in the realm of physical and biological possibility.

Nevertheless, this information spread around and wrecked destruction.   Authorities have lied too many times about medical experiments and major distrust has been sewn. 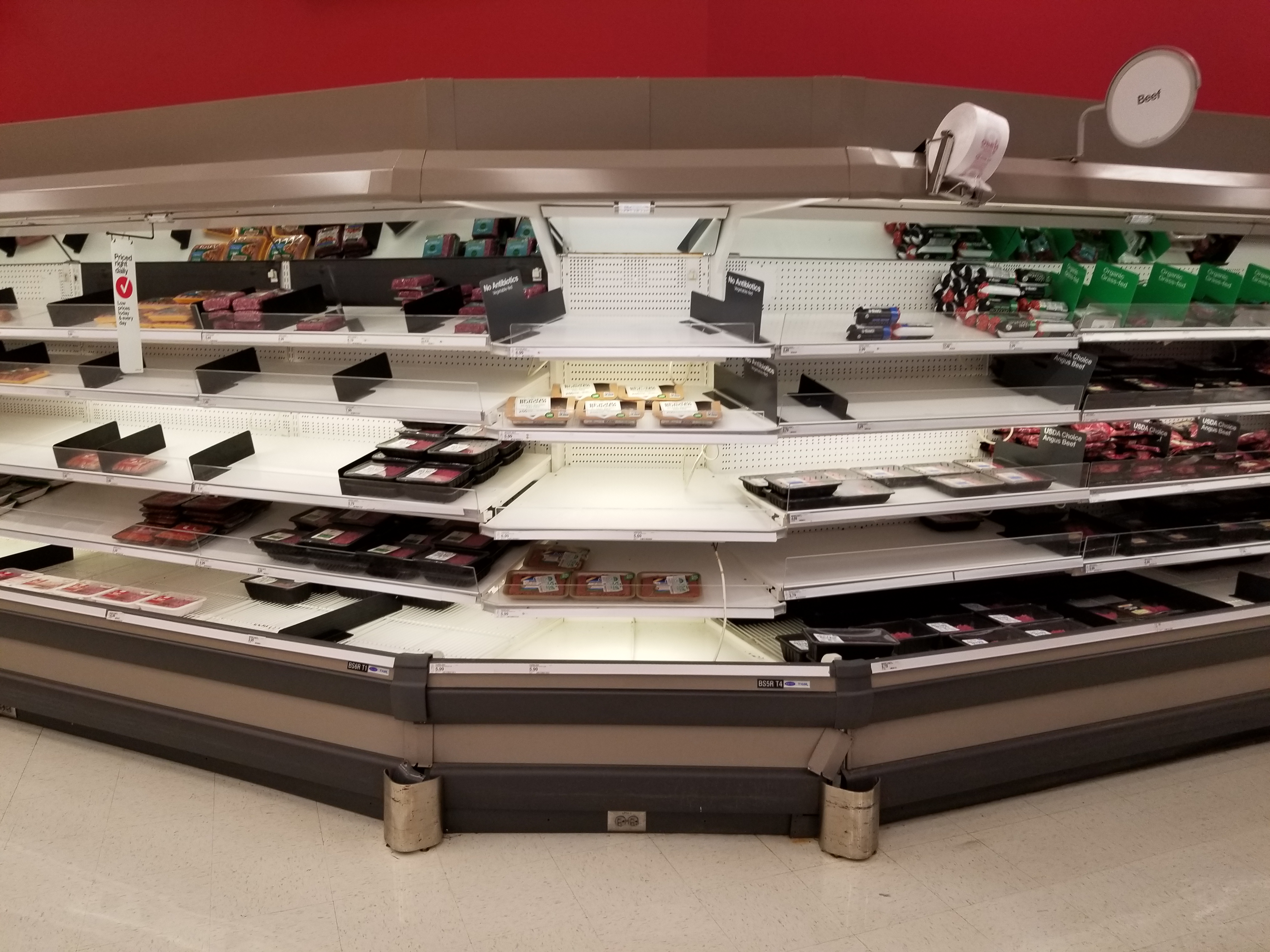 Not a single White person made any decision that lead Bellwood, IL to this place. Hundreds of years of structural racism and historical trauma which contributed to bad decision making did.

The situation of Bellwood,IL shows that this kind of issue is not simply reducible to perfidious racism and discrimination by any set of modern-day white people.   Race is a factor, racism is a factor through the historical traumas that still cause us Black, African American people, to sometimes shoot ourselves in the foot.

This may not be the case in Englewood neighborhood of Chicago.  There the issues of poverty are in full force.  On the other hand, the supposedly poorer relation of Bellwood, neighboring Maywood IL has far fewer case both per 100,000 and in absoloute numbers.  If race was a very important factor, and income where hugely controlling factors then Maywood would have more cases than Bellwood.