The Illinois Education Association is a state level component of the National Education Association. As one of the largest teachers unions in the country it may represent your college professors and your college teachers. The actions of unions in the past are why we have a 5 day work week, 8 hour work day, a lunch break, a minimum wage and a lot of other things we now take for granted.

See the update at the bottom of this page

That said, unions lately have started to overreach into blatant partisan politics externally and run their internal politics very poorly. Consider this image. CCCLOC is the City Colleges of Chicago Contingent Labor Organizing Committee, an IEA local the represents Adjunct Faculty, Adjunct Librarians, and vocational lecturers at City Colleges of Chicago. The top screen shot is the final result for a long awaited contract the bottom is the final result for the officers election. Click for full size. 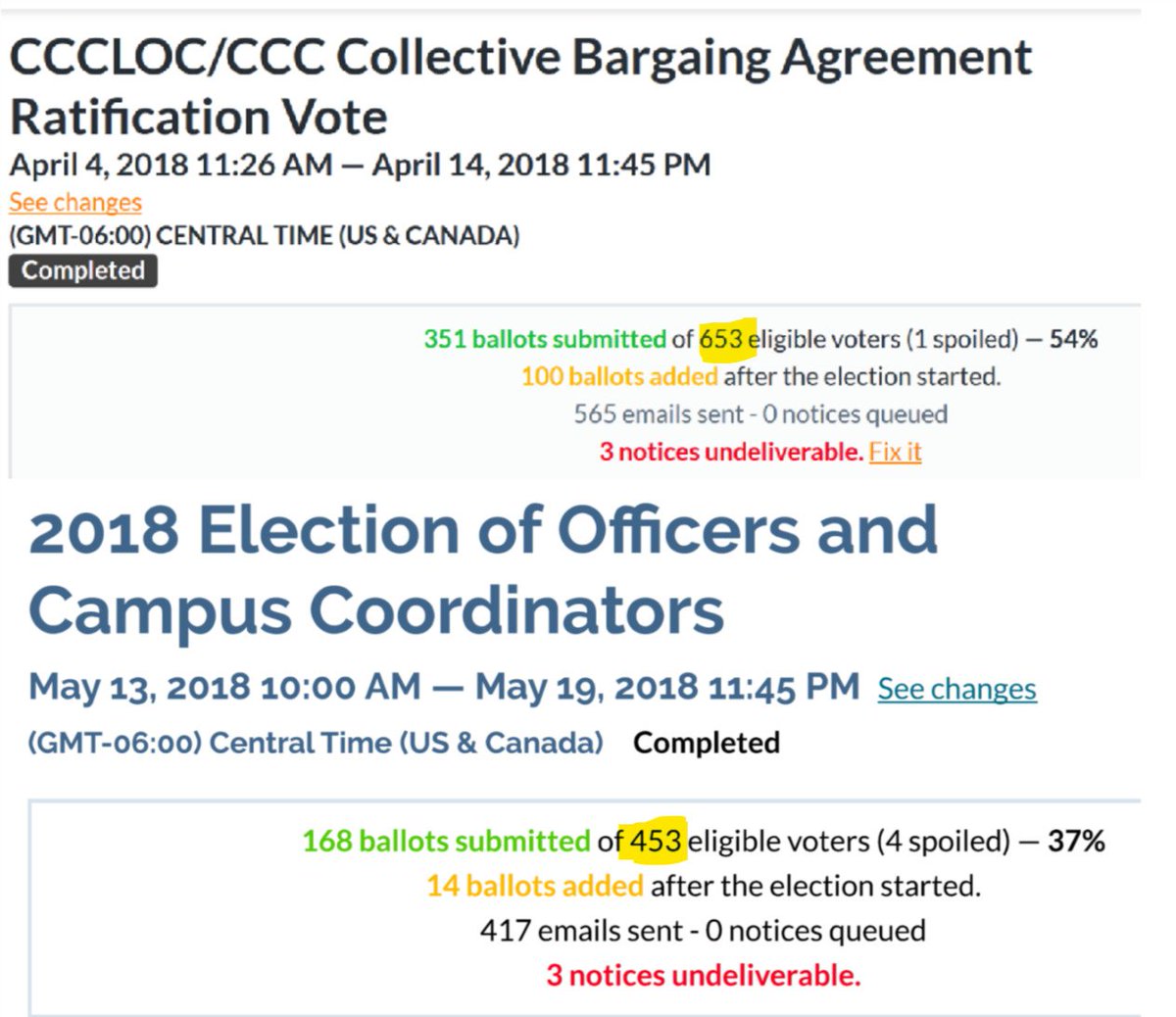 I did stand in this election and lost for treasurer but won campus representative. I'd be ok with that as I have been treasure and it is a lot of work and a lot of liability to deal with so much money. The BIG PROBLEM is that 200 of my fellow adjunct faculty did not get a chance to vote.

I believe in voting rights, I beleive that unions still have a real place in society protecting hard fought for rights. However, this kind of nonsense makes anti union, right to work politicians and others who are anti union look correct.

As treasurer I happen to know how much dues people have had to pay to it as an agency fee... about $115 without the right to vote. Another $15 per semester gets them int the local and the right to vote. They paid, they voted once, then they did not get to vote for their leadership. This is a travesty and I as an official and a citizen have a responsibility to make sure those peoples rights respected.

So myself and 8 others have filed complaints and are waiting for the official word from IEA in the form of their written decision on this matter. So far the local has had the integrity to hold that until all administrative appeals have been heard and dealt with or a new election is called the current officers will sit as care takers.

For the rest who see this is that if you seek a career as an academic scientist you may have to deal with being part of a union. You need to take stock of if that is worth it to you. Then keep an eye on what they do. You are the union. They represent you. In this post Janus decision world you do not have to give them your money...however you should if you like being able to take a coffee break and get paid above a slave wage. Ask an older adjunct what things were like before unionization for Adjuncts. That said, they can be ran in corrupt and sloppy ways. Keep a close eye on who is "in charge" and don't be afraid to speak up.

The IEA did not act to correct the big numerical and procedural problem with the election. 1/3 of the members not being polled. So this matter will be refereed to the proper state and national authorities.

In the meantime the Executive committee of the local, City Colleges Contingent Labor Organizing Committee voted in July to keep all officers in place in the offices they held until those appeals were settled. The list is as seen at the locals website.

The one who "won" the disputed election is trying to take office anyway and acting as if it would change the makeup of the executive committee. It turns out both the Acting president and I and the others all hold other offices in the local and the wider union that keep us on the ExComm.

SO...the Illinois Education Association has left us with a big mess to work through.

In any case CrunchyRoll and others must stop using "trap" as a translation for 男の娘 .

I haven't forgotten this issue. It seems like a small thing. But having some of our brightest young people.. the kind that consume foreign subtitled media taught a very cancerous form of transphobia is unacceptable. It is a mindset that leads to people like me being killed.
Quantum Gravity
More Articles All Articles
About