Basic physics can answer this question in a few different ways and it gives an insight into just how hard it will be to get the Ever Given out of the Canal.  First there is the question of how to quantify in scientific terms “hitting hard”.   This can be done with a number of distinctly different but related concepts, momentum (p), force (F) and kinetic energy (T).  Once we consider these numbers the task before the salvage crews can be understood at a very basic level.

UPDATE: On social media there is video which shows that the Ever Given appears to be unstuck and is floating.

The Evergreen lines Ever Given is a cargo container carrying ship that was traveling from Maylasia to the Netherlands. It has a weight of 200,000 tonnes.  It is owned by a company in Japan, managed by a company in  Germany, based in Taiwan, and was crewed entirely by Indian nationals as it navigated the Egyptian canal.  The normal operating velocity down the canal is about 8 knots.  The ship was experiencing high winds which were blowing across the canal.    This is important as though the ship does not have sails, of course, it did have many stories tall of cargo containers.

So the high winds imparted a velocity to the ship.  In order to keep straight on the canal the ship tried to navigate at 13 knots  so that the vector sum of the wind velocity and the forward velocity would add up to a safe velocity directed down the canal.  The thing about winds, however, is they are not so predictable and the ship ran aground at somewhere between 8 and 13 knots. 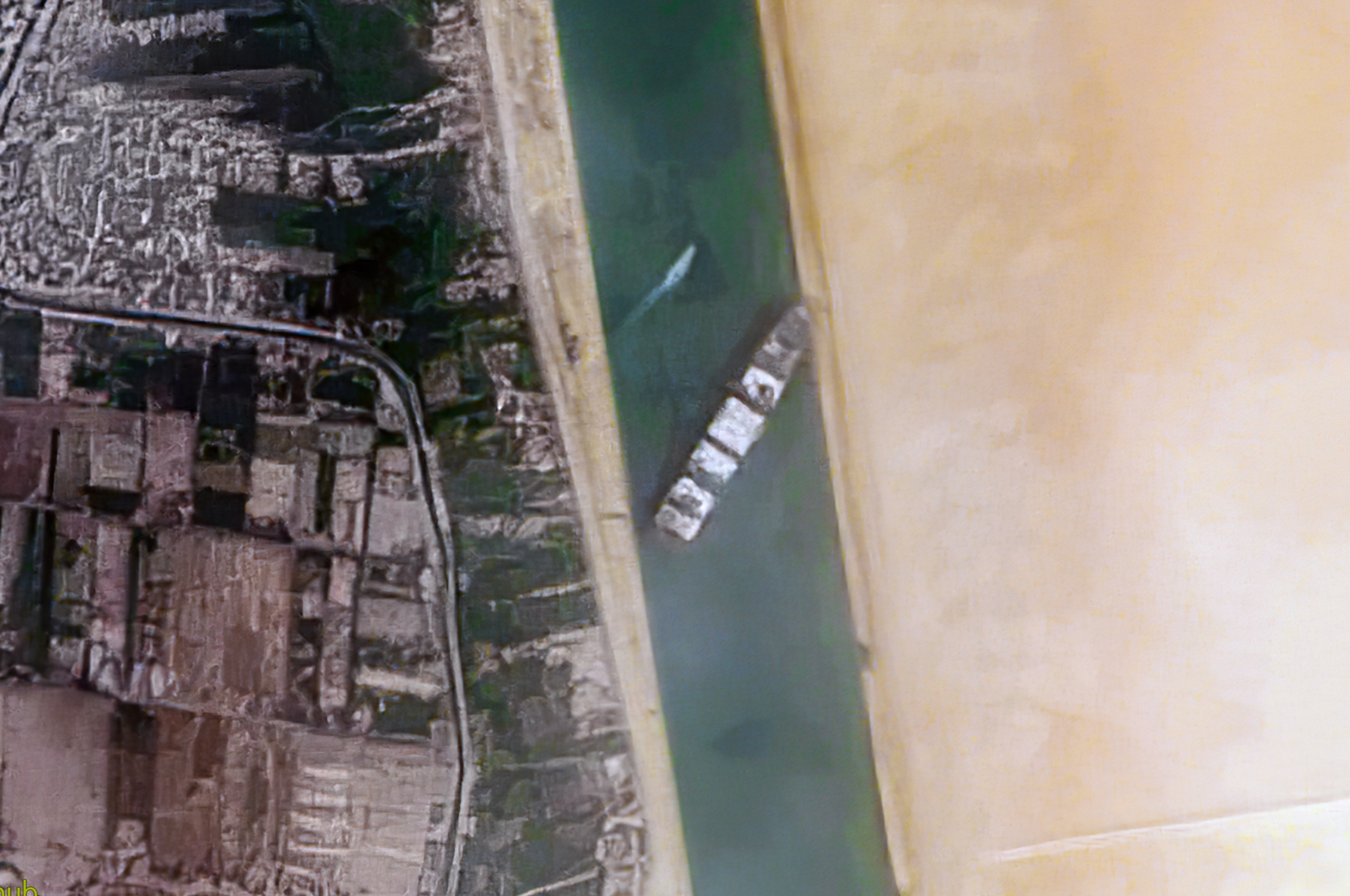 Lets look at the numbers and let them speak for themselves.

For the sake of our computation, we will ignore the direction of velocity.

Momentum, p , is mass times velocity.  P=mv.   Using Wolfram Alpha this gives a momentum of 1.029x10^9 kg m/s of momentum or about 11 times the momentum of a jumbo jet at cruising speed.

Force is the time rate of change of the momentum.  Suppose it took about 5 seconds for the ship to lose all momentum.  Again using Wolfram Alpha this gives a force of 2.058 x 10^8 N (Newtons).  This is about 17 times the thrust of a space shuttle solid rocket booster at liftoff, 900 times the thrust of a single engine on a boeing 747 or .36 times the total force, imparted by all of the photons from the Sun that are hitting the planet Earth.

The energy involved can be found by squaring the momentum and dividing by twice the mass. T=p^2/2m  (or ½ mv^2).  This gives an energy of 2.647 Giga Joules or 735.3 Kilo Watt hours.  For comparison this is 1.8 times the energy of an average lightning bolt or the equivalent of 0.63 tons of TNT.

It can be hard to fathom just how much force is involved in moving a ship the size of the Ever Given.  Hitting a continent with an energy equivalent to large bomb, but released over a longer period of time, it is amazing that the ship is in one piece.  Indeed, its forward section did sustain damage and is taking on a bit of water (Schuler, 2021).  They can pump it out fast enough for this not to be a problem as of right now.

All of that said to undo what was done by all that momentum, that much force, and that much energy will take at least as much. Indeed, it will take even more energy applied carefully and thoughtfully to not make the situation even worse.

They could unstick the ship tomorrow, but I wouldn’t bet on it.  Expect global supply chains to be even more disrupted than they are with the effect of making all sorts of commodities and finished goods more expensive.   If you are interested in hearing from someone who knows more about salvage than I ever will here is an interview from someone who salvaged the cruise ship Costa Concordia.

BREAKING : EVER GIVEN ship has been UNSTUCK & Moving into #Suez Canal after 6 Days!!

Egyptian crew managed to float it moments ago. It’s 5:42 am there: pic.twitter.com/GoMlYjQerL

I'm not a salvage expert but I do know physics. It looks to me like the two big beefy tugs in back were able to pull the stern back, as the ones in front pulled laterally once a critical mass of earth had been moved. Dozens of cubic meters of earth. pic.twitter.com/amwOzDJdPD

The Ever Given has been "freed." https://t.co/yECOVMTj04

It appears that the ship has been partially refloated.  It would be great if it was just refloated by now.  As stated above this will take a careful and considered application of great ammounts of force and energy.

Schuler, M. (2021, March 26). Ever Given Grounding: The Latest from the Ship Manager – Updated. (Gcaptain, Ed.) Retrieved from https://gcaptain.com/ever-given-grounding-the-latest-from-the-ship-manager/