Solar Eclipse Hold the Corona: Testing Einstein, and the Theories of Everything.
By Hontas Farmer | August 26th 2017 12:55 PM | Print | E-mail

Hontas Farmer
Arthur Eddington and others tried numerous times to test Einstein's general theory of relativity by photographing the stars which appear in the sky next to the eclipsed sun.  Einstein's theory predicted a particular change in their apparent position.  To the ability of anyone to measure this effect, all observations have been in accord with Einstein's theory.  My own work on and interest in theories of everything, both my own, and others, has as a fundamental assumption that Einsteins theory is exactly correct.  It probably is, however, no one gets a pass.  No matter who the scientist is we test their theories multiple times.
My own theory, that I have been developing and discussing here and at conferences and publishing on, takes as an axiom that general relativity is exact and at least as or more fundamental than quantum field theory.   Much more established, well known, and popular theories, like Loop Quantum Gravity, and String Theory take General relativity as the exact or almost exact in the low energy limit.

IF we can find any small deviation from Einstein's predictions then we will have made an interesting observation and need to explain it.

Gravitational microlensing by the Sun during an eclipse has only been observed with formally published results eight times.  This past Monday, down in Makanda IL, South of Carbondale and right on the center line of the "Great American Eclipse" I took almost two full minutes of QHD video.   I then used standard software to render out the frames to images, then stack the images and filter out the diffuse glare of the corona possibly revealing the background most of which would be invisible even during a total eclipse. 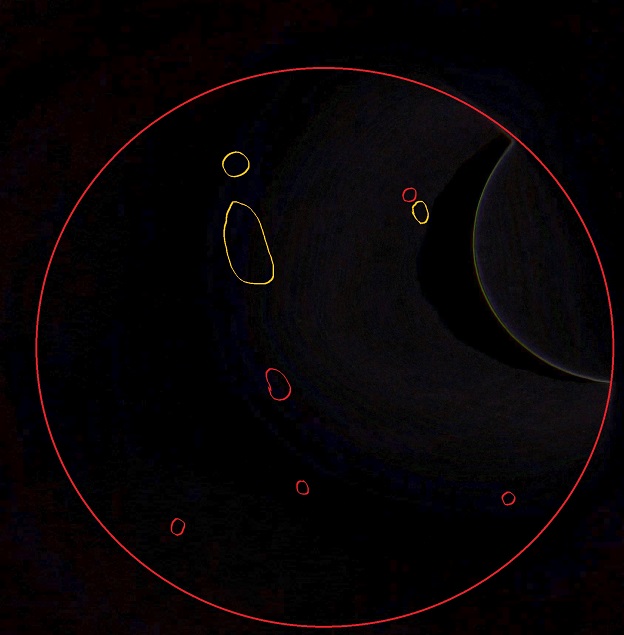 Caption - The red circle shows the approximate field of view of my 60mm refracting telescope. The small red circles show possible star locations I am somewhat sure of, the yellow circles are locations I am less sure of.  Those markings are not exhaustive or final.  For example, I'll want to reprocess the video into a stacked image and remove the corona by another independent means to check myself.  (Something that would/could be a good project for a student.)

The are still so dim that you won't see them in this low resolution image.  However you can see the outline of the eclipsed sun.  That's not drawn in at all.  You can also see a region where the intense corona cancels completely.  The algorithms I applied would cancel a diffuse source and preserve a point source like a distant star.

Unlike things like Nibiru or an imperial star destroyer we know stars are there, we know which stars should be visible in this frame.   It is only a matter of time before I have some sort of a result to report.  Perhaps I will have a cohort of highly motivated students in Astronomy class this semester who want to make projects out of various aspects of this research?

Theory is so much easier.

In the meantime while my observational efforts are underway I have had an experiment in public open authoring of a paper underway.  I posted a ROUGH manuscript of the next step in my theoretical efforts to Authorea and invited comments to be made there.   It has been three months and I have an updated less rough paper that I would like comments on .

One caveat. Comments on Authorea regarding this paper are what I need.  Comments on Science 20 about the paper are going to be largely ignored.  The reason I write this is because the whole point of their commenting system is for constructive comments and critiques to be posted with the paper, for the author to respond by posting improved version of the paper.

Be specific.  Comment next to the thing in the paper that you have an issue with.  If the issue with the paper is that it is not string theory well DUH contrary to some peoples thoughts that is not a flaw.  In fact given decades of brainpower and money spent on it compared to just me and very few others publishing along the same lines I am I think this idea deserves a full hearing. That said, many beautiful theories have failed with one observation.


The point of this form of publishing with public peer review throughout isn't to cut the paper to shreds and try to bury the idea but to strengthen the final result.  The paper, its versions, and the comments then exist as part of the permanent record.  This is similar to the dynamic in paper journals of a paper being published, then letters to the editor, and papers pointing out problems in a paper are published, then rebuttal papers are published and so on.


Hopefully if my theory is to fail, let me be the one to make the experimental observation that brings its down fall.

Currently I am an adjunct professor at the City Colleges of Chicago and the College of DuPage. My research focuses on astrophysics from massive...