A Theory of Everything has been the subject of many pages of journals and of much more ink spilled. Sean Carroll makes the point that at low energies, and within a domain of validity that applies to every day physics, we have such a theory already.  Everyday high energy physics, every day astrophysics and of course the physics of your daily life are all well understood.  A Theory of Everything would really be a theory about that singular event from which everything we can know of sprang, the big bang. Also good luck and godspeed to Jim Bridenstine, Lady Gaga inagurated the first Hunger Games Quarter Quell.  I will also expalin why scientists must be political while remaining true to objective scientific facts.

Sean Carroll is very careful to make it clear he is not claiming we have a theory that explains complex phenomena or that we are close to an underlying theory of everything  (Carroll, 2021).   There are many mathematically self-consistent models for such a theory.   However, that is not the subject here.

The claim is that we can write an equation which is an effective field theory, that in the realm of all the experiments where we can test it works just fine (Carroll, 2021). Michio Kaku described a final theory as being a “one inch equation”.  I formulated what I called a “three-inch equation” in an effort to unify known physics and the dark sector at high energy.  This equation that Carroll wrote down in his paper could be called a 10 inch equation.

It has a lot of terms.  Much of what is in it is determined experimentally and not from a unifying framework or set of postulates.   However, it has the virtue of being well tested and just working. Working from left to right the terms with g and R describe gravity via Einstein’s General Relativity.  Terms with A, F and psi with the Greek subscripts describe electroweak forces.  Phi describes the Higgs field Psi sub L and R describe the strong force.  The remaining terms describe the interactions.  Note that via g which is the metric, a mathematical object that describes the distance between points, gravity interacts with everything else.

If that sounds complicated that is because it is.  As this excellent talk by David Tong at the Royal Institution makes it clear not even physicist really understand all of this, even if we can mathematically manipulate it.

The equation above is known as a generating functional and contains what is known as an action.  From the action we can either derive field equations which when solved describe the physics of a given situation, or we can compute what are known as probability amplitudes.   We can through this equation tell you how stars shine, how black holes form, or how a microwave oven  works.  We can discuss possible future technologies, like the Alcubierre Warp Drive, or teleportation or quantum computing.

Here is the standard model of elementary Particles and Gravity in a graphical form.  This chart summarizes that equation. 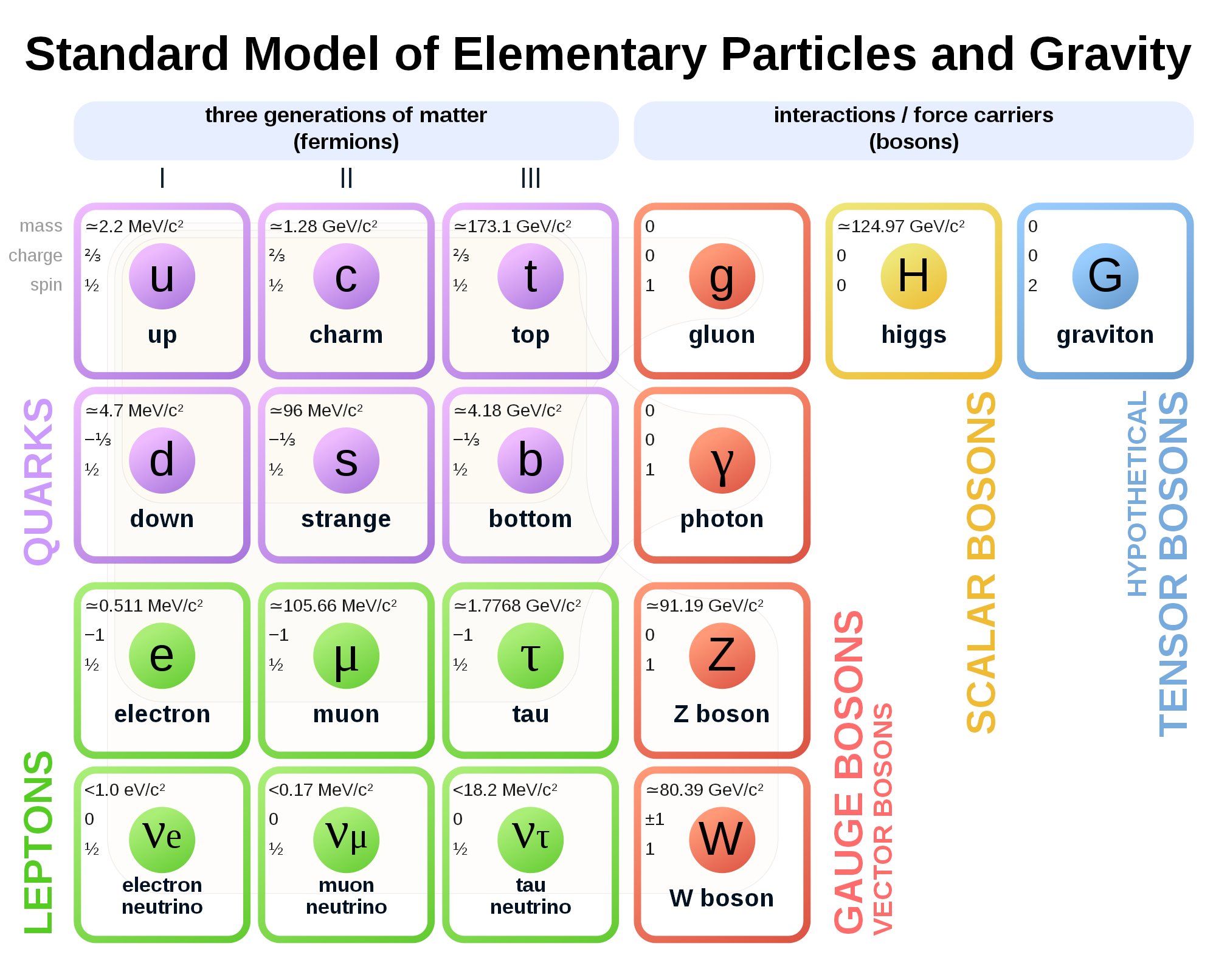 One area, near and dear to me, that Trump did good by was space science and space exploration.  Ignorant fools make fun of Trump initiatives in that area.  Not knowing all he did was keep what was good about Obama's approach and get rid of what was bad. One pick of his that worked out was his NASA administrator. Jim Bridenstine came not from science but was willing to learn.   He was willing to listen.  He set goals and supported his professionals in attaining those goals.  We were stuck kissing Boeing's butt for a new space vehicle and not letting SpaceX have a real chance.  Now we can fly to space from our soil.  Hopefully Biden admin will stay the course.

It has been my great honor to serve as your @NASA Administrator. I will miss the amazing NASA family and will forever be grateful for my time at this incredible agency. Ad astra. pic.twitter.com/Zba4MTawPV

That which was good will remain that which was bad will be reversed. The strength of our system is that we through this process do not stick with the idiosyncratic bad ideas, but we also wind up keeping the good ideas of the eccentric.  Frequency with which we change government is the genius of the United States of America.

All human actions are fundamentally undertaken by individuals, our greatest actions are taken by individuals acting in concert this is what we call politics.  Science, even on the scale of a single theoretical physicist, is a political act.  Without at least one other person to listen and act on a theory it is just daydreaming.

In this way there is a rigorous reason for scientist to care about the political situation and the state of the wider world.    So long as we never suborn factual truth to the expediencies of any man, in any party, in any country, in or out of power.  Never sell out your science for power, prestige, or popularity.

Remember, even 1000’s of years later, we remember Pythagoras, Imhotep, and Plato more than whatever kings they worked for.   How many who know the works of both Aristotle and his most famous pupil can name who that student was without looking it up? We are the philosophers, we are the dreamers.

Remember fellow scientists we have the power to influence the senators, presidents, and administrators only if we remain always and ever true.

On a Lighter Note.

Called it a week ago.

Am I the only one who thinks this all feels like something out of the Hunger Games? The average person is HURTING for money. https://t.co/aUxZwp56Lj #inaguration #BidenInauguration

Can't take anything from her singing ability.  I'd like to think the way Lady Gaga dressed, which she had to know would evoke the Hunger Games was a subtle comment on the state of the world.  We are all happy our country stands.  We are all happy everyone got their voice out, that the laws stood, that our system worked.  We wish Biden good luck.... but that doesn't mean everything is suddenly great.