Howard Minigh
Should we ban cars because of their potential to crash? Or stop selling painkillers in case someone takes too many? If we take the logic the EU applies to regulating pesticides, then the answer should be a resounding “yes”. Thankfully, EU lawmakers have looked at the weight of evidence and concluded the risk of driving cars and taking painkillers is acceptable – no ban needed.

Pesticides get different treatment though.

Take the class of insecticides so much in the news, neonicotinoids, that some have blamed for problems with bee health. Didn’t the European Union ban them claiming they were posing unacceptable risks to bees? Isn’t that case closed?

Well, no. The “case” is very much alive before the European Court of Justice (1) which recently heard oral arguments against the ban and is now deciding whether weight of evidence justifies the EU’s precipitous action which, by the way, the EU’s 28 Member States failed to back on two occasions, leaving the European Commission to act unilaterally. And other regulatory bodies -- such as the U.S. Environmental Protection Agency (EPA) and the Australian APVMA (2) -- are not following the European example, because as more evidence comes in it’s clear that bee health problems – and the role played by neonics -- aren’t as they were originally portrayed.

Neonics were an innovative breakthrough of the 1990s, bringing environmental benefits largely due to their use as a “seed-treatment,” or coating, around the seed. As the plant grows, this coating is taken up in the stems and leaves, where insects attack. Neonics are therefore highly targeted. But aren’t bees suffering? Pollinators are not only a critical part of our eco-system, they’re a vital part of our agricultural food-production system.

So let’s examine the facts.

First, there is no bee-pocalypse. Never was. Honeybee numbers have been rising since neonics came on the market. Since 1995, statistics from the United Nations Food and Agriculture Organisation show bee populations are up 10% in Europe, 8% in North America, 43% in South America, 43% in Asia, 19% in Africa. Globally it’s a 26% increase. (3) Just released statistics from the US Department of Agriculture (USDA) show that U.S. honeybee colonies reached a 22-year high in 2016. Yes, there are problems with bee health which must be addressed, but most authorities – including the European Commission, USDA (4) and most bee scientists – say the parasitic Varroa mite and disease are the primary causes affecting bee health. 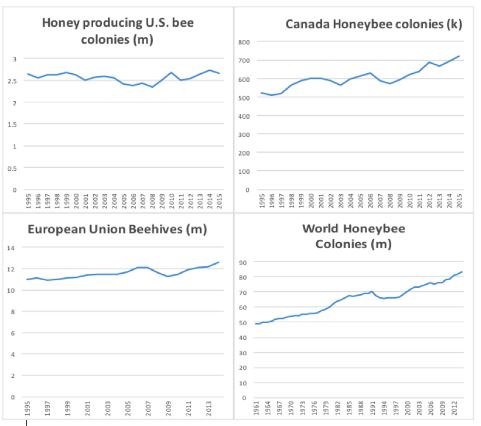 After those come adverse climatic conditions, lack of genetic diversity,(5) loss of foraging habitats,(6) and the stresses of transcontinental pollination services in regions with intensive managed pollination.(7)

Misuse of neonics can impact bee health and laboratory experiments that force-feed the insecticide to honeybees do find deleterious effects.8 But the EPA, which has taken this into consideration, determined that residue levels in seed-treated crops are far below harmful levels. (9 10 11 12)

Then there’s real-world experience. Honeybees love oilseed rape (OSR) and canola (13) which is almost universally treated with neonics in many countries. And honey bees thrive on it. According to the chief scientist of the APVMA,(14) the widespread transition by Australian farmers to canola has been accompanied by an explosion of honeybee populations there – some of which have gone wild and are so numerous they’ve become a pest to native wildlife. Meanwhile, in Europe, the EU ban has led to a cut in OSR cultivation, and cost farmers €510 million annually.(15)

As for truly wild bees – of which there are thousands of species -- there isn’t such good data. What we do know, however, points to many factors impacting their health. Health problems of bumblebees that have been shown in the U.S., for instance, are attributed to a Nosema disease imported by commercial greenhouse pollinators. Massive land use changes over the years, and climate change have affected others. Meanwhile, a major study found that wild bee declines reversed in England in the 1990s, coincident with the introduction of neonics onto the market.(16)

Bees are very important. That’s why the crop protection industry is working to improve communications between farmers and beekeepers, and why we’ve created programs to improve bee habitat and health. But if we want to do what’s right by these critical pollinators, we need to base regulation on real-world evidence.

Or, if we want to ban products based on their potential to cause harm, perhaps the EU should tackle cars and painkillers next?

Howard Minigh is the President & CEO of CropLife International....