Tweet
Lasers can do many things for us, from scanning barcodes at the grocery checkout to searching for life on the surface of Mars. And, according to chemists at Idaho National Laboratory, lasers might be able to help the nation respond in the case of a possible chemical or radiological attack.

Lasers, the INL scientists say, could play a big cleanup role. Lasers could help scrub chemical- or radiation-contaminated buildings clean, returning life to normal as safely and smoothly as possible.

"Lasers could be an important tool in our toolbox," says INL chemist Bob Fox.

Fox, INL’s 2009 Inventor of the Year, has been studying decontamination techniques for almost a decade. In the early 2000s, he joined a Department of Defense-led effort investigating how to remediate radiological incidents.

Fixing the damage would require decontaminating any buildings, roads and other infrastructure that soaked up radioactive atoms (known as radionuclides). Doing this quickly and effectively would be vital, minimizing disruptions to people’s lives and the American economy.

In theory, chemists already know how to clean up radiological contaminants. They can "chelate" affected areas, for instance, using grabby, reactive chemicals to wrench radionuclides off surfaces. But in the real world, that’s easier said than done. Many building materials — like cement and brick — are extremely porous.

Water inhabits those cracks and pores, too, and that’s where lasers come in. Fox, Groenewold and their colleagues have shown that laser pulses can flash that water into steam, carrying the contaminants back to the surface for removal by chelation or other means.

In the last few years, the INL team has extended its work to chemical-weapon decontamination, another high national-defense priority. Nerve agents like sarin, VX and sulfur mustard are extremely dangerous, and cleaning them up can be difficult, costly and time-consuming. Most preferred methods employ other chemicals — bleach solutions, for example — which must themselves be dealt with.

"Using bleach creates a lot of secondary waste, which you have to collect and dispose of," Groenewold says. "And bleach is quite chemically aggressive, meaning it may well damage the structures you’re trying to decontaminate."

Again, lasers show promise as a possible remediation upgrade. In a series of tests still under way at the U.S. Army’s Aberdeen Proving Ground, the INL team has been using ultraviolet-wavelength lasers to scrub surfaces of sulfur mustard and VX. The tests have been successful so far, even on complex, porous surfaces like concrete. 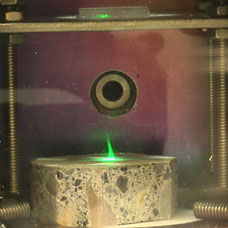 Laser light plays across a piece of cement spiked with chemical agent, creating a green "flame" of vapors and surface plasma.  Credit: INL

The power of light

Lasers can degrade weapons like VX in two ways: photochemically or photothermally. In photochemical decomposition, high-energy laser photons blast apart chemical bonds, slicing the agent into pieces. In photothermal decomposition, photons heat up the target surface enough to speed along natural degradation reactions. In some cases, the intense heat by itself can cause contaminant molecules to fall apart.

Some chemical agents are susceptible photochemically, others photothermally. Knowing how chemical contaminants fall apart is key, because some of their degradation products can themselves be hazardous. But according to Fox, the tests look good in this regard, too.

"The lasers are showing neutralization of agent without generation of dangerous byproducts," he says.

Even if they’re not used to degrade VX or other agents, lasers could still be helpful in cleanup scenarios. Laser light could blast nasty chemicals off a wall, for example, and an integrated vacuum system could suck them up. 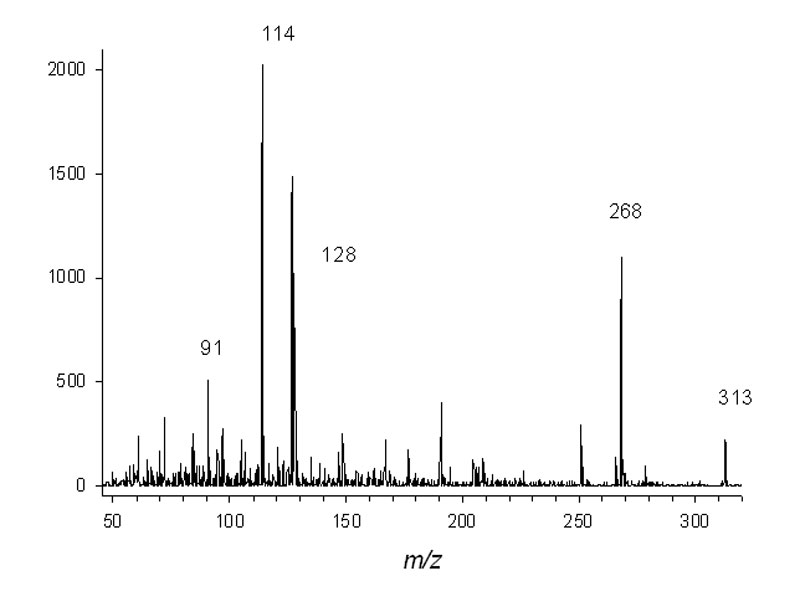 The porous nature of structural materials complicates chemical decontamination perhaps more than it does radiological cleanup. That’s because chemicals can soak deeper in —beyond the reach of laser steam-cleaning — then seep out over time after the surface has been cleansed. But the INL team thinks it can overcome this difficulty, too. The answer: heat.

Focusing microwaves on a point behind pooled contaminant, Fox says, could create heat radiation that drives the chemical back out to the surface. The technology to do this is already available, since industry uses microwaves to cure concrete. The INL researchers will look at the effectiveness of this technique in future experiments.

Using lasers to decontaminate buildings and other infrastructure may sound futuristic. But in researching ways to strengthen our response to potential incidents, Fox and his team are adapting established laser technology. Lasers have been used in cleanup capacities for more than a decade. Dentists employ them, for example, to kill periodontal bacteria and quash mouth infections. Doctors use them to remove tattoos. And lasers have recently become a common way to restore precious artwork.

Laser technology can also scale up to perform large-scale decontamination jobs. Some cleanup and restoration firms, such as adapt laser system, are already using lasers to scrub soot off building facades. Further, these industrial operations often use automated lasers, demonstrating that laser work can be done remotely. This would minimize risks to remediation personnel responding to a terrorist attack.

Fox stresses that laser decontamination is a tool in the proof-of-principle stage, not a panacea. But this tool shows great promise, and Fox is happy to keep testing out its usefulness.

"I’m willing to shine my laser at anything," he says.

Acknowledgement: Idaho National Laboratory received part of its funding for this research from the U.S. Department of Homeland Security, Directorate for Science and Technology, Chemical and Biological Division. Work has been performed by Battelle Energy Alliance under the U.S. Department of Energy contract DE-AC07-05ID14517.
Idaho National Laboratory
More Articles All Articles
About

Mike Wall is a science writer for the Idaho National Laboratory. He has been both a science journalist and a scientist, with research interests in...