Samuel Kenyon
Information itself is a foundational concept for cognitive science theories.

But the very definition of information can also cause issues, especially when the term is used to describe the brain "encoding" information from the senses without any regard for types of information and levels of abstraction.

Some philosophers are concerned with information that has meaning (although really everybody should be concerned...) and the nature of "content." Prof. of Philosophical Psychology Daniel D. Hutto posted an article recently on memory [1]. He points out the entrenched metaphor of memories as items archived in storehouses in our minds and the dangers of not realizing the metaphor. 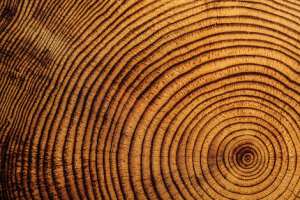 Information as covariance is one of the most basic ways to define information itself philosophically. Naturally occurring information, and presumably artificial information, is at least covariance. I.e., information is the relationship between two arbitrary states which change together always (or at least fairly reliably).

What is content as philosophers use the term? I've mentioned the issue with that term before; here we will pretend it means representations. It's common and easy to describe thoughts as built out of representations of things, be they real or imaginary, since those things are not actually inside a person's brain, and to the best of our knowledge there is not some ethereal linkage between a real object and a thought of that object (although it makes for exciting fiction to build a world in which any story written by a character creates a new universe where that fantasy is real).

I think content is built off of covariance. And what we often think of as "remembering" and "recall" are abstractions resting on several lower layers. 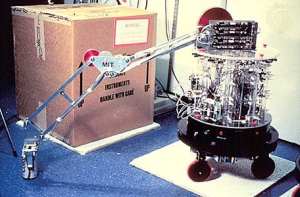 Herbert, a robot by Jonathan Connell, a student of Rod Brooks

I think if Rod Brooks [2] and company (Connell, Flynn, Angle and others) had continued their research in certain directions they might have actually achieved layered mental architectures with learning capabilities, either by design and/or emergence. And they would have emergent internal behavior that could be referred to as "memory," and not like memory in a computer but like memory in an animal.

Memory in a system grown from reflexive subsystems is not just a module dropped in--it is in the nature of the system. And if that unspecific nature makes it difficult to use the term "memory" than so be it. Maybe memory should be abandoned for this kind of project since the word recalls "storage" and a host of computational baggage which is very achievable in computers (indeed, at many levels of abstraction) but misleading for making bio-inspired embodied situated creatures.

Hutto claims that contentful information is not in a mind--it requires connections to external things [1]:

Yet arguably, the contents in question are not recovered from the archives of individual minds rather they are actively constructed as a means of relating and making claims about past happenings. Again, arguably, the ability is not stem purely from our being creatures who have biologically inherited machinery for perceiving and storing informational contents, rather this is a special competence that that comes only through mastery of specific kinds of discursive practices.

As that quote introduces, Hutto furthermore suggests that human narrative abilities, e.g. telling stories, may be part of our developmental program to achieve contentful information. If that's true then it means my ability to pull up memories is somehow derived from childhood learning of communicating historic and fictional narratives to other humans.

Regardless of whether narrative competence is required, we can certainly explore many ways in which a computational architecture can expand from pre-programmed reflexes to conditioned responses to full-blown human level semantic memories. It could mean there are different kinds of mechanisms scaffolded on top of each other, as well as scaffolded on externally available interactions, and/or scaffolded on new abstractions such as semantic or pre-semantic symbols composed of essentially basic reflexes and conditioning.

What We Really Want from a Robot with Memory

A requirements approach could break down "memory" into what behaviors one wants a robot to be capable of regardless of how it is done.

A first stab at a couple parts of such a decomposition might be:
In number 2, I mean remembering and recalling "pieces of information." For example, the seemingly simple act of Human A remembering a name involves many stages of informational coding and translation. Later the recollection of the name involves a host of various computations in which the contexts trigger patterns at various levels of abstraction, resulting in conscious content as well as motor actions such as marking (or speaking) a series of symbols (e.g. letters of the alphabet) that triggers in Human B a fuzzy cloud of patterns that is close enough to the "same" name. Human B would say that Human A "remembered a name." Or if the human produced the wrong marks, or no marks at all, we might say that the human "forgot a name" or perhaps "never learned it in the first place."