[Update 11/7/2016: Visually, fast drops in a time series, like those of D140 and D260, will tend to appear to squash any noise and periodicity. For that reason, analysis of presence of periodicity needs to be mathematical.]

One day it will be clear that the ~0.88-day periodicity of Boyajian's star (which you might know as KIC 8462852) was key to solving one of the most challenging data problems ever encountered. Today I want to focus on one aspect of that periodicity: When it is there and when it is not.

The landmark "WTF" paper (Boyajian et al. 2016) introduced the finding of a 0.88-day periodicity based on spectral analysis of the star's light curve. The periodicity was explained as an effect of star rotation, due to starspots or "chemically peculiar regions." Makarov and Goldin (2016) challenged that interpretation on a number of points: (1) The star's centroid in Kepler's CCD also wobbles with the same periodicity, in a way that is more pronounced than expected, (2) a cycle's flux curve is sharp-crested at the bottom, rather than flat, and (3) the phase of the periodic feature is stable over long periods of time.

In various sections of the light curve, it's possible to get a good sense of what the 0.88-day periodicity looks like. Let's take a look at days 400 to 420. 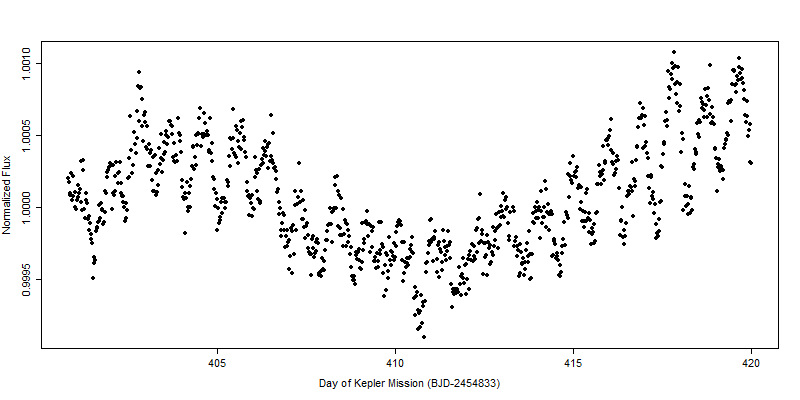 It's a peculiar pattern, but I'll leave discussion of what might cause it for some other occasion. The pattern repeats throughout the Kepler mission, mostly.

Some of the large dips in the light curve of Boyajian's star are exceptionally smooth, particularly D792. That is a well known peculiarity of the dips. But because some of those dips are exceedingly large, and much of the dimming lasts less than a day, it might be assumed that the 0.88-day periodicity is obscured by them.

For that reason, I would first like to take a look at dips that are not so large. For example, this is D140, early in the Kepler mission: 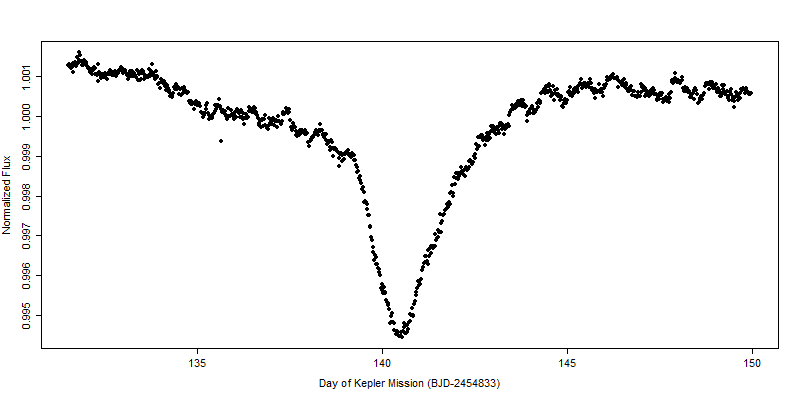 D140 is the 4th largest dip, but the scaling is adequate for our purposes. The 0.88-day periodicity appears to be missing for nearly 5 days around D140.

Next, let's take a look at D260, where we see more of the same loss of periodicity: 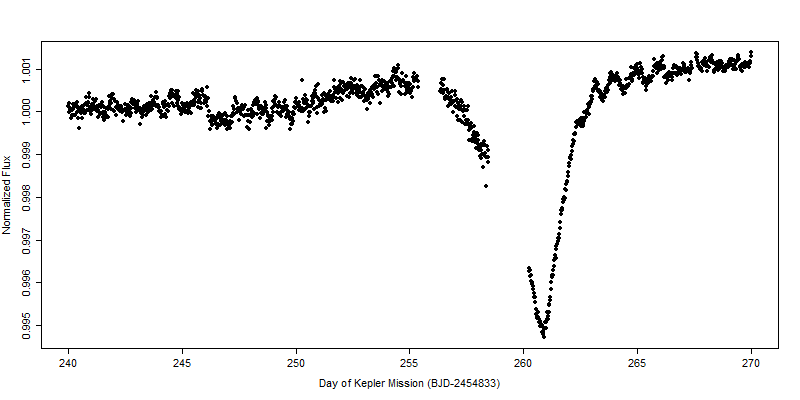 There is a family of relatively small dips that is particularly interesting, because of a peculiarly symmetric feature. Here is D1205: 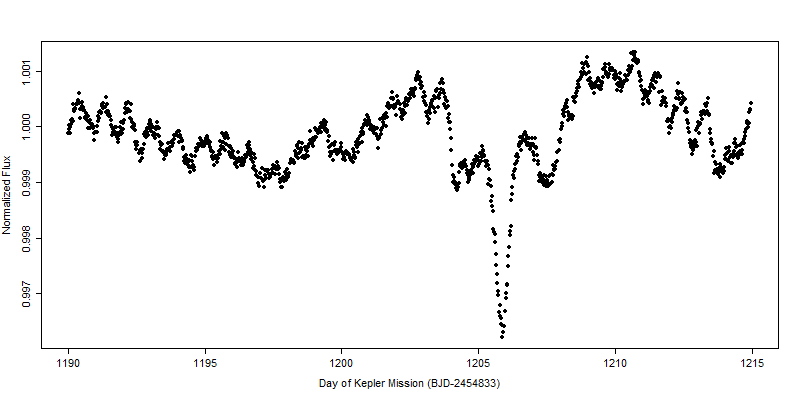 It's almost as if D1205 temporarily amplifies the 0.88-day periodicity, except for one thing: The interval between the main dip and its flanking dips is twice as long as expected.

A much larger but similar dip can be found in D1540. In that case, the smaller flanking dips are separated from the main dip by an interval that is approximately 3 times 0.88 days. 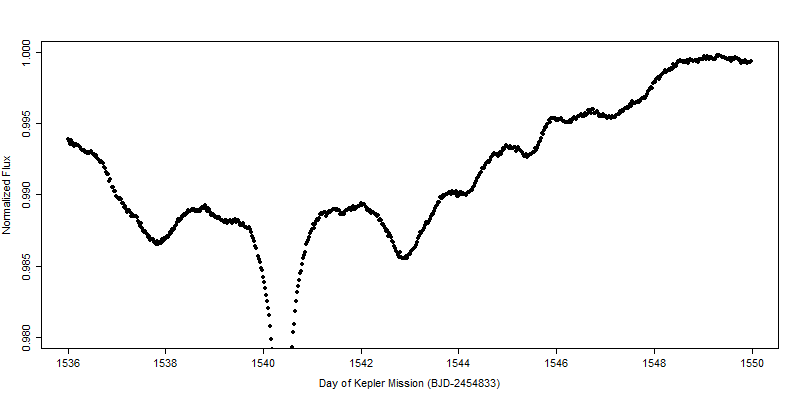 Let's now take a look at the second largest and perhaps the most peculiar dip in the light curve: D792. To get a sense of the periodicity, I'm only going to show part of the dip's ingress, before the flux drops more than 0.4%. 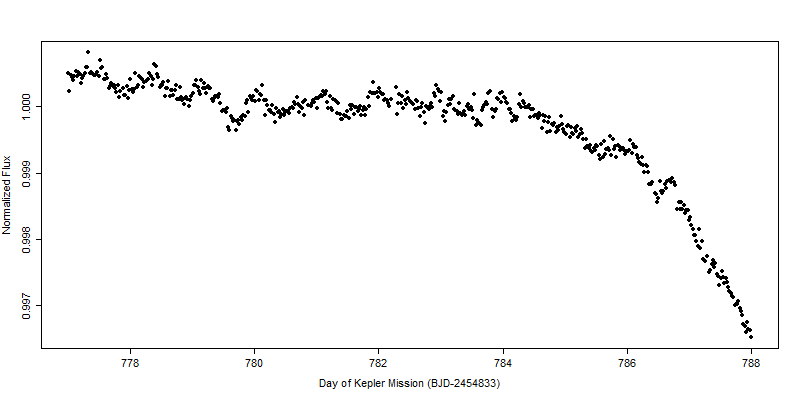 Loss of periodicity seems to start at about day 784 and is complete shortly after day 786.

During egress, we see a gradual recovery of the periodicity. 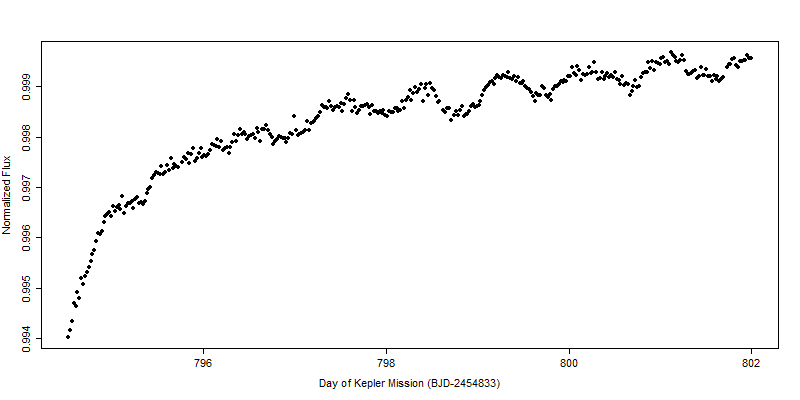 Finally, let's take a look at ingress for the biggest dip, D1519, starting a couple weeks before it reaches its peak. 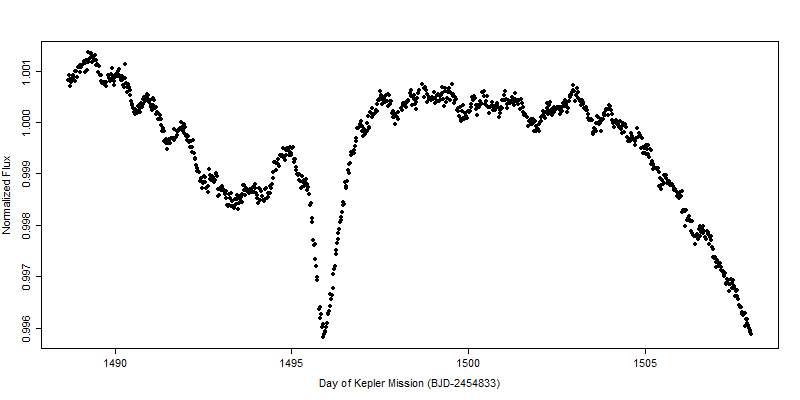 Let's look at how this loss of periodicity might be explained under different hypothesis frameworks.

Someone with access to pre-release Kepler data or the Kepler software introduced bogus data at certain points and this data was missing the 0.88-day periodicity.

Problems: It would be an incredibly elaborate hoax, involving careful modification of pixel-level observations without substantially altering the star's centroid, etc. Additionally, there's reason to believe the hoaxer would've had to have known about the 0.88-day periodicity a priori, while simultaneously forgetting to include it. An elaborate hoax lasting about 7 years, with no claims of responsibility, seems exceedingly unlikely.

Pixel level errors are considered unlikely because many of these anomalies are observed across Kepler seasons, which means Boyajian's star was observed in different pixel sets at different times because of rotation of Kepler's solar array every 3 months. Other types of errors might be considered, such as errors in the software that processes and generates the data.

Problems: These errors would have to occur across multiple pixels (multiple rows and columns) in a consistent and synchronized manner. As we saw, the "errors" would have to be synchronized with the 0.88-day periodicity at times. No "errors" that resemble those of Boyajian's star are observed anywhere else in the Kepler data.

It's possible to imagine multiple ways in which an alien civilization inhabiting Boyajian's star might explain the loss of periodicity. For example, perhaps the peculiar 0.88-day period is produced by a ring-shaped structure in orbit around the star, which serves as a skeleton of an ongoing construction project. At intervals of 0.88 days, the skeleton contains some markers, which are later used as locations where construction modules concentrate. Indeed, we saw that smaller companion dips often occur at intervals of bigger dips that are multiples of ~ 0.88 days. There is an even more interesting relationship between major dips, but that requires more elaboration to explain.

Problems: An alien-civilization hypothesis runs the risk of becoming an "alien of the gaps" answer to any problems that arise, under the assumption that aliens can do anything they want. No infrared? They are efficient. Too much infrared? They are building things that emit heat. It's unclear how a ring-like structure in orbit might produce the centroid wobble observed by Makarov and Goldin, but a possible answer is that the aliens inhabit or have colonized one of the companion stars posited.

The star rotates on its axis every 0.88 days, and starspots cause the observed periodicity.

Problems:  Makarov and Goldin explained the problems with this hypothesis. Additionally, even if large dips might obscure the starspots (or are caused by starspots), we saw that loss of periodicity starts long before there's any substantial loss in brightness and is recovered long after the bulk of the dimming has subsided.

Problems: Again, we see that the loss of periodicity occurs long before any substantial loss in brightness. Plus we still have the problem of explaining what is blocking the companion's light in the manner we observe. The light curve of Boyajian's star is nothing like that of eclipsing binaries, not in the periodicity pattern, and not in the shape of flux dips.

Problems: Beyond what has been written elsewhere about intrinsic variability in this type of star, occurrence of large dips does not appear to be random. Any natural explanation for those dips will likely involve some sort of elaborate orbit resonance pattern.
I'll end with an observation and a suggestion for future research: If a space telescope with similar or better resolution than Kepler were to observe the 0.88-day pattern of Boyajian's star in both visible light and infrared, we might find that the pattern is caused by transits rather than intrinsic variability or something like an eclipsing binary. Since a normal transit can't possibly produce a light curve with that kind of sharp zig-zag pattern, we would be forced to conclude we're looking at a megastructure.


In Depth Analytics
More Articles All Articles
About