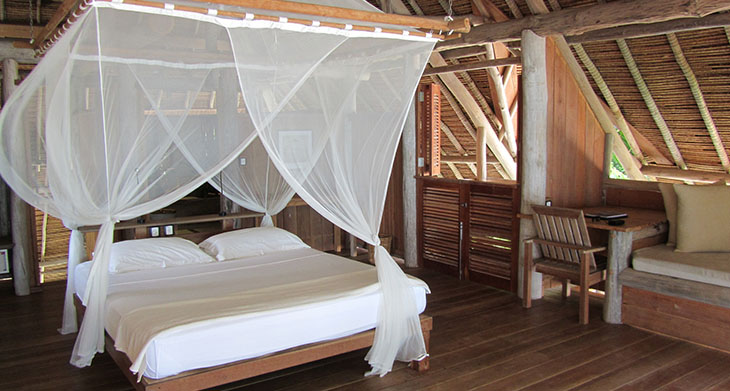 By Joel N. Shurkin, Inside Science

(Inside Science) - In nature — the rule goes — everything is connected to everything else, so it is possible that when you combine two methods of preventing a deadly disease, bad things can happen.

A team of researchers, working with a computer model found that could be true in the fight against malaria, one of humankind's greatest scourges. Combining anti-mosquito netting with a certain type of potential vaccine for the disease, they found, could lead to more illness and deaths. They published the results in January in the Proceedings of the National Academy of Sciences.

Malaria is caused by a parasite hosted by Anopheles mosquitoes in the tropics. It is a maddening disease for scientists. It represents one of the deadliest of all maladies, killing more than half a million people a year, mostly African children. Yet research and practical preventions have brought it achingly close to control and perhaps eradication. The use of bed nets to keep the insects away and sometimes to kill them seems to work, as do sprayed insecticides. Currently, there are more than 20 vaccines being tested, although none are so far licensed.

The deadliest form of the parasite is a species called Plasmodium falciparum. Because it is a parasite, the usual rules of infection from viruses and bacteria don't apply, said Yael Artzy-Randrup, now an assistant professor of theoretical ecology at the University of Amsterdam in the Netherlands, and the lead author of the paper. The work was done when she was a post-doctoral fellow at the University of Michigan in Ann Arbor.

The most effective weapon for eliminating malaria from an area is to wipe out the mosquitoes in that area, breaking the cycle of transmission. That approach is difficult bordering on the impossible in some parts of the world. The next most effective is the use of treated bed nets. The nets usually contain insect repellent and insecticide, so they both kill and repel, she said.

Killing the mosquitoes is more effective than just repelling them, she explained.

There are three main kinds of vaccines in development, each attacking a different stage of the parasites' life cycle.

One, pre-erythrocytic vaccines, or PEVs, reduce the chances of getting infected. Blood-stage vaccines, or BSVs, modulate the infection to lessen the blow of the disease and spare lives in the process. The third form, transmission-blocking vaccines, or TBVs do nothing for the infected patient but prevent the mosquitoes from spreading the disease to someone else after biting an infected person.

Although BSV or PEV are more attractive because they protect hosts from becoming ill, the model found that using bed nets and BSV or PEV vaccines could actually increase the number of cases morbidity and mortality, especially among older people.

The reason has to do with the kind of immunity people get from malarial infections.

For instance, an infection from a virus such as measles can provide life-long immunity, assuming the patient survives the disease. Vaccines can provide life-long immunity without the patient having to risk infection, although, in some diseases such as measles, it requires more than one shot. Any malaria vaccine would require a lifetime of shots, roughly every other year.

People can get malaria multiple times during their life. The immunity you get from one infection may not last more than a year or two.

"You can become repeatedly infected throughout life, and you can have multiple infections, what's known as a super infection," Artzy-Randrup said. "You don't get total immunity."

If a person survives the first case of malaria, additional bites from infected mosquitoes will provide some level of natural immunity.

There is what is called a "herd immunity" with malaria as there is with other infectious diseases—the percentage of people in a population who have to be immune from a disease for it to disappear, but no one knows what that is with malaria, she said. People who don't immunize their children for diseases like measles are relying on herd immunity to protect them. However, the more people who go unimmunized, the less likely herd immunity will provide protection.

The researchers, including Mercedes Pascual of Michigan and Andrew Dobson of Princeton University, found that treated bed nets and TBV vaccines would be most effective. But, both BSV and PEV malaria vaccines combined with bed nets made things worse, increasing malaria cases and reducing the levels of natural immunity in the population. Immunity is transient, complex, and not complete. Thus far the vaccines have not been shown to prevent infection.

Finding the best combination of bed nets and vaccine types is not an immediate issue, according to Clive Shiff, an associate professor of molecular biology and immunology at Johns Hopkins' Malaria Research Institute, because none of the developing vaccines seem close to being fully effective.
"The nature of immunizing people who have been exposed to malaria has not shown to be successful because they have not prevented the infection with the vaccine. The issue has not been properly addressed in the literature. I have concern all together that the problem is more difficult than people assume."

He said the best weapon is the use of insecticide indoors. The mosquitoes rest on the wall of the house and are killed by the insecticide.

There are, however, good drugs for malaria if a person becomes infected--where they are available.

"There is no reason to die of malaria," he said.

Joel Shurkin is a freelance writer based in Baltimore. He is the author of nine books on science and the history of science, and has taught science journalism at Stanford University, UC Santa Cruz and the University of Alaska Fairbanks. He tweets at @shurkin. Reprinted with permission from Inside Science, an editorially independent news product of the American Institute of Physics, a nonprofit organization dedicated to advancing, promoting and serving the physical sciences.Top image: David Jones, CC-BY