John M. Collins
Forensic science does not prove guilt or innocence. It never has and it never will.

The next time you hear about DNA evidence, for example, proving the guilt or innocence of a suspect in a violent crime, rest assured that you are being misinformed. In courts of law, attorneys do the proving, not science.

Science, after all, has no real value until a human being can use it to solve a problem or answer a question of importance. People prove things; science provides help. Yes, science may exist to provide some clarity in support of or in contradiction to an argument, but science itself does not make arguments.

This is one of many themes I sought to address in my new book, Crime Lab Report (Academic Press, 2019). In it, I discuss how the credibility of forensic science is deflated by the partisan, adversarial nature of our criminal justice system in its current form. 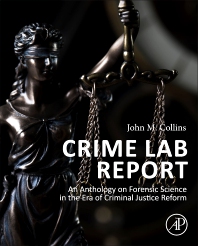 Criminal justice is a high-stakes, high-pressure affair. And it goes without saying that the effort to determine if a defendant did or did not commit a crime is of the utmost seriousness.

But over the last 15 to 20 years, we have witnessed science being stretched like a rubber band between opposing parties in criminal litigation. Each party puts it own spin on what science is and what it has to offer.

If you don't like it, attack it. If you like it, sing its praises. Then just leave it up to a jury of laypersons to figure it all out.

Among the best examples of this science-stretching was the trial of O.J. Simpson in 1995. But the problem exists in many kinds of cases, whether we hear about them or not.

Having testified as an expert witness over 100 times in criminal trials, almost all of which were related to violent crimes, I can't tell you often I dreamed of being able to work directly with a judge or her/his court to make sure my expert opinion was both understood and subjected to a reasonable degree of scrutiny. Instead, like all expert witnesses working in the United States, I had no choice but to be "on a side," which gives the unmistakable appearance of partiality.

In his 2004 book, Laws of Men and Laws of Nature, Tal Golan writes about the common-law use of expert witnesses, noting how experts were traditionally seen as consultants to the court, not to the parties in dispute.

It was quickly realized how valuable expert witnesses could be to the disputants themselves, affording them the opportunity to leverage their own subject matter experts in the crafting of arguments. Eventually, this became the system we now have today in the United States.

As I wrote in Crime Lab Report:

"It seems unreasonable to expect anyone in our justice system to have a high level of confidence in the impartiality and objectivity of expert witnesses. Expert witnesses are largely forced into partisan servitude in an adversarial system that confers upon them great responsibilities without affording them a reasonable degree of control over the environment in which they are expected to meet those responsibilities."

Forcing expert witnesses to be mouthpieces for warring lawyers prevents courts from enjoying the full benefits of expert testimony. It also harms our courts' ability to fish out charlatans when they appear.

By rethinking how expert testimony can be presented in court and returning the services of expert witnesses back to the courts themselves, we can create the conditions in which science can thrive as a tool in the determination of guilt or innocence.

Until that day comes, expert witnesses will continue to "play for a team," or, at least, be seen as such. If we deflate the credibility of expert witnesses by forcing them to play in a rigged system, we shouldn't be surprised by jurors, litigators, or journalists who suspect the science being presented must be rigged as well.
High-Stakes Leadership
More Articles All Articles
About