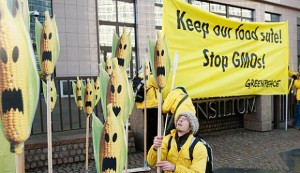 Greenpeace is set to launch a series of attacks against crop biotechnology this week. It has scheduled a news conference for Friday titled “Ecological Agriculture, A Climate Resilient Model of Agriculture: The Way Forward,” which purportedly makes  its case against vitamin-enhanced Golden Rice.

According to the Greenpeace news release, the panel of speakers will address what it calls “Ecological Agriculture,” which Greenpeace says is a model of farming better adapted to deal with climate change. Dr. Janet Cotter, a Greenpeace geologist, will lead a parade of speakers including activist groups from the Philippines and Thailand and a farmer’s testimonial experience and opposition to GMOs.

The anti-GMO advocacy groups claims that GMOs have been an expensive failure, citing among other examples vitamin-enhanced Golden Rice, which has been slow to develop and gain approval–in part because of protests by Greenpeace and other campaigning groups.

Greenpeace has upped its offensive against Golden Rice this year, claiming it is a Trojan horse to soften the public opposition to GMOs that Greenpeace itself has helped create.

“Those promoting ‘Golden’ rice in the UK and elsewhere appear to be doing so more as means of promoting the wider GM agenda–and attacking opponents of the ‘GM project’ –than as serious means of solving problems in the global south,” Greenpeace wrote on its website this summer.

And they entirely miss what are for us the main issues in the debate. First, problems of malnutrition are best addressed in their totality, not by a relentless focus on a single nutrient out of the hundreds essential for good health.

‘Golden’ rice is far from being a sustainable solution to vitamin deficiency – it encourages a diet based solely on rice. In Greenpeace’s opinion, the tens of millions of dollars invested in the development and promotion of GM ‘Golden’ rice would have been better spent in supporting solutions that work.

Ecologically farmed home and community gardens can contribute to healthy and varied diets by directly empowering people to produce their own nutritious food. This is the real long-lasting solution Vitamin A Deficeincy VAD) affected communities need.

Oddly, Greenpeace is also expected to announce it’s support for a version of genetic modification that it claims is uniquely different from crop genetic engineering - Marker Assisted Selection (MAS).

“Whilst the debate between GM and non-GM has used up most of the political oxygen, this report shows it is not the only–or indeed, the best–show in town. There is a growing range of non-GM biotechnologies which show how a growing world population can be fed at a time when natural environments are increasingly stressed,” Greenpeace chief scientist Dr Doug Parr told the Guardian in anticipation of the Friday press conference.

Some scientists called the claims by Greenpeace “bizarre” and “hypocritical.” There is not much different between MAS and GE, they say.

“What they are talking about is essentially the suite of technologies that spearhead the ‘green revolution’, which eco groups such as Greenpeace have steadfastly rubbished for decades. Now they see it as agriculture’s saviour,” said Johnjoe McFadden, professor of molecular genetics at the University of Surrey.

“If GM is not up to much then why has it been so successful that crops such as soya are now nearly all GM worldwide. Who knows best how to grow their own crop –farmers or Greenpeace?”

Greenpeace has been running a disinformation campaign against Golden Rice and GMOs for years. In 2012, the Asian arm of Greenpeace issued an alarming press release headlined: “24 children used as guinea pigs in genetically engineered ‘Golden Rice’ trial.”

“Big business hustling in of one the world’s most sacred things: our food supply,” Greenpeace warned in the release. The Philippines, it said, was the next ‘target.’

So-called Golden Rice—the genetically modified, vitamin A-enhanced version of white rice—has been in development for more than a decade. It is a dramatic improvement over the world’s most popular staple. In 1999, Swiss and German scientists used “open source” technology to develop Golden Rice, the first major genetically enhanced food in the new generation of bio-engineered grains, fruits, and vegetables that consumers actually eat directly.

The new rice variety was produced by splicing two genes (one from the daffodil, which gives the rice its golden color, and one from a bacterium that helps the process along) into white rice so it produces beta-carotene, which the body can convert to Vitamin A. Newer varieties have been tweaked to add iron, and to help the body more readily absorb the iron already in white rice.

According to the United Nations, more than half the world is vitamin deficient. White rice represents 72 percent of the diet for the people of Bangladesh and nearly as much in Laos and Indonesia; more than 40 percent in the Philippines, Madagascar and Sierra Leone; around 40 percent in Guyana and Suriname. Although white rice is a filling food and can be grown in abundance, it has a major drawback: it lacks Vitamin

Vitamin A deficiency (VAD) weakens the immune system, increasing the risk of infections such as measles and malaria. Severe deficiencies can lead to corneal ulcers or blindness. It especially targets children and pregnant women. The World Health Organization notes there are more than 100 million VAD children around the world. Some 250,000 to 500,000 of these children become blind every year, with 50 percent of them dying. In Asia and Africa, nearly 600,000 vitamin A-deficient women die from childbirth-related causes.

The Bill and Melinda Gates Foundation has taken a lead role in collaboration with the International Rice Research Institute in the Philippines, to bring Golden Rice to market. Helen Keller International, a leading global health organization that reduces blindness and prevents malnutrition worldwide, joined the Golden Rice project to further develop and evaluate Golden Rice

Greenpeace and like-minded groups argue that tinkering with the genome of food or crops will unleash a genetic Godzilla that threatens the future of mankind. This is not hyperbole. They claim that Trojan-horse genes not subject to checks and balances in nature could be “released” into the environment causing untold havoc, and could physically harm children.

“Food insecurity is brought about by lack of enough land, by decreasing rice production and decreasing incomes,” said one Golden Rice opponent. “Only through a genuine land reform which ensures farmers’ access to sufficient rice and other food sources will farmers start to become healthy again.”

Greenpeace is campaigning vigorously to block Golden Rice trials throughout Southeast Asia, instead promoting vitamin pills, organic gardening and political empowerment rather than readily available food—which of course does little for children going to bed hungry and malnourished each night.

Jon Entine, executive director of the Genetic Literacy Project, is a Senior Fellow at the World Food Center, Institute for Food and Agricultural Literacy, University of California-Davis. Follow @JonEntine on Twitter. Genetic Literacy Project is a non-partisan, non-profit organization that explores the intersection of DNA research, media and policy to disentangle science from ideology and this article was originally published there. Read the original article here.