Jose Solorzano
Until recently, we hadn't observed brightening of Boyajian's Star (KIC 8462852) over time. There were documented instances of fading over time, some more convincing than others. It was as though the star is gradually fading until the day it finally disappears from view.


Simon et al. (2017) changed all of that. Using ASAS/ASAS-SN data, the researchers documented two apparent episodes of brightening in the last 11 years. It now seems Boyajian's Star has long-term variability that is likely periodic.

Since the apparent amplitude of the long-term magnitude signal is not small, it's reasonable to expect it should show up in century-long data, despite the noisy nature of this data. I have confirmed this expectation with simulations.

I'm making the source code that I used in this analysis available on GitHub.

I will be using light curve data from the DASCH Kepler Input Catalog (g-band). I removed only one data point from it  — the biggest outlier — as it improves cross-validation.

I added Sonneberg Observatory data provided by Michael Hippke on GitHub. I'm using the stata_output_pg.csv file. In this case, I'm removing 2σ outliers, as that seems to improve the model in cross-validation.

I am not using data from the DASCH APASS Input Catalog (B-band), even though it has a couple thousand data points. It not only reduces model performance in cross-validation, but it seems to have different statistically significant periodicity, which should be studied separately.

I found one period (7.29 years) that has a statistically significant peak in a Lomb-Scargle periodogram. In addition to this, a sinusoidal model that also includes periods of 4.12, 5.46, 8.19 and 10.90 years exhibits improved performance in cross-validation.

Let's take a look at the Lomb-Scargle (LS) periodogram of the data. An LS periodogram is designed to deal with the problem of non-uniform distribution of observation timestamps. 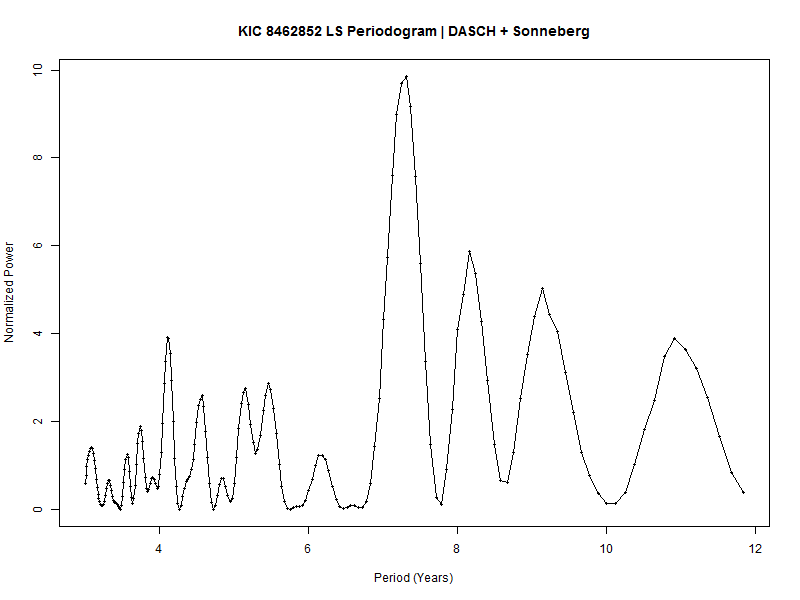 One thing no periodogram can prevent is the presence of bogus peaks due to noise. In simulations with similarly noisy synthetic data, it's clear that while real peaks are prominently visible, bogus peaks also show up. In our periodogram of century-long data, we should expect that some of the peaks we see are bogus. The peak at 7.29 years is significant, and I will discuss statistical significance shortly.

In order to select other peaks that are likely predictive, I averaged 50 10-fold cross-validation runs of models that combine multiple periods. Cross-validation is a technique used in Machine Learning to evaluate a model with data that wasn't used in training ("out of bag" data) but still use all existing data to evaluate the model. The technique is often applied in variable selection, and that's essentially what I used it for.

Cross-validation doesn't guarantee a selected model/variable is significant or reflective of the Ground Truth, but it's more likely than not that a model which performs well in cross-validation will also generalize well.

I generated 500 simulated series of synthetic data that contain noise similar to that found in century-long data. No signals were added to the simulated series. I then checked the distribution of the maximum peak of LS periodograms equivalent to the one I produced with actual data. Normalized power above ~ 7.2 is found in about 5% of simulations. Thus, 7.2 is a good approximate threshold for standard statistical significance. When normalized power is greater than 9, we can talk about statistical significance with over 99% confidence.


There's a major problem with this idea, however: Those families don't have very many asteroids. Most asteroids avoid those resonances with Jupiter. These mostly asteroid-free zones are called Kirkwood Gaps.

Despite this considerably difficulty, it seems reasonable to conclude the most massive element of the outer stellar system (a Jupiter analog) inhabits an orbit of 10.90 years, and there's an additional reason why I say that.

Why a major dip period of 4.31 years still makes sense


If major dips like D1519, D1540 and D1568 are caused by transits in an orbit that doesn't include a lot of other material, they wouldn't be expected to show up in a periodogram of noisy century-long data, or even in folded data. This assertion is testable.

The system configuration I just proposed is consistent with the data we analyzed, the way our own solar system is configured, and independent observations of major dips. That said, let me outline the problems I see with it:

Under an Extraterrestrial Intelligence (ETI) hypothesis, these problems seem resolvable in a manner that is not very contrived.

First, asteroid mining is an activity you would expect any nascent spacefaring civilization to engage in. It's a relatively easy way to obtain abundant mineral resources, and our own civilization is contemplating it. There are countless papers on this. Perhaps there's a reason why dust resulting from asteroid mining would distribute in orbits corresponding to Kirkwood Gaps.

The transits that produce major dips seem large, but an analysis of the light curves suggests they are mostly diffuse. They are likely not opaque objects. They could be swarms of relatively small objects. In any case, materials used to build space modules and tie them together would need to have a very high tensile strength to weight ratio. It would not be surprising if "megastructures" are not gravitationally dominant in a system.

We find one statistically significant periodogram peak in century-long data of Boyajian's star, at a period of 7.29 years. Additional periods that improve model performance in cross-validation (more likely to be predictive than not) are 4.12, 5.46, 8.19, and 10.90 years. If we use the period of 10.90 years as a reference (a Jupiter analog) we find resonances of 8:3, 2:1, 3:2, and 4:3, which are reminiscent of resonances observed in our own solar system, except in mostly asteroid-free Kirkwood Gaps in the main asteroid belt. Additionally, we find that a period of 4.31 years for major dips would have a 5:2 resonance (1.1% error) with our proposed Jupiter analog. The unusual and large transits that produce major dips would have to be located in the inner stellar system, perhaps at the edge of the asteroid belt, in an orbit with semi-major axis of 2.98 AU. Because major dips are unique and the long-term variability is unique, we suggest both phenomena must have a common underlying mechanism, despite largely occurring in different orbits.