The Global Warming "Hiatus" Was Always Statistical Nonsense, But Now the Talking Point is in Hiatus
By Jose Solorzano | January 27th 2017 10:45 AM | Print | E-mail

Jose Solorzano
A lot has been said about the so-called "hiatus" in Global Warming starting in 1998, a major El Niño year. Perhaps the best illustration of the problem with the talking point is an animation titled "The Escalator", over at skepticalscience.com.

There's a more fundamental issue with it, however, than failing to recognize the difference between short-term weather fluctuations and long-term climate change. The talking point is based on faulty reasoning about trend analysis and burden of proof, as I intend to argue.

Let me illustrate this point with an example. If I want to show that the temperature trend in the last 40 years is anomalous, I would estimate the trend and its confidence interval. I would then note that, with 95% confidence, a non-flat 40-year trend exists. Afterwards, let's say I notice that the trend in the last 3 years is below zero. Is that sufficient to say warming has stopped in the last 3 years? In a literal sense, yes, but it tells us virtually nothing about the behavior of Earth's climate. Statistically, 3 years are not enough to reject the long-term trend. Even if we were to look at a longer time frame like 15 years, our ability to reject the long-term trend is limited. Suppose we find the 15-year trend is 0.05 ± 1.5 °C/century. At best, we can say that the trend is no greater than 1.55 °C/century, which is by no means a rejection of global warming.

The next time you hear someone say Global Warming has stopped, ask them for the confidence interval of the trend. (They typically don't provide one, and when they do, it's calculated in a naive way.) Then explain that they can, at most, reject the upper bound of the confidence interval. No claims beyond that are sound, given prior knowledge. 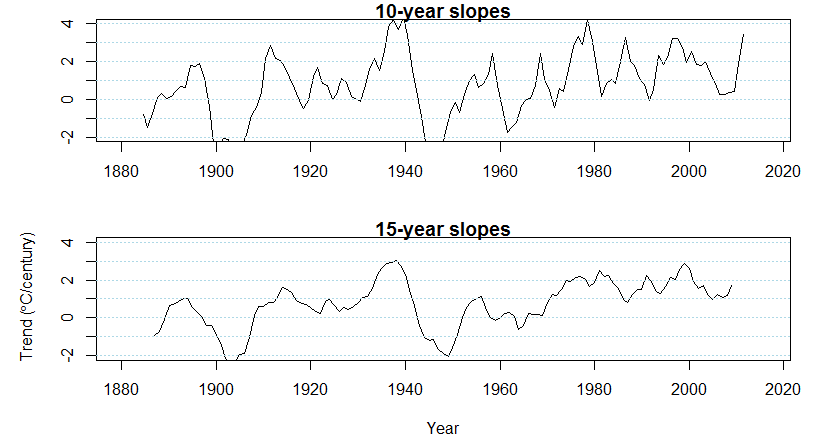 It's clear that after 1970 there were four occasions when the 10-year trend was nearly zero. The pattern is pseudo-periodic, so we can expect it will be repeated a decade or so from now. The next time this occurs we will hopefully have the benefit of hindsight.

More stability can be observed in the 15-year trend, but if you cherry-pick an El Niño year as the starting point (like record-breaking 2016), that can help extend the apparently flat trend several years. It's almost certainly the case that the next few years will be colder than 2016, which might result in other, more rudimentary, talking points.

The last two years were tough for the "hiatus" in any case, and it will be a while before the talking point can make a comeback, if it can at all.