Kevin M. Folta
If you want to scare somebody, convince them that there is a remote chance of danger in their food, water or medicine. Even if there is no evidence to back up the claim, people respond strongly to such information, causing them to abandon safe foods for alternatives. Today this fear factor is being played to influence food policy and politics, as activists realize they can change consumption with distortions of truth and perpetuation of food phobias and food anxiety. Because it works like a charm.

In the Summer of 1976 concerned customers flocked to grocery stores to return poisonous provisions. They heard of the dangers on television, from friends and from activists. The rumors swirled. Alleged tragedies unfolded. Mikey from the LIFE cereal box died from eating them. They also killed Spanky McFarland. They invented disco.

It was the country’s bicentennial and the public psyche irrefutably connected red M&Ms to cancer. Moms picked them out of Halloween candy stashes and whole bags of candy were burned in effigy. At the same time Bubble yum was filled with spider eggs and Rod Stewart was getting his stomach pumped. Nightly.

Lousy science at the root

The hysteria over red M&Ms was spawned by some suggestive Soviet science that was accepted by Joe Six Pack as medical gospel. The foundational Russian 1971 report showed evidence that a red food dye, FD&C No.2, was linked to cancer. Follow up by the FDA could not demonstrate evidence of harm at physiologically relevant levels.

But a 70’s Amish Internet of barbers, beauticians and talking heads on all four television channels codified the association. The news linking red M&Ms to cancer ignited a culture into freak out mode. The Mars Candy Company bowed to public pressure, removing red M&Ms from the package. A country breathed a collective “Up Your Nose with a Rubber Hose” and all was okay with the world once the cancer candies were gone.

Time would show that red M&Ms were simply candy and not cancer capsules. In fact, they didn’t even use FD&C No.2 as a food dye, but instead used FD&C No.40! The hysteria was not scientifically supported and the chemical causing the hysteria was not even used in the shunned product. The simple rumor sent us into a non-scientific tailspin. To this day FD&C No.2 is still used in Canada and Europe, where in 2010 it was declared harmless by the European Food and Safety Authority.

Melts in Your Mouth, Not in Your Memory

This account of red M&Ms is presented as a reminder of how non-scientific rumors and misunderstanding of science can twist cultural perceptions of a perfectly safe food. To this day you can Google “red M&Ms” and find warnings about eating them, consuming them during pregnancy, or inserting them rectally. Talk about red dye No.2! Myth, non-scientific thinking, and society’s implied labeling of a safe product as dangerous still causes many to not play Russian (science) roulette with M&Ms. At least the red ones. The same credulous souls know the green ones are Poor Man’s Viagra. 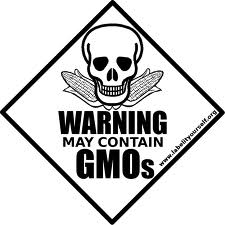 Slash cut to 2012 and we again see a non-scientific assault on harmless food. A handful of reports in low-impact journals are influencing the public consensus on the dangers of transgenic (a.k.a. Genetically Modified, or GMO) foods.

Lacking proper controls, statistically meaningful numbers and/or physiologically relevant experiments, these reports are held as high evidence that 70% of the food supply is absolute poison, evidenced by the fact that 100% of people consuming it eventually die.

Like the red M&M, transgenic foods have a demonstrated record of safety and no plausible way to cause the alleged problems. Corporations, scientists and activists provide active surveillance, as any real evidence of harm would turn America’s food supply upside down overnight. The scientists identifying such an association would be forever lauded as saviors of the food supply.

But there are no such data.

Just Label It, With a Bull’s-eye

With no evidence of harm, there is a groundswell of support for labeling foods containing transgenic products. Some of those initiating such efforts might tell you that it is about consumer understanding of food products. However, many among them will tell you that this is about food politics and trying to deal a blow to Big Ag- a handful of companies that supply the seeds and chemicals to produce mass agronomic crops like corn, sugar beets, canola and cotton. If they can label it, they can then scare the pants off of anyone that might choose to eat it using non-scientific information and bad science.

To me, the label is not a problem if it provides honest information. The problem is that the label will be the basis to build fear, making safe food the new Red M&Ms. The label will become a tool for those with political or anti-corporate motivations to develop fear about food.

I know that this posting is more projection and opinion than scientific evidence. However, it is important to at least consider that this agenda may be at the core of labeling intentions. History shows us that people respond negatively and with great memory to threats from food. Based on a single (bad) report in 1940 people were convinced that ice cream caused polio, a fear that rippled across America. Many people won’t eat at Jack-in-the-Box (I guess I never would either, but not because of E.coli fear), buy Tollhouse Cookie Dough or even risk eating sprouts. They fear ALAR in apples, mercury in seafood and acrylamide in their freedom fries. Unfounded fear of food is real and hard to reverse.

The labels on food will ultimately have to be factual and won’t contain the skull-n-crossbones and warnings that activists would like to see. But even a factual label may be used as a means to install fear of a sound technology, leading consumers to change their buying habits. We don’t tolerate it when a company makes unreal claims about their products. We don’t allow labels to stay something that is not true. Yet here we are contemplating a label that will be used to manipulate the consumer, not based on science, but based on fear.
Kevin Folta
More Articles All Articles
About