Perhaps Age Matters More Than Genetics In Risk Of Illness As We Get Older
By Maya Chowdhury | September 10th 2021 04:01 AM | Print | E-mail

How powerful are the genes that make up our bodies? The Minnesota Center for Twin and Family Research notes that as many as half of our traits may be inherited from our genes. Additionally, those double-helix DNA strands are responsible for all the proteins that are necessary for life. However, the is a limit to how essential understanding one's genetics is for a human being.

A recent paper published in the journal PLOS Genetics suggests that as individuals get older, they may be more susceptible to illness because of their age, not their genetic makeup.

A Rollercoaster of Genetics

From the time we're conceived, genetics plays a part in what characteristics we have. From hair and eye color to something as weird as whether we can roll our tongues, genetics plays a significant role in who we are as individuals. The earliest understanding of genetics didn't even have the term. However, if it weren't for those early hunter-gatherers that realized breeding certain species together made for more edible plants, we'd never have progressed as a civilization. The modern terminology of genetics came from the grandfather of the field, Gregor Mendel. According to the National Human Genome Research Institute, Mendelian Genetics refers to the inheritance of species' characteristics that engage in sexual reproduction. However, along with the positives come the negatives. 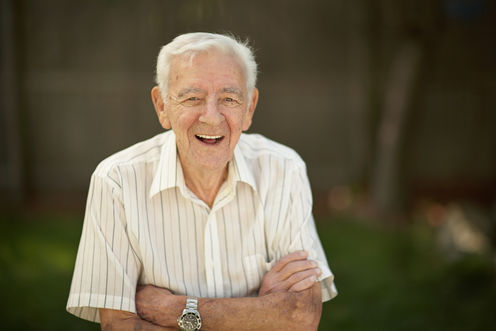 Diseases Passed Down to New Generations

What we know of genes allows us to spot patterns in how individuals behave or how they get sick. In fact, research has shown that genetic disorders even existed in primates further back in the hominid tree. These congenital disabilities could potentially be life-threatening, as in the case of hemophilia or "bleeding disease." However, they may also lead to positive genetic traits, such as sickle-cell anemia being prevalent in societies where malaria is also a threat. The malarial protist cannot live in or utilize the sickle-cell blood vessels making the entire disease a non-starter in those areas where there are many sickle-celled individuals. Unfortunately, that same individual probably could not scale a mountain because they would die from lack of oxygen due to their sickle cell state.

Genetic diseases are quite prevalent as they are scary, but aging can be just as terrible. As a person's body ages, the connective tissues and ligaments start to break down and fail. Bones begin to get brittle as they stop taking in the same volumes of calcium to shore up their structural integrity. Brain cells start dying in ever-increasing numbers leading to dementia and Alzheimer's disease. Some diseases manifest later in life that may show some signs of occurring if one studies the family tree of an individual. Genetic markers allow doctors to determine the chance a person will develop a specific illness in their old age. But getting sick as one gets older might not actually be due to these hidden genetic hints. They might be more prevalent because of the aging process itself.

The paper in PLOS Genetics notes that there is a distinct difference between the chance someone will get ill from a genetic disorder and the chance they'd get sick from other factors. The paper looked at a database that included over half a million NHS patients from the United Kingdom Biobank. Taking the details from these individuals and exploring their current illnesses, and comparing it to their genetic profiles, it was seen that the risk for certain genetic diseases tended to decrease over time. However, these patients would still get ill, thanks to the expected effects of increased age. The paper concluded that genetics do indeed play a part in determining whether a person is likely to have a genetic defect early on in life, but that effectiveness decreases with age.

It's a widely held idea that a person's lifespan is directly linked to their genetic makeup. Knowing how long a person's predecessors lived is a good yardstick for the life expectancy of others of that lineage. A person's lifespan may therefore be linked to their genetics. Research into the topic has shown that specific segments of DNA occurring towards the end of a person's chromosomes (known as telomeres) may actually affect the age to which a person may live. Cells within our bodies multiply by splitting. When the cells do this, the DNA at the center of its nucleus copies itself, leaving half the original DNA in the copy and copying the other strand. Unfortunately, each time a cell divides, the telomeres get shorter. As a cell gets older, it can no longer divide without losing essential pieces of DNA.

Research into aging has yet to determine what causes the process precisely, but the telomere theory is a start. Human beings have the potential to live much longer lives if scientists manage to work out the secret of aging and potentially how to reverse it. The secret to changing or stopping aging altogether lies within the cell's genetics. For now, aging cells still lead to severe problems as an individual gets older. Modern medicine has managed to replace most of the complex machinery within the body with artificial alternatives. Still, even so, a person will eventually die when the irreplaceable parts wear down. Genetics may predict that person's risk factor for certain illnesses, but it doesn't look at other factors such as lifestyle or diet. Sickness may be due to any number of factors, including lifestyle, diet, and even location.

Aging and Illness - The Eternal Dance

Genetic markers for illness are likely to give someone a hint that they have a higher chance of getting sick with something at birth. As time goes by, that chance may increase or decrease based on several independent factors. However, one thing remains standard throughout a human being's life - as we age, our immune systems deteriorate. We may have been able to fight off a disease easier in our youth, but our bodies will have a more challenging time dealing with it as we get older. Genetics might hold the key to reversing or stopping aging, but it has far less impact on the day-to-day illnesses elderly people are likely to face.