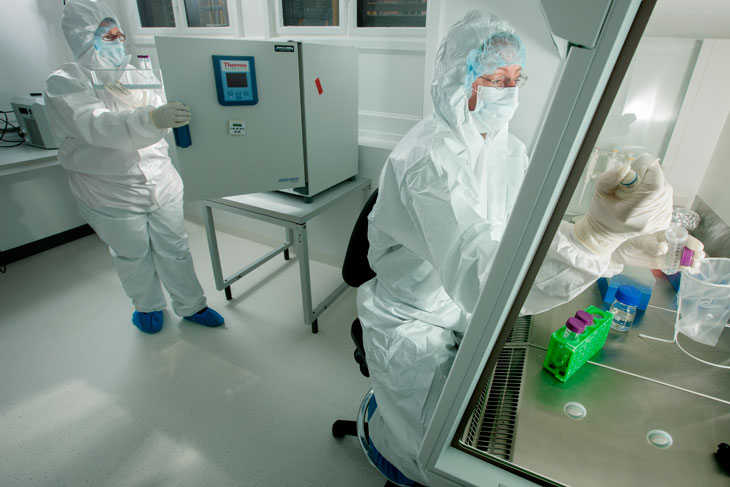 By Michael Greshko, Inside Science -- On Thursday, scientists announced a new, comprehensive re-analysis of the "Kennewick Man," an 8,500-year-old North American skeleton. Since it was discovered in 1996 in Kennewick, Washington, the nearly complete human skeleton has been at the center of a long-churning debate about how science and culture should be considered when determining the fate of human artifacts and remains.

The new findings, published online in the journal Nature, include the first successful DNA analysis of the remains and a thorough deconstruction of previous studies' underlying assumptions. The Danish and American researchers involved said that he is most closely related to modern Native Americans, a landmark reversal of much previous research that is sure to reignite the debate over whether or not he should be reburied.

"This new piece is seminal. It's a real game changer—a blockbuster," said David Hurst Thomas, a curator at the American Museum of Natural History, in New York. He was not involved with the study. "It's going to condition all of the conversation we're going to have about the way in which we approach these early skeletal collections. And I think it has very significant implications for the relationships between science and Native Americans."

The "Kennewick Man," called the Ancient One by local Native American tribes, is one of the oldest skeletons found in North America. Soon after the initial announcement of the finding, five local tribes argued that since the Ancient One was found on their ancestral homelands, he must be reburied immediately, invoking the Native American Graves Protection and Repatriation Act (NAGPRA), a 1990 law that facilitates the return of artifacts and human remains to Native American tribes. The US Army Corps of Engineers, which owned the property on which the Kennewick Man had been found, agreed, seizing custody of the remains from the team of scientists studying them.

While there was little debate that the Kennewick Man was native to the Americas—he lived and died some 4,000 years after humans first arrived—a group of scientists disagreed with the NAGPRA petition, arguing that the Kennewick Man's skull features were more consistent with Japanese and Polynesian indigenous groups, precluding him from being related to any modern Native American population. The scientists sued for the right to keep examining the skeleton, a grueling legal battle the scientists eventually won in 2004.

For the last decade, the remains have been stored under lock and key at Seattle's Burke Museum, after being studied by scientists led by Smithsonian anthropologist Douglas Owsley. The team released a richly detailed book in the fall of 2014 about the Kennewick Man's life history, but it doubled down on the interpretation that Kennewick Man isn't related to modern Native Americans.

This argument hinges on the assumption that the Kennewick Man's skull was a reliable means of assessing ancestry—a "nineteenth-century skull science paradigm," said Thomas, which increasingly has fallen out of favor among biological anthropologists. To use it as a meaningful genetic marker, an individual's skull shape would have to be directly heritable yet unaffected by changes in his or her diet, climate, or behavior. But when members of the research team reexamined the Kennewick Man's skull alongside hundreds of others, they found that they only had about a 25 percent chance of correctly identifying an individual skull's ancestry based on skull measurements.

"If you had a hundred Kennewick Mans from the same area, then you would have had the possibility to somehow associate [them] with contemporary populations," said Eske Willerslev, a University of Copenhagen geneticist and the study's senior author, during a phone conference. But this was not the case with previous analyses, calling them into question, he said.

The new skull analysis makes it clear that "it's very difficult to compare single specimens to population [averages]," said Frank Williams, an anthropologist at Georgia State University uninvolved with the study. Early human populations were smaller, more dispersed, and consequently more diverse, so when it comes to his skull measurements, "it shouldn't be surprising that Kennewick Man looks different" to modern Native Americans, Williams said.

Meanwhile, Willerslev's team worked to extract DNA from one of the Kennewick Man's hand bones, which hadn't been done successfully in the 1990s and early 2000s. Though it was highly fragmented and damaged, the DNA they obtained was enough to compare Kennewick Man against ethnic groups from all over the world, including the Polynesian and Japanese groups implicated by previous analyses.

That the tribes participated in this research is significant in and of itself, according to Thomas.

They had been, he said, "asked to butt out of their own history. The fact that the Colville would be part of this study is tremendously important, because they were so systematically excluded from the previous studies."

The study is sure to reopen the debate over if and when the Kennewick Man will be reburied. And somberly, it underscores the fact that Native Americans' cultural claims of kinship were ignored in the 1990s and early 2000s, leading tortuously to the current scientific claims.

"I guess you could that there's some kind of irony, right?" Willerslev said. "The reason why we can come to this conclusion, scientifically speaking, is because the remains were kept out for science. At the same time, you can say that he was a Native American, right?

"Maybe it should have all been different in the first place."

Michael Greshko is a science writer based in Washington, DC, who has written for NOVA Next, the National Academies, and NYTimes.com, among other outlets. He tweets at @michaelgreshko. Reprinted with permission from Inside Science, an editorially independent news product of the American Institute of Physics, a nonprofit organization dedicated to advancing, promoting and serving the physical sciences. Top image: DNA work at the GeoGenetics lab. Credit: Mikal Schlosser