Despite the icy cold and darkness, beneath the frozen surface of the sea in Antarctica thrives a rich and complex array of plants and animals. But what will happen to all those creatures if global warming reduces the ice-cover, as is predicted for coming decades?

UNSW marine ecologists Dr Emma Johnston and Graeme Clark have been working with the Australian Antarctic Division to survey marine communities along the striking coast of Wilkes Land, east Antarctica. 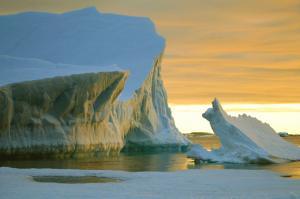 It's now clear that ice plays a major role in the ecology of shallow Antarctic marine systems, by reducing light penetration to the waters beneath.

The team has found marked differences in the composition of marine communities along a gradient of ice-cover.

"Diving beneath the ice in these areas is an eerie experience akin to diving into the deep sea."

In more exposed areas of the coast, however, ice breaks out early in the summer and canopy-forming algae that rely on light are dominant.

“If global climate change results in more frequent ice-breakout and reduced ice-cover then these unique protected shallow-water invertebrate communities are likely to be out-competed by algae,” says Dr Johnston.

Graeme Clark is completing a PhD in marine ecology with Dr Johnston in the School of Biological, Earth and Environmental Sciences. He has just returned from his second field trip to Antarctica.

Graeme has been diving in water so cold that it is less than zero degrees centrigrade. He used a custom-made “dry suit” and air supplied from the surface.

Returning to Sydney Graeme says: “I’m glad to be home but I’ll never forget diving in Antarctica, it’s been a fantastic experience that will stay with me forever.”

Due to the extreme conditions of fieldwork at latitudes higher than 60° south, most near-shore coastal studies until now have been undertaken at a limited number of sites.

But the UNSW/AAD survey has sampled 10 locations, through a combination of boat-based and ice-hole diving.

This study provides a direct comparison of the flora and fauna in communities subject to different durations of ice-cover. Together, they represent a suite of environmental conditions that are likely to be strong drivers of Antarctic rocky coast ecology.

Note: This article has been adapted from a news release issued by University of New South Wales.