Archaeologists are now turning to forensic crime lab techniques to hunt for dyes, paint, and other decoration in prehistoric textiles.

Although ancient fabrics can offer clues about prehistoric cultures, often their colors are faded, patterns dissolved, and fibers crumbling. Forensic photography can be used as an inexpensive and non-destructive tool to analyze these artifacts more efficiently, according to new Ohio State University research. 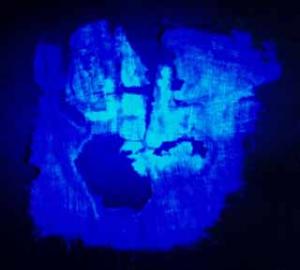 “Normally when you dig artifacts out of the ground, especially stone or ceramic ones, you wash them and they look sexy. But you can't do that with textiles,” said Christel Baldia, Ohio State University doctoral graduate in textiles and clothing. Baldia conducted the study with Kathryn Jakes, professor of textile sciences in the College of Education and Human Ecology at Ohio State, and published their findings in the April, 2007 issue of Journal of Archaeological Science.

Putting forensic photography to the test, Baldia and Jakes examined textiles from burial mounds built by the Hopewell, a prehistoric Native American people that flourished about 1600 years ago. In their study, the two investigators focused on pieces of fabric recovered from Ohio 's Seip burial mounds in southern Ohio. Experts believe some of the pieces belonged to a canopy of fabric that arched over the remains buried inside the mounds.

“Textiles often come out looking like brown rags, yet Native American dress is described as colorful by early travelers or pioneers.” Baldia said. “So we asked ourselves: ‘What can we do to better examine ancient textiles for colors we no longer see?'”

Forensic scientists use different light sources, such as ultraviolet and infrared, to visualize stains or fingerprints on clothing, but Jakes said no one has used those methods in looking at ancient textiles. “In a way, it's like shopping for clothes,” she said. “You need to see the clothing in different lighting—a fabric looks like it matches in the store's lighting, but when you bring it into sunlight the colors change.”

Under non-visible light, many pigments and dyes absorb light energy but release it in different wavelengths, or colors, of light. This behavior is called fluorescence, and it can reveal faded or deteriorated artwork in textiles. Fluorescence normally helps forensic investigators find blood stains, fingerprints, body oils, and other evidence where there appears to be none (such stains can be visible even after washing thoroughly).

To find fluorescent patterns in textiles, Baldia and Jakes simulated daylight, ultraviolet light (between 254 nm and 365 nm), and infrared light (between 800 nm and 900 nm), then photographed the artifacts with special film and light-filtering camera equipment. The photographs ultimately helped them see undetected patterns and markings in some of the artifacts they examined.

“The materials we examined from Hopewell burial mounds show gradations of color under different light sources,” Jakes said. “When artifacts have non-random changes in color like that, it indicates to us that there has to be dye or pigment. That's significant for ancient textiles because it reveals technologies prehistoric Native peoples were capable of.”

When archaeologists are curious about an ancient fabric's colors, they often sample the material at random and cause damage to it. Photographing artifacts with Baldia and Jakes' method before sampling, however, helps archaeologists build a focused game plan for sampling that minimizes harm to the material.

“The code of ethics from the American Institute of Conservation is ‘do no harm',” Jakes said. “For the artifact to stick around for as long possible, you have to be as minimally destructive in your sampling as possible.”

Baldia said sampling ancient fabric always requires removing a fiber or piece of yarn. “People essentially do this randomly, but forensic photography helps minimize damage by enabling us to sample strategically,” Baldia said. If archaeologists see a pattern in forensic photographs, she said, then the area most likely contains dye or paint—and focusing on such areas ultimately provides more information about ancient civilizations while cutting research costs.

Baldia explained that she and Jakes got the idea to photographically analyze textiles from museum painting conservators.

“Art museums use it to see if a painting has been painted over, if it's a forgery, and so on,” Baldia said. “We thought: ‘why aren't we doing this with ancient textiles?' Just like other art, fabrics are dyed and painted, and this is an inexpensive way to gather important information.”

The researchers hope their technique will become standard practice for analyzing textiles and even other organic artifacts, like wood or leather.

“I think this will help spur a lot of new findings,” Jakes said. “It's a great way to start looking at the stuff in the attics of museums across the country in a new way.”

Funding for the project was granted by the Ohio State University Graduate School and textile artifacts were provided by the Ohio Historical Society in Columbus .

Note: This story has been adapted from a news release issued by Ohio State University.