Our bodies, and the biological brilliance built in, are able to move with elegance and efficiency using a combination of appropriate biomechanics, neuronal control, and adaptivity.

Simulating that with technology has so far eluded technological advances because of the motor coordination of complex multi-joint movements and the complicated nature of their dynamics.

Yet now scientists at the University of Göttingen have simulated the neuronal principles that form the dynamics of human walking in a robot.

"RunBot", as it is called, lives up to its name – it holds the world record in speed walking for dynamic machines. Now its inventors have expanded its repertoire. With an infrared eye it can detect a slope on its path and adjust its gait on the spot. Just as a human, it leans forwards slightly and uses shorter steps. It can learn this behavior using only a few trials. 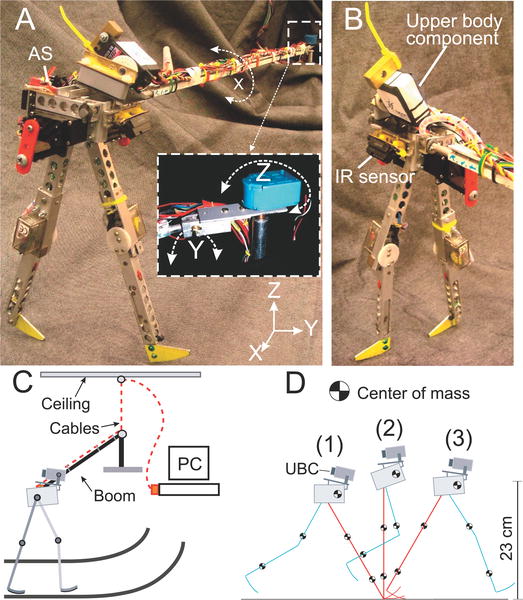 (A,B) The planar dynamic robot RunBot with its active UBC. It is constrained sagitally by a boom freely rotating in three orthogonal axes. (C) The experimental setup of the RunBot system. (D) Illustration of a walking step of RunBot.

The robots ability to abruptly switch from one gait to the other is due to the hierarchical organization of the movement control.

In this respect, it resembles that of a human and can hold as a human model. On the lower hierarchical levels, movement is based on reflexes driven by peripheral sensors. Control circuits ensure that the joints are not overstretched or that the next step is initiated as soon as the foot touches the ground. Only when the gait needs to be adapted, higher centers of organization step in – a process triggered by the human brain or, in case of the robot, by its infrared eye leading on to a simpler neural network. Because of the hierarchical organization adjustment of the gait can be achieved by changing only a few parameters. Other factors will be automatically tuned through the regular circuits.

At its first attempt to climb a slope, RunBot will fall over backwards, as it has not yet learned to react to its visual input with a change in gait. But just like children, RunBot learns from its failures, leading to a strengthening of the contact between the eye and the sites of movement control. Only once these connections are established, step length and body posture are controllable by the visually induced signal. The steeper the slope, the stronger RunBot will adapt its gait.