A newly designed porous membrane, so thin it's invisible edge-on, may revolutionize the way doctors and scientists manipulate objects as small as a molecule.

The 50-atom thick filter can withstand surprisingly high pressures and may be a key to better separation of blood proteins for dialysis patients, speeding ion exchange in fuel cells, creating a new environment for growing neurological stem cells, and purifying air and water in hospitals and clean-rooms at the nanoscopic level. 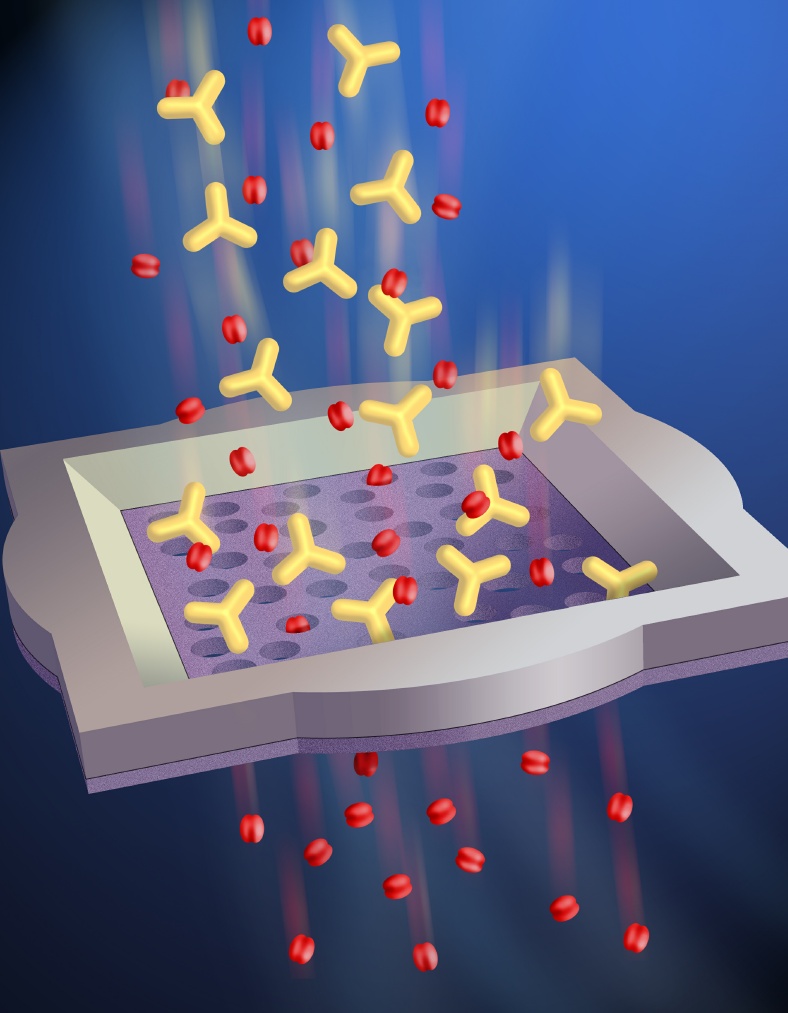 Details on the membrane, developed at the University of Rochester, appear in today's issue of the journal Nature.
"It's amazing, we have a material as thin as some of the molecules it's sorting, and even riddled with holes, but can withstand enough pressure to make real-world nano-filtering a practical reality," says research associate Christopher Striemer, co-creator of the membrane. "That ultra-thinness means much higher efficiency and lower sample loss, so we can do things that can't normally be done with current materials."

The membrane is a 15-nanometer-thick slice of the same silicon that's used every day in computer-chip manufacturing. In the lab of Philippe Fauchet, professor of electrical and computer engineering at the University, Striemer discovered the membrane as he was looking for a way to better understand how silicon crystallizes when heated.

He used such a thin piece of silicon—only about 50 atoms thick—because it would allow him to use an electron microscope to see the crystal structure in his samples, formed with different heat treatments. 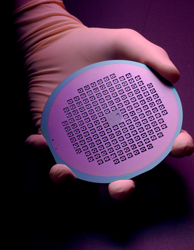 Striemer found that as parts of the silicon contracted into crystals, holes opened up in their wakes. Imagine a party of people spread out evenly throughout a room, but as the evening progresses and people huddle into cliques, scattered areas of empty floor open up.

In talks with Striemer and Fauchet, James L. McGrath, assistant professor of biomedical engineering, and his graduate student, Tom Gaborski, realized that since the membrane's holes were only nanometers in size, it might be possible to separate objects as small as proteins much more effectively than is being done now.

Current molecular-level filters use a polymer-based design that is a jumble of varying holes and tunnels. The sizes of holes in the polymer model vary greatly, and since its "holes" are really convoluted tunnels through the material, they require much more time for proteins to pass through, and they are prone to clogging.

Recently, researchers had tried to design an ideal filter by drilling holes into a thin slice of another silicon-based material with an ion beam. While the effort did result in a filter with regular holes, the process was too laborious to be cost effective, and its membrane was so brittle that it required an elaborate support structure to prevent it from shattering.

While McGrath knew he might have the exact filter researchers have been searching for, he needed to test if the predictions held up. "When you build something at this scale, you're closing in on the quantum world and you never know what the properties are going to be," he says.

When Striemer tested his design, he found that the same 50-atom thickness could hold back an astonishing 15 pounds per square inch of pressure.

To test the membrane, Gaborski placed a solution of two blood proteins, albumin and IgG, behind the membrane and forced it gently through the nanoscopic holes. In just over six minutes, the albumin had passed through, but the larger IgG protein was stopped.

And as if filtering by nanoscale size weren't enough, the Rochester team has found a way for the nano-filter to carry a fixed charge, effectively making the hole "smaller" for molecules of a certain charge than for others. In a single filter it's now possible to quickly and easily separate molecules by their size and their chargeï¿½a serious boon for fuel cell researchers, who wish to move only certain ions from one part of a fuel cell to another.

Separating molecules by size and charge efficiently is also the goal of kidney dialysis researchers. Johnson & Johnson recently gave the Rochester team a $100,000 grant to pursue developing the membrane's use in separating blood proteins with the hope of creating a more efficient method of dialysis.

"Kidneys do a much better job than dialysis machines of filtering blood proteins and keeping the ones you need, like albumin, and getting rid of toxins, which in some cases are smaller proteins," says McGrath. "They use a type of cellulose or plastic membrane with relatively poor discrimination. We think we can engineer these membranes to provide superior discrimination of proteins, which may make the process of dialysis faster and more effective than it is today."

The Rochester group sees many more applications for the membrane in the future. One of the most intriguing ideas is that it may play a role in growing neurons from stem cells.

Steve Goldman, Zutes Chair in Biology of the Aging Brain and professor of neurology at the University of Rochester, discussed the technology with McGrath and colleagues and was impressed. "It's a spectacularly interesting technology, that opens a realm of new possibilities in fields as diverse as organ reconstitution, proteomics and microfluidics," says Goldman. "Its potential applications to neuroscience, cell biology and medical research may be profound."

Recent evidence suggests that neurological stem cells may grow better when in the immediate vicinity of certain "helper" cells. A problem arises after the new neurons are grown, when scientists need to separate the neurons from these helper cells. McGrath suggests that the neurological stem cells can be adhered to one side of the membrane, and the helper cells on the other.

The silicon membrane is about the thickness of the cell's own membranes, meaning the two groups of cells can actually touch each other through the membrane's pores without passing through themselves. The chemical communication between the helper and stem cells can continue as if the two sets of cells were in direct contact, but after the neurons are fully formed, they can easily be separated from the helper cells.

The Rochester team is working to realize the potential of the membrane by refining its fabrication. Striemer found he could "tune" the size of the filter holes depending on the temperature to which the silicon is heated, but the process is not yet accurate enough for engineers to simply select any pore size and fabricate it.

The researchers have just founded a company, SiMPore, to commercialize the numerous applications of the nanomembrane. Many of the University's laboratories will be involved in testing and developing the membrane, and the founders have already been approached by semiconductor giants such as Intel to see if the filter could remove nanoparticles from solutions used in microchip-manufacturing.

The team is currently testing the membranes to see how they stand up to regular wear and tear, and how resistant they are to clogging, which is a chief problem with conventional filters.

Written from a news release issued by University of Rochester.