Observations and climate model results confirm that human-induced warming of the planet is having a pronounced effect on the atmosphere’s total moisture content.

“When you heat the planet, you increase the ability of the atmosphere to hold moisture,” said Benjamin Santer, lead author from Lawrence Livermore National Laboratory’s Program for Climate Modeling and Intercomparison. “The atmosphere’s water vapor content has increased by about 0.41 kilograms per cubic meter (kg/m²) per decade since 1988, and natural variability in climate just can’t explain this moisture change. The most plausible explanation is that it’s due to the human-caused increase in greenhouse gases.”

More water vapor – which is itself a greenhouse gas – amplifies the warming effect of increased atmospheric levels of carbon dioxide. This is what scientists call a “positive feedback.” 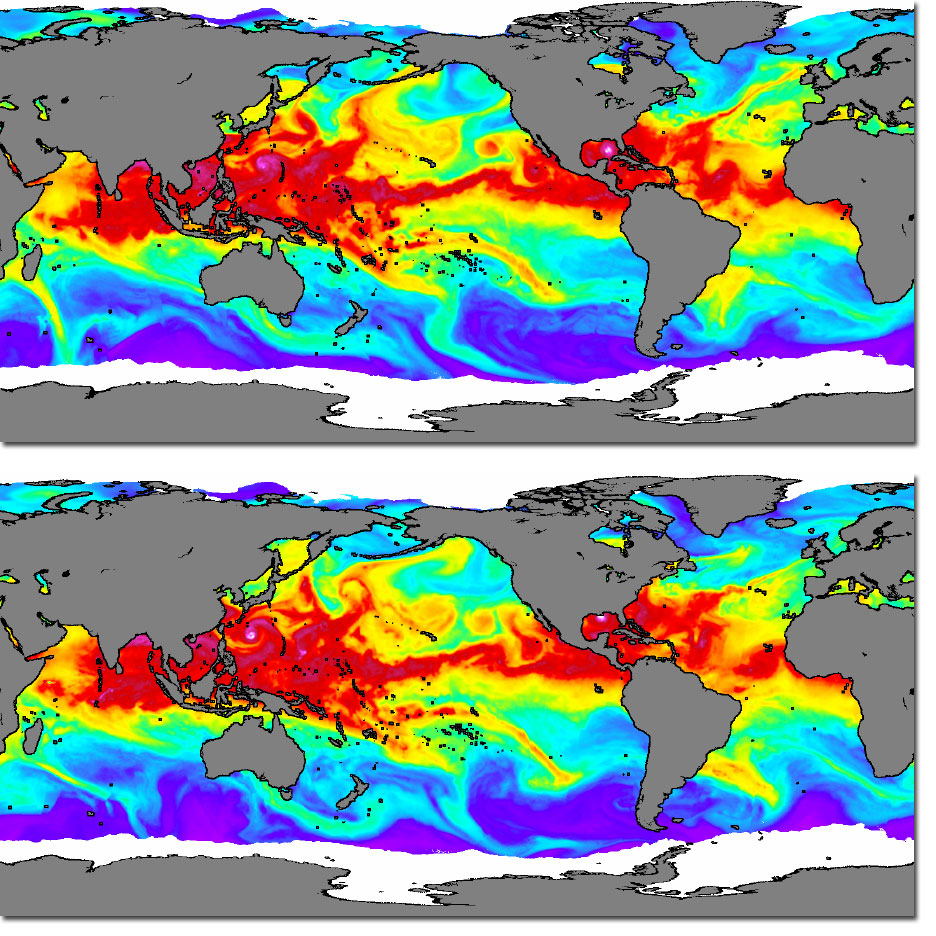 Using 22 different computer models of the climate system and measurements from the satellite-based Special Sensor Microwave Imager (SSM/I), atmospheric scientists from LLNL and eight other international research centers have shown that the recent increase in moisture content over the bulk of the world’s oceans is not due to solar forcing or gradual recovery from the 1991 eruption of Mount Pinatubo. The primary driver of this ‘atmospheric moistening’ is the increase in carbon dioxide caused by the burning of fossil fuels.

“This is the first identification of a human fingerprint on the amount of water vapor in the atmosphere,” Santer said.

“Fingerprint” studies seek to identify the causes of recent climate change and involve rigorous comparisons of modeled and observed climate change patterns. To date, most fingerprint studies have focused on temperature changes at the Earth’s surface, in the free atmosphere, or in the oceans, or have considered variables whose behavior is directly related to changes in atmospheric temperature.

The water vapor feedback mechanism works in the following way: as the atmosphere warms due to human-caused increases in carbon dioxide, methane, nitrous oxide, and chlorofluorocarbons, water vapor increases, trapping more heat in the atmosphere, which in turn causes a further increase in water vapor.

Basic theory, observations and climate model results all show that the increase in water vapor is roughly 6 percent to 7.5 percent per degree Celsius warming of the lower atmosphere.

The authors note that their findings, when taken together with similar studies of continental-scale river runoff, zonal-mean rainfall, and surface specific humidity, point toward an emerging human-caused signal in the cycling of moisture between the atmosphere, land and ocean.

“This new work shows that the climate system is telling us a consistent story,” Santer said. “The observed changes in temperature, moisture, and atmospheric circulation fit together in an internally- and physically-consistent way.”

Other scientists contributing to this research were Carl Mears and Frank Wentz at Remote Sensing Systems in Santa Rosa, Calif.; Tom Wigley, Jerry Meehl, and Warren Washington at the National Center for Atmospheric Research in Boulder; Tim Barnett and Dave Pierce at Scripps Institution of Oceanography in La Jolla; Wolfgang Brüggemann at the University of Hamburg in Germany;

Nathan Gillett at the University of East Anglia and Peter Stott at the Hadley Centre for Climate Prediction and Research (both in the U.K.); Toru Nozawa at the National Institute for Environmental Studies in Japan; and Mike Wehner at Lawrence Berkeley National Laboratory.