A Disturbance In The Force: 'Giant' Charge Density Oscillation Discovered In Nanomaterials
By News Staff | November 26th 2014 09:24 AM | Print | E-mail

In metals like copper and aluminium, conduction electrons move around freely, in the same way as particles in a gas or a liquid.

But when impurities are introduced into the metal's crystal lattice, electrons cluster together in a uniform pattern around the point of interference, resembling the ripples that occur when a stone is thrown into a pool of water. Scientists have now discovered how to strengthen these Friedel oscillations and focus them, almost like using a lens, in different directions.

They've discovered (Nature Communications, DOI: 10.1038/ncomms6558) that at a range of 50 nanometers, these "giant anisotropic charge density oscillations" are many times greater than normal. 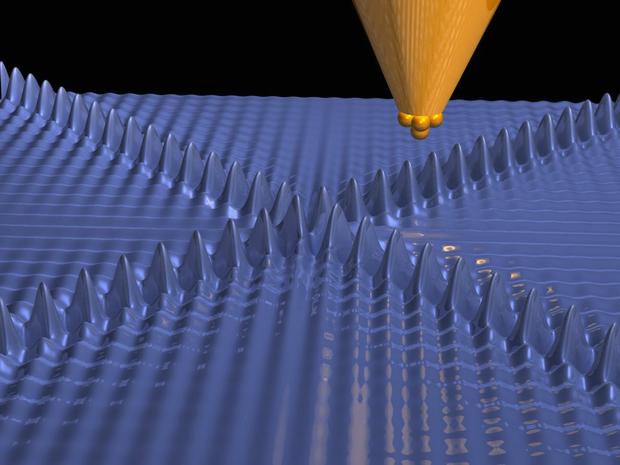 Electron density oscillations on the surface of a metallic film were made visible with the help of low temperature scanning tunneling microscopy. Credit: Forschungszentrum Jülich

Scientists at the Peter Grünberg Institute in Jülich noticed oddly-shaped electron waves in images obtained using scanning tunneling microscopy. The pictures showed the surface of a thin film of iron with oxygen impurities. "The wave pattern did not consist of closed rings as one would normally expect, but rather spread out crosswise from the point of interference in four different directions," said co-author Dr. Samir Lounis.

"The virtually flat Fermi surfaces of our samples act as an amplifier for Friedel oscillations, which spread out perpendicular to the surfaces", explains Lounis. The researchers have found out that this effect can be substantially intensified by varying the thickness of the metal. Depending on the number of atomic layers present, piles of Fermi surfaces are formed; the more of them there are, the greater the oscillations. The researchers called this effect the "Giant Anisotropic Charge Density Oscillations".

In principle, the oscillations could be used to exchange information between individual magnetic impurities and further enhance the level of integration of nanoelectronic components. As the oscillations are mainly produced by spins of a single orientation, they could also form the basis for so-called spin filter elements, which are important components in spintronic applications.