The 2014-2015 flu vaccine didn't work as well compared to previous years because the H3N2 virus recently acquired a mutation that concealed the infection from the immune system. A study published on June 25 in Cell Reports reveals the major viral mutation responsible for the mismatch between the vaccine strain and circulating strains. The research will help guide the selection of viral strains for future seasonal flu vaccines.

"Flu vaccines work best when they are similar to most circulating flu strains," says senior study author Scott Hensley of the Wistar Institute. "The World Health Organization recently recommended that a new H3N2 component should be incorporated into future formulations of seasonal flu vaccines. Our studies support this decision, since most circulating H3N2 strains are mismatched to the 2014-2015 vaccine strain."

Seasonal flu vaccines are designed to activate the immune system, but they are ineffective when viruses acquire mutations that help them evade the host's defenses. Flu vaccines must be updated regularly because influenza viruses continuously acquire mutations in a surface protein called hemagglutinin, which is targeted by antibodies in the infected host. 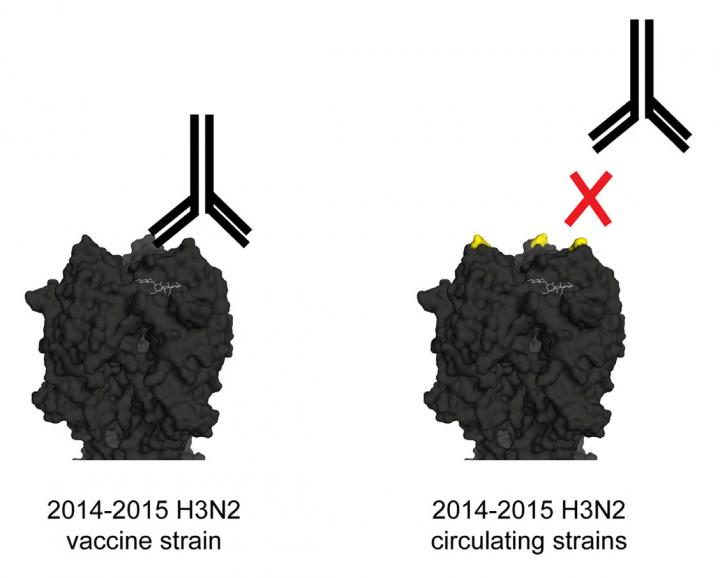 According to the Centers for Disease Control and Prevention, last season's flu vaccine was less than 20% effective at preventing medical visits associated with seasonal influenza illness, compared with up to 60% effectiveness of other seasonal flu vaccines during the past 10 years. Although previous studies revealed a mismatch between the H3N2 vaccine strain and most H3N2 strains circulating in the Northern Hemisphere during the 2014-2015 season, until now, it was not clear exactly which viral mutations were responsible for this mismatch.

To answer this question, Hensley and his team applied a reverse-engineering approach to convert the 2014-2015 H3N2 vaccine strain into a panel of H3N2 strains with hemagglutinin mutations that are present in currently circulating H3N2 strains. They then examined whether these viruses would be recognized by antibodies present in blood samples taken from ferrets and sheep that had been exposed to the H3N2 vaccine strain. They found that a single mutation in the F159S amino acid residue of hemagglutinin decreased antibody recognition by as much as 75% compared with antibody recognition of the unaltered H3N2 vaccine strain.

The researchers then performed tests with blood samples taken from humans before and after immunization with the 2014-2015 vaccine. They found that vaccination was significantly less effective at increasing antibody recognition of the F159S-mutant strain compared with the unaltered vaccine strain. Taken together, the findings show that a single viral mutation could largely explain the ability of flu strains to get past the 2014-2015 flu vaccine.

Hensley and his team are now examining whether the new 2015-2016 H3N2 vaccine strain elicits robust immune responses to the different types of H3N2 strains that are currently circulating. To guide the design of subsequent vaccines, they are also attempting to predict how flu viruses might mutate in the future.

In the meantime, Hensley urges the public to continue to get annual flu vaccines. "Most years, vaccine strains are well matched to most circulating strains, and seasonal flu vaccines are usually more effective," he says. "The best way to prevent flu infection is by getting a flu vaccine."