There is a reason alternative medicine has an adjective in front of it - it can't survive double-blind clinical trials the way medicine has.

But at least it isn't harmful. In most cases. However, aconite, a class of plant that is also known as wolfsbane or devil's helmet and is in a poisonous genus of the buttercup family, recently led to facial tingling and numbness within minutes of ingesting, followed by nausea, vomiting, diarrhea and abdominal pain 30 minutes later.

The herbal preparation by a Chinese herbal medication practitioner in Melbourne for back pain resulted in life-threatening heart changes, lead to new calls to educated the public and warn practitioners who prescribe "complementary" treatments instead of medication. 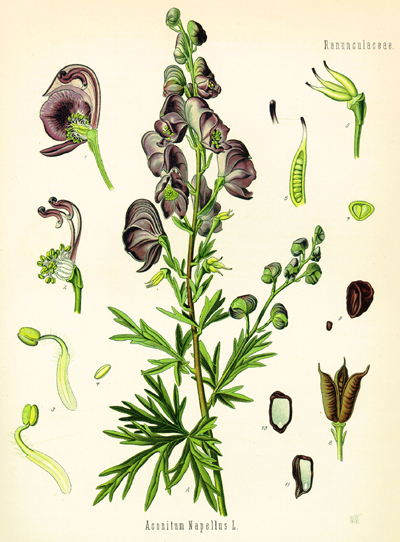 Writing in Emergency Medicine Australasia, Dr. Angelly Martinez and Dr. Nicky Dobos from the Intensive Care Unit at the Royal Melbourne Hospital, along with Dr. Joe-Anthony Rotella and Dr. Shaun Greene from Austin Health, write that the patient was given verbal instructions by the Chinese herbal medicine practitioner to boil the mixture of plant and animal material for 45 minutes prior to ingestion. She boiled it for only 30 minutes, showing that people who are gullible enough to buy alternative medicine are ill-equipped to prevent harming themselves with it.

By the time she was admitted to the emergency department, she had developed severe cardiovascular toxicity, which required admission to the intensive care unit.

"Aconite poisoning is not a toxicological condition that many Australian doctors would be aware of and has not been described in Australian peer reviewed medical literature for over 20 years," said Greene. "The case serves as a reminder that clinicians can access expert poisoning advice from a clinical toxicologist via the Poisons Information Centre system accessible via telephone (13 11 26) throughout Australia."

This case illustrates the potentially lethal nature of aconite poisoning. Chinese herbal medicines are being used increasingly in Australia as the Chinese immigrant population increases.

"Regulatory agencies should enact measures to ensure patients are provided with accurate advice regarding safe use of Chinese herbal medicines," Greene said.