Technological advances may be ushering in a new era of understanding in the search for fundamental physical particles - including dark matter - said Professor Alex Murphy of the University of Edinburgh's School of Physics and Astronomy at the AAAS meeting in Washington, D.C.

The most sensitive of these experiments is Large Underground Xenon, or LUX, detector - which is located a mile underground in South Dakota. Recent improvements have increased the device's chances of identifying sub-atomic particles called WIMPs - weakly interacting massive particles - which are believed to be the main component of dark matter. 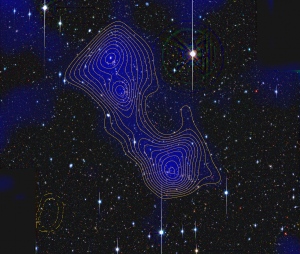 Dark-matter filaments such as the one bridging the galaxy clusters Abell 222 and Abell 223 are predicted to contain more than half of all matter in the Universe. Credit: Jörg Dietrich, University of Michigan/University Observatory Munich.

Professor Murphy said, "Technology has enabled us to ramp up our search for this fundamental material, and its place in the physical realm."