News Staff
As has been demonstrated, even after complete spinal paralysis the human spinal cord is able to trigger activity in the leg muscles using electrical pulses from an implanted stimulator.

Now a team of researchers has succeeded in identifying the mechanisms the spinal cord uses to control this muscle activity. These mechanisms still work even if the neural pathways from the brain are physically interrupted as the result of a spinal cord injury. It is the first time throughout the world that the spinal-cord activation patterns for walking have been decoded, say the authors of a new paper.

Paraplegics still have neural connections (locomotion centers) below the site of the injury and these can trigger rhythmic movements in the legs. "Using statistical methods, we were able to identify a small number of basic patterns that underlie muscle activities in the legs and control periodic activation or deactivation of muscles to produce cyclical movements, such as those associated with walking. Just like a set of building blocks, the neural network in the spinal cord is able to combine these basic patterns flexibly to suit the motor requirement," explains study author Simon Danner, from the Center for Medical Physics and Biomedical Engineering of MedUni Vienna. 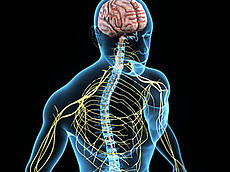 Although the brain or brain stem acts as the command center, it is the neural networks in the spinal cord that actually generate the complex motor patterns. These locomotion centers are to be found in most vertebrates. A well-known example of this is when the spinal cord continues to transmit signals even when the brain is no longer involved, as in the headless chicken running around the farmyard. Even after control by the brain has been lost, the spinal cord continues to send out motor signals, which are translated into movements of the legs and/or wings.

These new findings relating to the basic patterns for triggering and coordinating muscle movements in the legs should also help in developing new approaches to rehabilitation aimed at utilizing those neural networks that are still functional following an accident and the resulting paralysis by stimulating them electrically. This opens the way to new therapeutic options for helping paraplegics to at least partially regain lost rhythmic movements.

Exactly how the neural networks need to be stimulated depends upon the patient's individual injury profile and is the subject of further studies. To help with this, the scientists at MedUni Vienna have developed a unique, non-invasive method for stimulating the spinal cord, which involves attaching electrodes to the surface of the skin. "This method allows easy access to the neural connections in the spinal cord below a spinal injury and can therefore be offered to those suffering from paraplegia without exposing them to any particular medical risks or stresses," says Karen Minassian, senior author.

The publication is the result of a collaboration between the Medical University of Vienna (Center for Medical Physics and Biomedical Engineering, working group led by Winfried Mayr), the Otto-Wagner Hospital (Neurology Center, Heinrich Binder), Vienna University of Technology (Institute for Analysis und Scientific Computing, Frank Rattay) and Baylor College of Medicine, Houston, TX (Milan R. Dimitrijevic) and is funded by the Vienna Science, Research and Technology Fund (WWTF) and by the "Wings for Life – Spinal Cord Research Foundation".