Chlorophyll Fluorescence: Forest Glow Of Photosynthesis Activity Can Be Tracked From Space
By News Staff | May 2nd 2015 06:33 AM | Print | E-mail

A research team has provided ground-truth for a method of measuring plant photosynthesis on a global scale: from low-Earth orbit.

They have found that chlorophyll fluorescence, a faint glow produced by plant leaves as a byproduct of photosynthesis, is a strong proxy for photosynthetic activity in the canopy of a deciduous forest.

And they can track the changes in this dull forest glow in real time from space.

When plants photosynthesize, chlorophyll molecules in leaves absorb photons from sunlight. The plant then converts the energy from those photons into sugar and other carbohydrates using carbon dioxide absorbed from the atmosphere as a carbon source. But not all the photons absorbed by chlorophyll are for photosynthesis. Around 1 percent of them are re-emitted as lower energy photons, which creates the faint glow known as fluorescence.

The glow isn't visible to the naked eye, but a few years ago scientists from NASA and the Japanese Aerospace Exploration Agency found that spectrometers aboard climate satellites could detect fluorescence coming from croplands and forest canopies. That raised the possibility of measuring photosynthesis on a global scale. 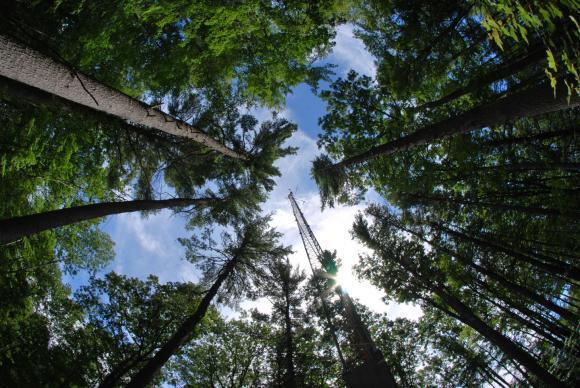 Catching photons on the rebound

Currently, the gold standard for measuring photosynthesis involves directly measuring the exchange of carbon dioxide gas between plants and the air directly around them. The technique, called eddy covariance, relies on tower-mounted detectors that can only monitor an area of a few square kilometers. Even with hundreds of towers around the world, eddy covariance can still only provide a patchwork of data. That's part of the reason scientists have looked to orbital instruments to get a broader view of photosynthesis.

Scientists are just beginning to measure the extent to which orbital measurements of fluorescence correlate to ground-based measurements of photosynthesis. A few studies have shown fluorescence to be a good proxy over cropland, but there hadn't been any studies looking at the link to a forest canopy over an extended period. This latest study fills that gap.

For the study, the researchers made use of the Harvard Forest in Massachusetts. Over the course of a full summer, they compared photosynthesis measurements from the forest's eddy covariance tower with fluorescence data taken with a tower-mounted spectrometer above the forest. The readings from the ground-based spectrometer were then compared to readings from an orbital instrument aboard the European Space Agency's GOME-2 satellite.

The study showed that fluorescence measurements from both the ground-based spectrometer and the satellite were tightly correlated to photosynthesis as measured by eddy covariance, capturing both day-to-day fluctuations and fluctuations that occurred over the course of the summer.

The fact that fluorescence appears to capture daily fluctuations of photosynthesis gives it an advantage over other remote sensing methods. One current method uses an index of greenness as a proxy for plant production. But greenness can sometimes lag well behind plant stress, Yang said, so fluorescence could be a much better way of getting real-time data.

"The findings help to establish an empirical link between fluorescence and photosynthesis and help to validate the satellite product with ground-based observations," Yang said.