News Staff
The coffee berry borer (Hypothenemus hampei) is a plague that affects coffee crops. It has a detoxification system based on microbial communities so it can perform its life cycle in the plant while exposed to high levels of caffeine.

In human terms, the caffeine is equivalent to 500 espressos , which would kill a person.

"The aim was to study which are they and how they are associated with the digestive tract of the insect. For the study we took samples of insects from different locations like Hawaii, Indonesia, Puerto Rico, Mexico, Kenya, India and Guatemala," Javier A. Ceja Navarro of Berkeley National Laboratory told Investigación y Desarrollo. 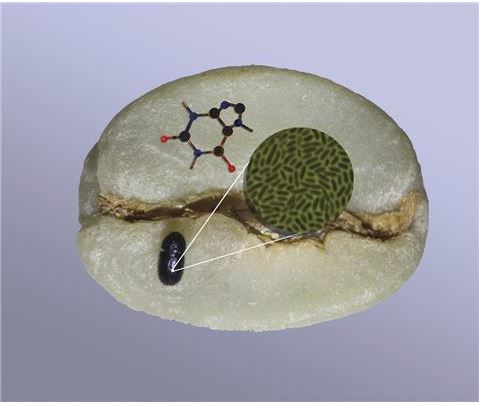 The insects have different microbial communities in different countries, sharing just a set of 19 species of bacteria. Ceja extracted the digestive tract of the insect and isolated 13 species of bacteria with the ability to survive only with caffeine, to see if it was possible to control them. After analysis, the team decided to test antibiotics on the borer beetle, to see if it was still able to degrade caffeine and the result was negative.

"We removed the microbial communities in the digestive tract and the transformation of caffeine stopped, then decided to take some of the isolated microorganisms, reintroduce them in the bug and see if the ability to degrade a bit of caffeine came back and it did."

Currently, the team is trying to develop new strategies to control the microbes that support the destructive ability of the coffee berry borer. "We look to take away the beetle’s taste for coffee and for it to be affected by consuming it like any other insect would," says the researcher.
News Articles
More Articles All Articles
About