Six mating positions (amplexus modes) are known among the almost 7,000 species of frogs and toads found worldwide. However, the Bombay night frog (Nyctibatrachus humayuni), which is endemic to the Western Ghats Biodiversity hotspot of India, mates differently. In a new study, scientists have described a new (seventh) mode of amplexus -- now named as dorsal straddle.

In Bombay night frogs, the male does not embrace the female but straddles over her back with his hands holding or resting on substrates such as a leaf, branch or tree trunk. At this moment, the male appears to release sperm over the female's back and then moves away. After that, the female lays her eggs, which are then fertilised by the sperm trickling down her back. Thus there is no contact between the sexes during egg laying and fertilisation. In other frogs, females usually lay eggs during the male-female embrace (amplexus) and males simultaneously release sperms that fertilize the eggs during this process. "This is a remarkable frog with an unprecedented reproductive behavior, which is unique for a number of reasons. This discovery is fundamental for understanding the evolutionary ecology and behavior in anuran amphibians" says Prof. SD Biju from University of Delhi, who led this study.

The uniqueness of this frog does not end there. Females of the Bombay night frog call during breeding season. While males of all frogs call to attract mates, female calls are known to occur in only 25 species the worldwide. Fights between competing males are also a common occurrence among Bombay night frogs. When a male intrudes the territory of another male, a fight ensues until the intruder is forcefully made to leave. The research team also observed eggs of Bombay night frog being eaten by snake -- the first documented observation of snakes eating frog eggs in India. 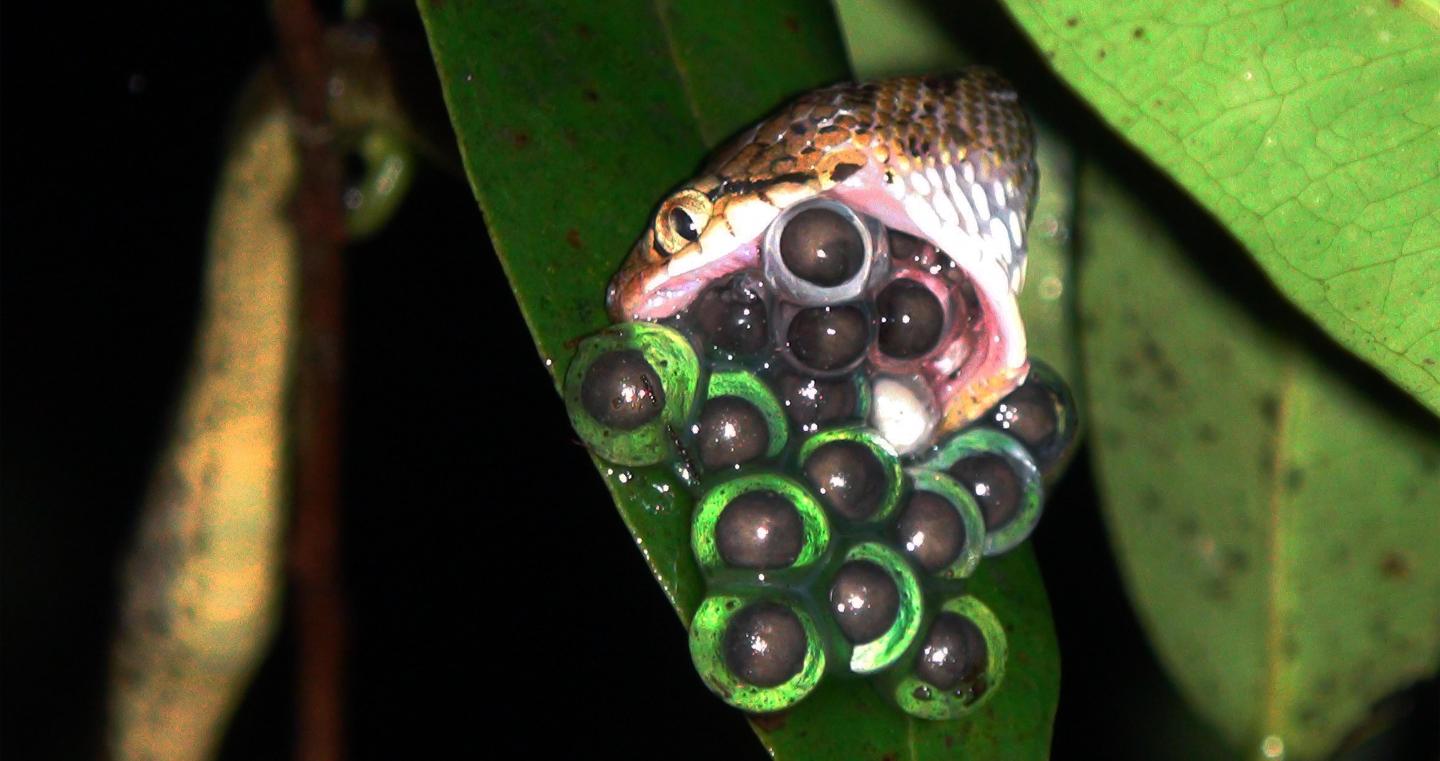 Eggs of the Bombay Night frog being eaten by a snake. Credit: SD Biju

Indian night frogs are an ancient group of frogs, which diversified approximately 70-80 million years ago. Among these, Bombay night frogs are predominantly stream dwelling frogs and during breeding season they can be seen calling from the ground and overhanging vegetation in large numbers, soon after sunset.

These findings were published in the journal PeerJ on June 14, 2016 by a team of scientists from University of Delhi, NCBS, Bangalore and the University of Minnesota, USA. The research was conducted over a total of 40 nights in the field between 2010 and 2012, during monsoon season in the Western Ghats.