Did Some Baseball Stars Get Favorable TV Coverage In Steroid Controversy?
By News Staff | November 21st 2014 10:35 AM | Print | E-mail

Yet each is clouded by suspicion or admission of steroid use.

Did some of them get favorable treatment compared to others? A paper in Communication Research finds that over 12 years of national television news coverage, Barry Bonds got twice as many negative stories as McGwire and 4X as many as Palmeiro.
The data is based on an analysis of 1,247 news transcripts from 2000 to 2011 from seven national networks - ABC, CBS, CNBC, CNN, FOX, MSNBC and NBC - obtained through LexisNexis.

What accounts for that? Do journalists want players to admit to things? Is it racism among journalists? Bonds is African-American, McGwire is white, and Palmeiro is Latino.  Whatever the cause, Bonds got 544 negative stories, McGwire had 252 and Palmeiro had 137. If you look at the quality of those players, Bonds clearly stands out. Steroids could not have made Bonds get all of those walks, he was a great player whether he did them or not, whereas Palmeiro was just above average and McGwire would have been forced out due to injury in 1991. 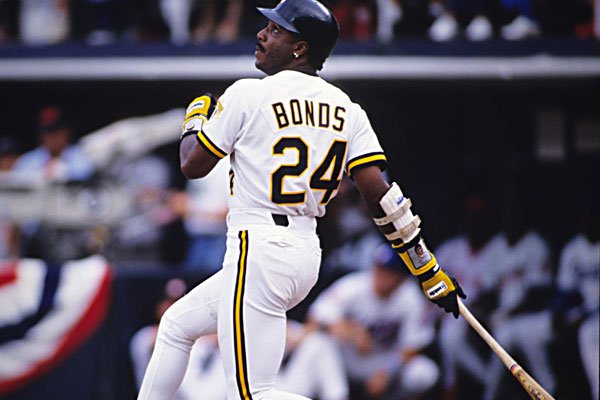 Barry Bonds won multiple MVPs before free agency and the largest contract in Major League Baseball history took him to San Francisco. He was a great player whether steroids became part of his Giants story or not. Link: BuccoNation

Despite that, the analysis also found that the news coverage on Bonds was much more likely to focus on claiming Bonds used steroids to gain a competitive edge rather than for rehabilitation from injury. Those references ran 131 to five for Bonds, versus 43 to 10 for McGwire and seven to one for Palmeiro.

No matter how biased journalists may have been, baseball fans see through it. An online survey in 2011 for a separate study also included in the paper were much more supportive of Bonds being elected to baseball's Hall of Fame, over either McGwire or Palmeiro. The survey included 325 participants from 42 states, all of them users of either ESPN's MLB team forums or Google Groups baseball forum.

"Despite the negative attention Bonds received in the news, and survey participants perceiving him as not very likeable compared to the other two, these fans had a more favorable attitude toward his election," said University of Illinois professor Brian Quick, lead author of the paper.

Quick says previous research on the way racial and ethnic groups have been portrayed by sportscasters and the non-sports news media adds credence to the racism claim.

According to that research, sportscasters have frequently characterized black athletes as superior athletes with an inspiring background of overcoming hardship as a child, Quick said. White athletes are more often described as hard-working, intelligent and exceptional leaders. And Latinos are seriously underrepresented in the media overall, and often depicted in limited or marginalized roles.

Bonds, the son of a Major League Baseball star, did not have the up-from-hardship storyline working for him, Quick said. He also was not well-liked by the sports media. "He becomes the perfect villain, ultimately," Quick said.