Drought And Dry Lightning Have Made It A Long California Fire Season
By News Staff | September 16th 2014 04:10 PM | Print | E-mail

Fires, mudslides and earthquakes are part of California life but residents might be wishing for a few more mudslides right about now. The temperature is nothing special but the worst drought in 20 years and dry lightning have meant an abundance of forest fires.

On August 12th, lightning struck and started a fire that grew into the Happy Camp Complex. Currently over 113,000 acres have been affected and the fire is only 55% contained as of today. Strong winds tested fire lines yesterday (8/15), and are expected to do so again today. Despite the high winds, existing fire lines held with no spotting or expansion outside current containment lines. The south end of the fire continued backing slowly toward Elk Creek in the Marble Mountain Wilderness.

The Man Fire joined with the Happy Camp Complex yesterday and will be managed by California Interagency Incident Management Team 4 as of 6:00am on Wednesday, September 17, 2014. 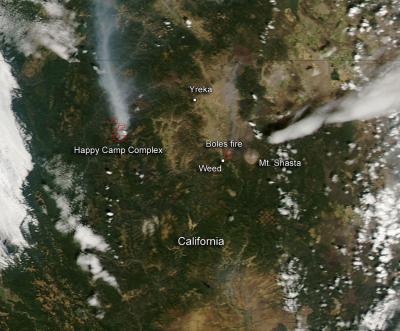 Nearby the Happy Camp Complex, near Mt. Shasta and the town of Weed, another fire erupted that fire officials said quickly damaged or destroyed 100 structures Monday (8/15). Hundreds of firefighters were trying to contain that fire.

A California Fire spokesman said more than 300 acres were scorched and more than 100 structures damaged or destroyed in just a few hours. The blaze, dubbed the Boles Fire, also led to the closure of Interstate 5 and U.S. 97.

Weed is in Siskiyou County, about 50 miles south of the California-Oregon border. With strong winds, the fire was able to rage into the community before firefighters could get equipment to the blaze.