News Staff
Caloric restriction in mice has been touted for accomplishing everything from increasing longevity to lowering cholesterol, but those animals are weaned on that from birth, and humans will go to jail trying it with their children.

It may be unnecessary - and the diet advice we have gotten for the last 30 years may be also. A new study found that a diet of high carbohydrates and low protein - the opposite of what has been recommended - improves insulin sensitivity and can provide benefits similar to those obtained with calorie restriction.

The investigators compared three 8-week diets varying in protein-to-carbohydrate ratio under conditions where food was restricted or food was available at all times. Of the three, low protein, high carbohydrate (LPHC) diets offered when food was always available delivered similar benefits as calorie restriction in terms of insulin, blood sugar, and cholesterol levels, despite increased food intake.

Even though the mice on LPHC diets ate more when food was always available, their metabolism was higher than that of mice on the calorie-restricted diet, and they did not gain more weight. Calorie restriction did not provide any additional benefits for LPHC mice. 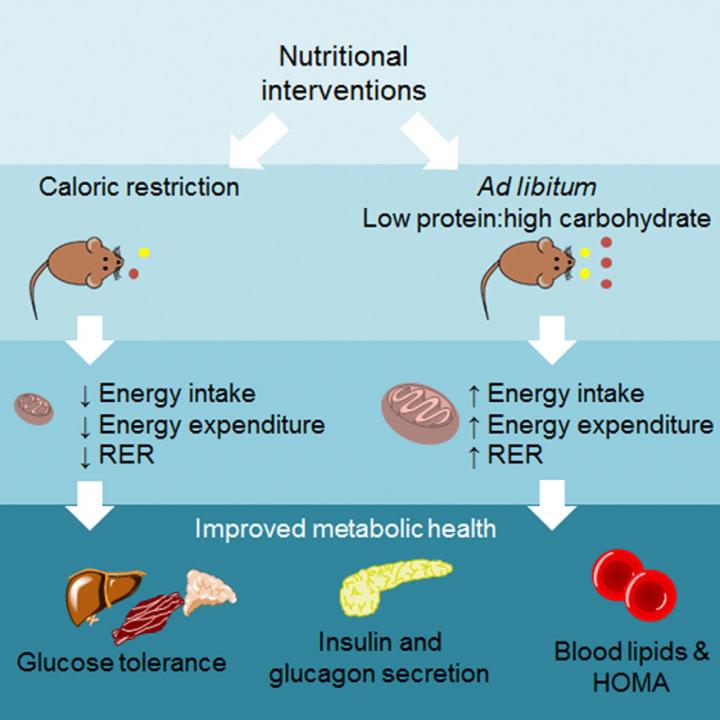 "We've shown that when compared head-to-head, mice got the same benefits from a low protein, high carbohydrate diet as a 40% caloric restriction diet," says senior author Stephen Simpson, Academic Director of the University of Sydney's Charles Perkins Centre. "Except for the fanatical few, no one can maintain a 40% caloric reduction in the long term, and doing so can risk loss of bone mass, libido, and fertility."

Additional research is needed to determine how LPHC diets affect long-term metabolic health and survival, as well as to what extent the type and quality of proteins and carbohydrates matter. "An important next step will be to determine exactly how specific amino acids, the building blocks of proteins, contribute to overall health span and lifespan," says lead author Samantha Solon-Biet, also of the Charles Perkins Centre.

If the study's results apply to humans, adjusting protein and carbohydrate intake could lead to healthier aging in a more realistic manner than drastically cutting calories. "It still holds true that reducing food intake and body weight improves metabolic health and reduces the risk of diseases like type 2 diabetes, obesity, and fatty liver disease," says Simpson. "However, according to these mouse data and emerging human research, it appears that including modest intakes of high-quality protein and plenty of healthy carbohydrates in the diet will be beneficial for health as we age."

Citation: Solon-Biet et al. "Dietary protein to carbohydrate ratio and caloric restriction: comparing metabolic outcomes in mice", Cell Reports, DOI:10.1016/j.celrep.2015.05.007. Supported by the National Health and Medical Research Council of Australia and the Ageing and Alzheimer's Institute of Concord Hospital. This study was funded in part by the National Institute on Aging Intramural Research Program of the National Institutes of Health.
News Articles
More Articles All Articles
About