News Staff
A brilliant-green sea slug can live for months at a time "feeding" on sunlight like a plant and now scientists have the first direct evidence that its chromosomes have some genes that come from the algae it eats.

Those genes help sustain photosynthetic processes inside the slug that provide it with all the food it needs.

Importantly, this is one of the only known examples of functional gene transfer from one multicellular species to another, which is the goal of gene therapy to correct genetically based diseases in humans. 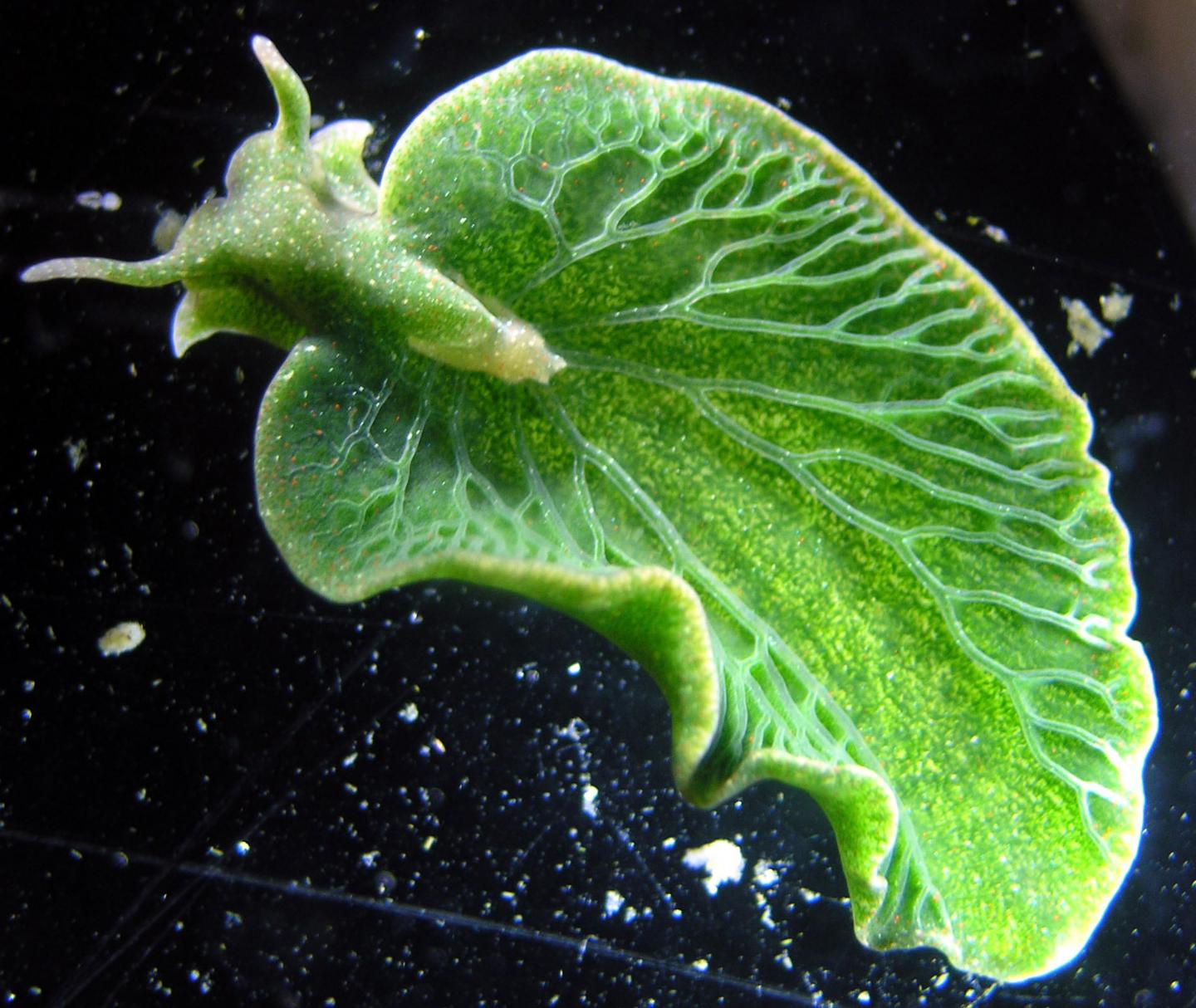 The rich green color of the photosynthesizing sea slug, Elysia chlorotica, helps to camouflage it on the ocean floor. Credit: Patrick Krug

"Is a sea slug a good [biological model] for a human therapy? Probably not. But figuring out the mechanism of this naturally occurring gene transfer could be extremely instructive for future medical applications," says study co-author Sidney K. Pierce, an emeritus professor at University of South Florida and at University of Maryland, College Park.

The team used an advanced imaging technique to confirm that a gene from the alga V. litorea is present on the E. chlorotica slug's chromosome. This gene makes an enzyme that is critical to the function of photosynthetic "machines" called chloroplasts, which are typically found in plants and algae.

It has been known since the 1970s that E. chloritica "steals" chloroplasts from V. litorea (called "kleptoplasty") and embeds them into its own digestive cells. Once inside the slug cells, the chloroplasts continue to photosynthesize for up to nine months--much longer than they would perform in the algae. The photosynthesis process produces carbohydrates and lipids, which nourish the slug.

How the slug manages to maintain these photosynthesizing organelles for so long has been the topic of intensive study and a good deal of controversy. "This paper confirms that one of several algal genes needed to repair damage to chloroplasts, and keep them functioning, is present on the slug chromosome," Pierce says. "The gene is incorporated into the slug chromosome and transmitted to the next generation of slugs." While the next generation must take up chloroplasts anew from algae, the genes to maintain the chloroplasts are already present in the slug genome, Pierce says.

"There is no way on earth that genes from an alga should work inside an animal cell," Pierce says. "And yet here, they do. They allow the animal to rely on sunshine for its nutrition. So if something happens to their food source, they have a way of not starving to death until they find more algae to eat. "

This biological adaptation is also a mechanism of rapid evolution, Pierce says. "When a successful transfer of genes between species occurs, evolution can basically happen from one generation to the next," he notes, rather than over an evolutionary timescale of thousands of years.