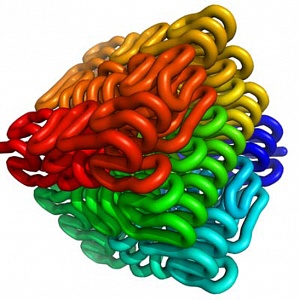 A lot of problems, associated with the mixing of the liquid in the microchannels, could be solved via proper organization of the inhomogeneous slip on the walls of these channels, according to a joint group of Russian and German scientists lead by Olga Vinogradova, professor at the M.V. Lomonosov Moscow State University.

The work is related to the field of microfluidics, studying the fluid flow in the microchannels, which is essential in chemistry and biomedical research where there is a necessity to carry out chemical synthesis of small doses of substance or to perform separation of particles of the biomaterial. Flow in such channels is laminar (i.e. layered). There is no convection on laminar flow, that is why the liquids mix very slowly, only by diffusion. Physicists managed to find a solution to the problem based on the use of superhydrophobic surfaces. Such surfaces are made from water repellent material. Moreover, they are microrough.

As a result, air microbubbles are retained in the recesses of a superhydrophobic surface texture. Such an 'air cushion' makes superhydrophobic surface very slippery. In this paper, researchers have suggested to use superhydrophobic texture in the form of parallel grooves, inclined at a certain angle to the axis of the channel, wherein the upper wall the grooves are turned to the right and at the bottom they are turned to the left. Such grooves impart the walls of the channel with anisotropic characteristics as the liquid flows along them faster than transversely.

Moreover, it turned out that apart from the main channel flow there is a secondary shear fluid flow in the transverse direction to the axis of the channel. As a result, the fluid begins to roll slightly near the walls in the same way a bullet rotates moving along a rifled barrel of a rifle.

"If the fluid moves very slowly, then a very elongated transverse vortex forms in the channels," says Tatiana Nizkaya, co-author of the paper at the A.N. Frumkin Institute of Physical Chemistry and Electrochemistry. "However, with an increase in liquid flow speed the liquid begins to 'sideslip' on turns."

This vortex is superimposed by the smaller ones, which are limited by the neighboring grooves. It means that the artificial turbulence is being formed in the flow.

"Such flows may be useful for mixing liquids or for the separation of particles of different sizes," Evgeny Asmolov adds.

The team carried out computer simulations of the predicted effect by the method of dissipative particle dynamics. They analyzed the trajectory of the model of fluid particles in a microchannel and studied the dependence of the shape and the number of vortices on the flow rate.  According to the simulation results, the authors concluded that there is critical speed at which the single large vortex is broken up into many small ones, what eventually leads to a new efficient mechanism of mixing liquids.

"Systems for efficient mixing in microchannels, based on the use of a special 'pattern' of the surface of the channel, already exist. For example, to spin liquid, specific obstacles at the bottom of the channel have a herringbone pattern. This time the vortex occurs due to the side walls," says Nizkaya. "Our method is much easier as you simply take two superhydrophobic planes with stripes of gas and rotate them at an angle to each other. Furthermore, the partition of the vortex into many smaller ones allows simultaneously mixing across the width of the channel."