Science, technology, engineering and mathematics (STEM) fields used to be considered the domain of white men, especially in academia, and that has changed, but universities are criticized because of the pace of change - researchers with tenure cannot just be fired and replaced.

Change is instead happening over time - women are hired in greater percentage than their representation in most academic fields now, but that only happens when new jobs open up. The social sciences are heavily dominated by women today and the life sciences are not far behind - more than 50 percent of PhDs are women and 60 percent of undergraduates are. Only the physical sciences skew toward males. It would seem that the real equality work remaining for academia is in keeping minorities and handicapped people and being less intolerant of differing political beliefs.

Not so, say scholars from Arizona State University and University of Washington, who say they have evidence of gender-based gaps in both achievement and class participation in the life sciences. 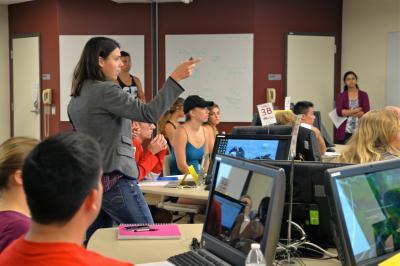 "Often, gender differences are assumed to be present only in fields where males outnumber females and where there is a strong emphasis on math," said Sara Brownell, assistant professor and education researcher at Arizona State University. "But we are seeing it in undergraduate biology classrooms that do not focus on math — where females make up about 60 percent of the class — indicating that this could potentially be a much more systemic problem. It's likely this is not unique to physics or biology, but rather true of most undergraduate classrooms."

They looked at 23 classes which included mostly sophomores and biology majors and were generally taught by two instructors each. Of more than 5,000 students enrolled in the courses, nearly 60 percent were female. They found that even with similar college GPAs, female students had average exam scores of 2.8 percent lower than male students and while female and male students were equally likely to ask a question during class, when asked to volunteer responses to questions, 63 percent of males on average spoke up — even though they comprised only 40 percent of the classroom.

Why don't women speak up more? Co-author Sarah Eddy, a postdoctoral scholar at the University of Washington, says schools don't need to just recruit more women, they need to get women to participate.  "Introductory biology classes are the first opportunities for many students to interact with professionals and peers in their intended fields. This is a critical opportunity to build up their confidence so that they can succeed in the field. Part of building that confidence is gaining recognition from their classmates and instructors. If females aren't heard as often as males, they don't have the same opportunity to succeed as biology majors."

The authors say new strategies must be put into place.

To affect the participation differences in classes, they recommend using a pre-sorted list of student names and calling on them rather than allowing students to raise their hands. Brownell and her team say that while students may be resistant to the method at first, it is a more equitable way to structure classroom discussions.

"In order to solve the problem, instructors must be aware that it even exists," shared Brownell. "That's really the point of this paper — to illustrate that there are gender differences that should not exist. The next steps are to try to determine what causes these differences and then develop additional strategies that instructors can use to lessen those differences."