How Understanding The Heterogeneous Topocracy Of Twitter Can Help The Future Of Science 2.0
By News Staff | October 31st 2014 07:27 AM | Print | E-mail

To gain followers on Twitter, some supposed social media and SEO "experts" claim that a lot of volume and following a lot of people is the road to popularity.

Not really. The most effective strategy is to already be famous. Due to its imbalanced structure, Stephen Hawking is going to get more followers than you because he is already famous. Once a person with a lot of followers notifies the public he is on Twitter, it takes off much faster than if his social media intern followed 100 people with a few dozen followers. Less popular users can compensate for this by increasing their activity and their tweets but the outcome is costly and inefficient.

A team of scholars from the Technical University of Madrid (UPM) analyzed thousands of conversations and applied a computational model and devised a measure that relates the effort spent to the influence gained by tweeters. The results in Social Networks confirm that the actual structure of Twitter is the key to the influence. It is a heterogeneous network, or rather, one where there is a large number of users with very few followers (61 on median) and a few –very few– with an enormous number of followers (up to 40-50 million).

With this type of distribution, network position or 'topocracy' comes before meritocracy: "Having a larger number of followers is much more important than the user's 'effort' or activity in sending lots of messages," Rosa M. Benito, head of the research team, tells SINC. 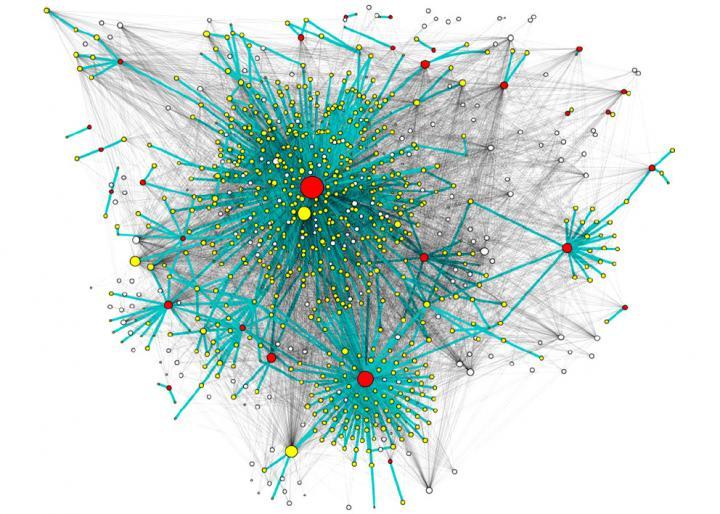 A visualization of the spreading of messages on Twitter (retweets network in green) on the followers network (grey). The nodes represent users and their size is proportional to the number of followers that they have. Red indicates users who have written original tweets and yellow indicates users who have retweeted them. Image adapted by A.J. Morales, R.M. Benito et al.-Social Networks

"However, if the underlying network were homogeneous (something which it is not), users would have approximately the same number of connections and their position on the network would not be important; their influence would depend directly on their activity," establishes the researcher.

According to the study, on heterogeneous networks like Twitter the way in which users send messages does not matter, because there is always going to be a highly influential minority. Tweets that more popular people or institutions send are spread more and have greater impact, even though they send very few, which is also quite usual.

"The data shows that the emergence of a group of users who write fewer tweets but that are largely retweeted is due to the social network being heterogeneous," Rosa M. Benito points out.

The researcher is not exactly encouraging for the majority of tweeters who wish to be more influential: "Ordinary users can gain the same number of retweets as popular users by increasing their activity abruptly. Then it is possible to increase their influence through activity, but it is costly and inefficient".