John F. Kennedy didn't just win the presidential election in 1960 because an alarming number of dead people in Chicago and Texas voted for him, it was only close in the first place because his debate with Vice-President Richard Nixon was televised - and he thought makeup was unmanly. While Kennedy looked healthy and vigorous, Nixon looked pale and sweaty. History was made and politics was changed forever.

Two generations later, a healthy complexion is vital - but looking intelligent is not as important, except for positions that require negotiation between groups or exploration of new markets, find the authors of a paper in Frontiers in Human Neuroscience.

Brian Spisak from the VU University Amsterdam and colleagues studied people's implicit preferences for traits of leaders, such as health, intelligence, and attractiveness, and how they look for information about these qualities in the physical appearance of others.

The researchers focused on facial traits because these provide a wealth of information about individuals. For example, in women as well as men, caring and cooperative personalities are statistically more likely to have a more "feminine" face, due to higher estrogen levels, while aggressive risk-takers tend to have higher testosterone levels and a more "masculine" face. 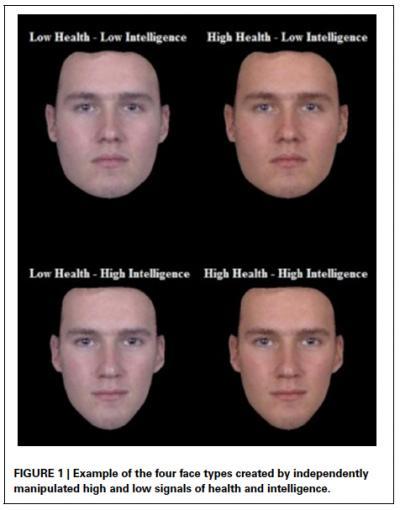 This image was created by independently manipulated high and low signals of health and intelligence. Credit: Spisak, B. et al Front. Aging Neuro (2014)

They asked 148 women and men to imagine that they were selecting a new CEO for a company and to repeatedly pick between two photos of male faces. For each choice, the participants were given a job description that specified the CEO's main challenge. This was either to drive aggressive competition, renegotiate a key partnership with another company, lead the company's shift into a new market, or oversee the stable, sustained exploitation of non-renewable energy.

"Here we show that it always pays for aspiring leaders to look healthy, which explains why politicians and executives often put great effort, time, and money in their appearance. If you want to be chosen for a leadership position, looking intelligent is an optional extra under context-specific situations whereas the appearance of health appears to be important in a more context-general way across a variety of situations," says Spisak, lead author of the paper and Assistant Professor at the Department of Management and Organization of VU University Amsterdam.