In Modern Times, Santa Claus Performers Have To Worry About Interacting With Kids
By News Staff | December 16th 2015 09:58 AM | Print | E-mail 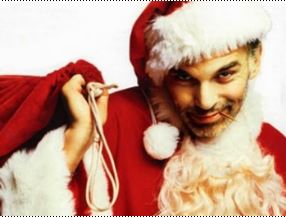 Santa Claus performers struggle with fulfilling the role of jolly old St. Nicholas due to an acute awareness of the sensitivities around interactions with children in modern times, according to 15 formal interviews with Santa performers comprising 14 male Santa performers aged between 52 and 81 and one female grotto assistant who performed in the guise of an elf, aged 32.

As the author of the study, Philip Hancock of the University of Essex, explains, "This relationship [between child and Santa Claus performer] has the potential to result in a condition of misrecognition as a consequence of a cultural re-association of the character with a form of exploitative or perverted male sexuality [...] As the interviews developed [...] what became increasingly apparent was the sense of unease, and even threat, that many of them experienced."

As one Santa in the study commented, "This is not an area we talk about an awful lot because too much is made of it, but there is a slight, I think nervousness because everyone has this fear in the mind that everyone who's an old bloke is a pervert is some way."

In order to keep up the viability of the Santa Claus character as an innocent and benevolent figure while ensuring they can stay protected from accusations, the performers "engage in various techniques of self-management" including making sure that a second, preferably female, member of staff- a helper or 'elf' - is always nearby.

As Hancock also notes, however, "Both parents and children are, perhaps unsurprisingly, often ignorant of the rules now structuring the encounter between performer and child, and will often try to force physical contact by either hugging or jumping up onto the performer. Thus usually forces the performers to choose between either the rules, or what they consider to be the responsibility towards the child as the embodiment of the ideal of Santa Claus."